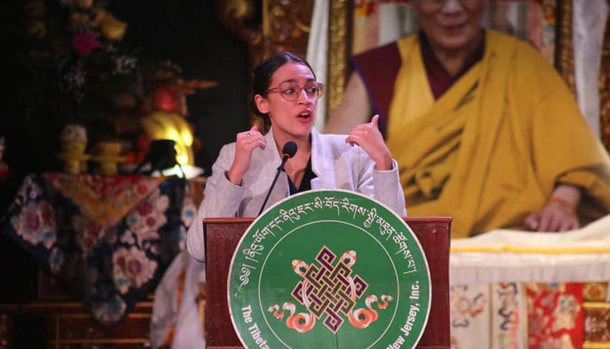 Washington, D.C. — To mark the 61st Anniversary of the Complete Control of Tibet by the People's Republic of China, U.S. Congresswoman Alexandria Ocasio-Cortez, released a statement saying "For Decades, the Tibetan people have bravely fought for their freedom."

The office of the U.S. Congresswoman Alexandria Ocasio-Cortez released the following statement in observance of the 61st anniversary of Tibetan Uprising Day, which commemorates resistance to occupation by Chinese government forces in Tibet:

"For Decades, the Tibetan people have bravely fought for their freedom. It is the responsibility of all those of us who value freedom of speech and expression to stand with them against China's gross human rights abuses."

"I am proud to stand with the Tibetan residents NY-14 and all those across the country in their righteous fight against persecution,” U.S. Congresswoman Alexandria Ocasio-Cortez said in her statement issued on March 10, 2020.

"On behalf of the New York City March 10 organizing committee and all the Tibetans inside and outside of Tibet, we thank Congresswoman Ocasio-Cortez for standing up with Tibetans on the occasion of the 61st Tibetan National Uprising Day," the U.S. Congresswoman concluded.

Rep. Alexandria Ocasio-Cortez (D-NY) attended the 2019 Tibetan New Year event – a chance not only to celebrate Tibetan heritage but also to extol the Tibetan-American community’s vital role in the country’s future.