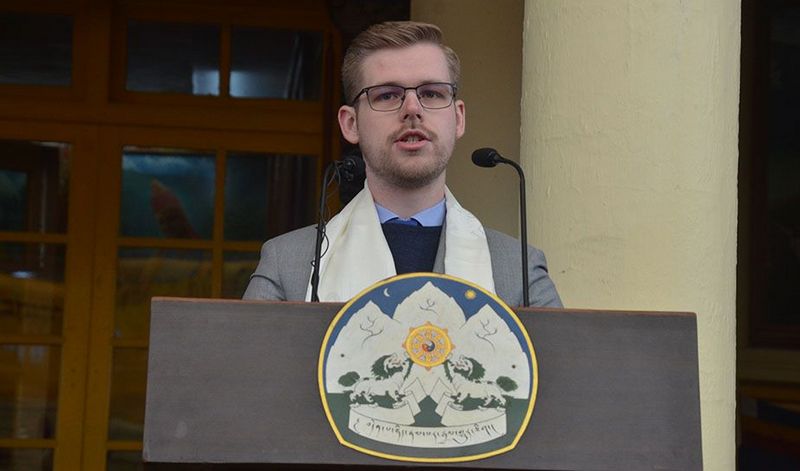 Dharamshala, India — To mark the 61st Anniversary of the complete control of Tibet by the People's Republic of China, Czech Republic lawmaker Frantisek Kopriva, issued his March 10 message saying, "I reminded the similar fate of the Czech Republic, which also experienced the occupation and together we will continue to defend fundamental human rights and justice around the world!."

While expressing his happiness at receiving an invitation to attend the Tibetan National Uprising Day, Kopriva addressed the gathering, by thanking everyone for their warm hospitality. The Czech politician then spoke about how and when the Czech Parliamentary group of friends of Tibet was established in 2018 and today the support group has 53 members strong, come from all political parties in the Czech Republic.

Three weeks ago, the support group had organised an exhibition in the Czech Parliament on "Tibet through the eyes of the children" Which was partaken by students across the country and similarly, Czeck MPs were raising awareness about Tibet and its environmental issues.

Kopriva also shared the good news that one of his colleagues recently elected to the European Parliament and ensured that they will raise the issue ot Tibet there as well as internationally.

He also mentioned a Tibetan NGO named Lungta based in the country, which promotes the flag tor Tibet and that Tibetan flags would be raised across the Czech Republic, including municipality halls, libraries, and schools.

The Czech MP further said that members of the Tibet support group to hold a protest in front of the Chinese embassy to denounce China over its violations of human rights and international laws and expressed their determination to continue their efforts. He then read out the declaration of support from the Czech Parliament which included former Foreign ministers, Speaker, and chairs of the deputies committee and others.

"At a memorial event for the 61st Anniversary of Tibetan National Uprising, Dana Balcarová and I gave greetings on behalf of the whole Czech Parliamentary group of friends of Tibet, whose Chamber parts I chaired," Kopriva posted his statement on social media, Facebook page.

"In my speech, I reminded the similar fate of the Czech Republic, which also experienced the occupation and the legacy of Václav Havel, as the first president invited his Holiness Dalai Lama to the Czech Republic. First of all, however, we sent a clear message that Czech people support for Tibet. And together we will continue to defend fundamental human rights and justice around the world!".