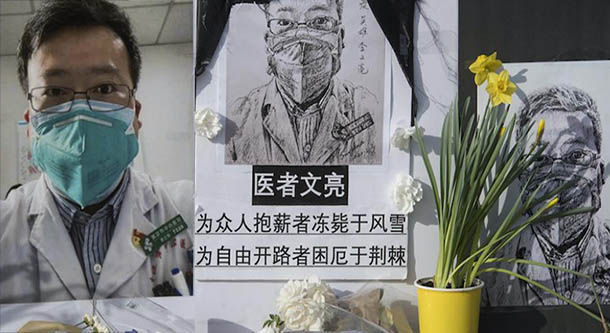 Paris — Reporters Without Borders (RSF) shows that, without the control and censorship imposed by the authorities, the Chinese media would have informed the public much earlier of the severity of the coronavirus epidemic, sparing thousands of lives and perhaps avoiding the current pandemic.

In an analysis published on March 13th, researchers from the University of Southampton suggest that the number of cases of coronavirus in China could have been reduced by 86% if the first measures, which were taken on January 20th, had been implemented two weeks earlier.

The Paris-based world media freedom watchdog demonstrates, based on the events in the early days of the crisis, that without the control and censorship imposed by the authorities, the Chinese media would have informed the public much earlier of the seriousness of the epidemic, saving thousands of lives and possibly avoiding the current pandemic.

October 18: Chinese press could have reported the chilling results of a pandemic simulation.

The John Hopkins Center for Health Security, in partnership with the World Economic Forum and the Bill and Melinda Gates Foundation, carries out a simulated coronavirus pandemic on October 18th, 2019, and alerts the international community to the chilling results: 65 million deaths in 18 months.

If the Chinese internet were not isolated by an elaborate system of electronic censorship and the media were not forced to follow the instructions of the Communist Party, the public and the authorities would have undoubtedly been interested in this information coming from the United States, which echoed the SARS (severe acute respiratory syndrome) epidemic of 2003. SARS infected 8,000 people and caused more than 800 deaths, mostly in China.

December 20: the Wuhan city authorities could have informed journalists

One month after the first documented case, the city of Wuhan already has 60 patients with an unknown SARS-like pneumonia, several of whom have frequented the Huanan fish market. Despite the situation, the authorities do not see fit to communicate this information to the media.

If the authorities had not hidden from the media the existence of an epidemic outbreak linked to a very popular market, the public would have stopped visiting this place long before its official closure on January 1st.

December 25: Doctor Lu Xiaohong could have expressed fears to the press

Doctor Lu Xiaohong, the head of gastroenterology at Wuhan City Hospital No. 5, begins hearing of cases of infection affecting medical staff on December 25 and suspects from the first week of January that the infection is transmissible between humans.

If journalists' sources in China did not face severe penalties ranging from professional reprimand to heavy prison terms, Doctor Lu Xiaohong would have taken responsibility for alerting the media, forcing the authorities to take action, which only happened three weeks later.

December 30: whistleblowers’ early warning would have been picked up by the media

The director of the emergency department at Wuhan Central Hospital, Ai Fen, and a group of doctors launch an alert regarding a “SARS-like coronavirus.” Eight of them, including Doctor Li Wenliang, who later died from the illness, will be arrested by Wuhan police on January 3rd for circulating “false rumors”.

If the press and social media had been able to freely relay the information transmitted by whistleblowers on December 30th, the public would have realised the danger and put pressure on the authorities to take measures limiting expansion of the virus.

December 31: social media would have relayed the official alert in China

China officially alerts the World Health Organisation (WHO) on December 31st but at the same time forces the WeChat discussion platform to censor a large number of keywords referring to the epidemic.

Without censorship, the social network WeChat, which has a billion active users in China, could have enabled journalists to broadcast reports and precautionary advice contributing to better compliance with the rules recommended by the health authorities.

January 5: the scientific media would have disseminated the coronavirus genome earlier

Professor Zhang Yongzhen's team at the Shanghai Public Health Clinical Centre manages to sequence the virus on January 5th, but the authorities seem reluctant to make the genome public. On January 11th, the day China confirms its first death from the virus, the researchers leak information on open source platforms, which will result in the punitive closure of their laboratory.

If the Chinese authorities were transparent, they would have immediately communicated the coronavirus genome sequence to the scientific media, saving the international community precious time in their research for the development of a vaccine.

January 13: the international community would have anticipated the risk of a pandemic

The first case of coronavirus infection outside of China, a tourist from Wuhan, is reported in Thailand.

If the international media had had full access to information held by the Chinese authorities on the scale of the epidemic before January 13th, it is likely that the international community would have taken stock of the crisis and better anticipated it, reducing the risk of the epidemic spreading outside China and possibly avoiding its transformation into a pandemic.