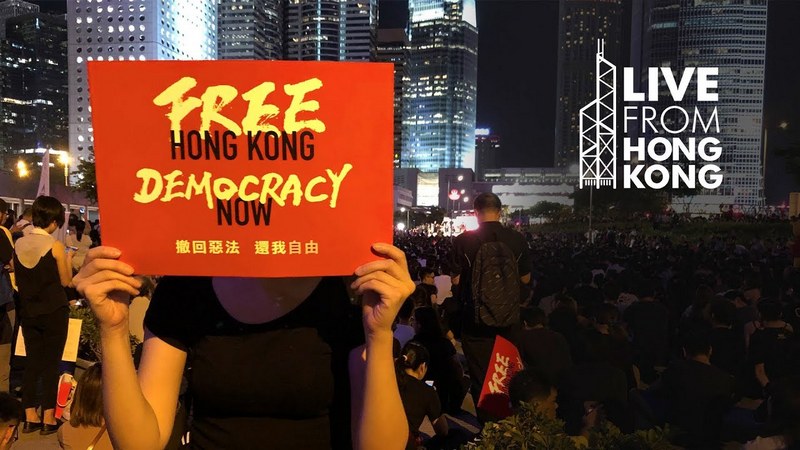 Dharamshala — The new security law passed by the communist-authoritarian assembly in China criminalises any act of secession, subversion, terrorism, or collusion with foreign forces. Within minutes, the effect was obvious, Hongkonger democracy activists in Hong Kong began to quit, fearful of the new law, and the punishment it allows.

Tibetans, Taiwanese, and Uyghurs joined hand-in-hand with the international communities to express their solidarities with the people of Hong, a coastal city, fallen under the total control of a police state of the communist-authoritarian regime in China.

"The move severely impacts Hong Kong society's freedom, human rights, and stability," said cabinet spokesman Evian Ting, as the Government of Taiwan, warned its citizens of an increased risk in visiting Hong Kong. "The government strongly condemns it and reiterates its support for the people of Hong Kong as they strive for democracy and freedom," the cabinet spokesman added.

"From now on, China will have the power to impose its own laws on any criminal suspect it chooses," said the head of Amnesty's China team, Joshua Rosenzweig. "The fact that the Chinese authorities have now passed this law without the people of Hong Kong being able to see it tells you a lot about their intentions," Rosenzweig further said, adding: "Their aim is to govern Hong Kong through fear from this point forward."

"The law marks the end of Hong Kong that the world knew before," said Joshua Wong, Secretary-general and founding member of pro-democracy group Demosisto, and a key figure in the 2014 Umbrella movement, after announcing he was quitting Demosisto. "From now on, Hong Kong enters a new era of the reign of terror, just like Taiwan's White Terror, with arbitrary prosecutions, black jails, secret trials, forced confessions, media clampdowns and political censorship. With sweeping powers and ill-defined law, the city will turn into a secret police state. Hong Kong protesters now face high possibilities of being extradited to China's courts for trials and life sentences," Wong further added.

On Facebook, Nathan Law, founding chairman of Demosisto, a former student leader said the law marked the start of a "bloody cultural revolution". But, despite quitting Demosisto, he said he would continue to fight for democracy "in a personal capacity". He added on Twitter: "Stay strong, my friends. Hong Kong people will not give up." Hours after Law, Wong, and others quit Demosisto, the group announced it would disband entirely. "We will meet again," it said.

Tibet and Uyghur groups joined the international communities and expressed their concerns about human rights in Hong Kong and say the world governments must condemn the imposition of national security Law and violations of fundamental freedoms in Hong Kong. They expressed as saying they stand in solidarity with the people of Hong Kong who is yet again subject to pain and suffering at the hands of communist totalitarians and unjust system.

In a statement, the International Tibet Network and World Uyghur Congress said they "strongly condemn the Chinese government’s passing of a National Security Law for Hong Kong without the consultation of the people of Hong Kong; a grave turning point for freedom in Hong Kong and a violation of binding international legal obligations under the 1984 Sino-British Joint Declaration.

This latest imposition is a further consolidation of Beijing’s power. We express our extreme concerns over the rapid erosion of Hong Kong political freedoms and echo fears that this new draconian law will only be used to trample human rights and lead to the severe repression of all dissenting voices. The speed at which the Chinese authorities have imposed this law also signals Beijing’s eagerness to clamp down on pro-democracy activists ahead of elections in Hong Kong in September, further tightening its grip. Under the law, Hongkongers convicted of “national security crimes” could risk life imprisonment.

“The passing and implementation of the National Security Law officially mark the Chinese Communist Party takeover in Hong Kong,” said Penghsuan Lee, East Asia Coordinator of International Tibet Network. “Hong Kong has become the latest victim of Beijing’s authoritarian rule, and we only have to look at the example of China’s occupation in Tibet and East Turkestan to see how this will pan out. Hong Kong is facing a real-time tragedy and the lives and freedoms of millions are now at stake. World leaders and the international community must respond to the desperate calls for freedom from the Hong Kong people.”

The people of Hong Kong, particularly the youth, have shown the desire for fundamental rights and freedoms cannot be crushed, no matter how ruthless China becomes. China’s failure to honour its commitment to the ‘One-country, Two-systems’ agreement has awakened a whole new generation of Hongkongers striving for a truly democratic society.

‘’The Chinese Communist Party is undermining the autonomy, human rights and freedoms of the people of Hong Kong before our very eyes. If something is not done, Hong Kong may suffer the same brutal treatment as Uyghurs and Tibetans. Enough is enough, the international community must take action, for all of our sakes,” said Dolkun Isa, President of the World Uyghur Congress.

“These blatant actions by Beijing have far-reaching consequences and pose an extreme risk which requires more than mere lip-service; world leaders and Asian nations must come together and enforce punitive measures to protect the people of Hong Kong,” said Tenzin Jigdal, International Coordinator for Tibet Network.