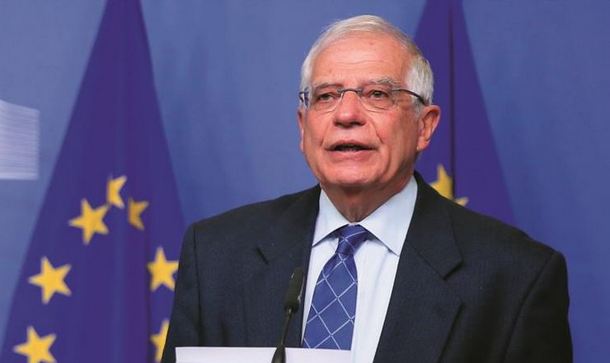 Josep Borrell, the high representative of the union for foreign affairs of Eurpean Union. Photo: File

Brussels – With His Holiness the 14th Dalai Lama just having turned 85, the European Union’s foreign policy chief has expressed the EU’s position on his succession, stating that it opposes any interference in the process by the authoritarian communist government in China.

“The selection of religious leaders should happen without any government interference and in respect of religious norms,” Josep Borrell said July 16, adding that, “In the framework of the EU-China Human Rights Dialogue, the European External Action Service has repeatedly expressed the position that China needed to respect the succession process of the Dalai Lama.”

Borrell, the EU’s high representative of the union for foreign affairs, was answering a parliamentary question tabled earlier this year by a group of five members of the European Parliament from four political factions: Francisco Guerreiro (the Verts/ALE political group) of Portugal, Petra De Sutter (Verts/ALE) of Belgium, Petras Auštrevičius (Renew Europe) of Lithuania, Hannes Heide (S&D) of Austria and Aušra Maldeikienė (PPE) of Lithuania.

“ICT welcomes the statement of the High Representative, which demonstrates the EU’s unequivocal support for the religious freedom of Tibetans,” ICT EU Policy Director Vincent Metten said on Monday, July 20, 2020. “What is now needed is a more formal statement on behalf of the 27 EU Member States in order to demonstrate the EU’s unified approach to this critical issue.

In line with the EU guidelines on the promotion

In recent years, the Chinese government has indeed repeatedly said that when the Dalai Lama passes away, it will appoint its own Dalai Lama to replace him. It has also adopted a number of laws and regulations to legitimize its interference in the issue, including revised Regulations on Religious Affairs, which require that ‘living Buddhas’ be approved by the government.

China’s position not only ignores Tibetans’ centuries-long history of selecting the Dalai Lama without foreign interference but also violates their fundamental right to religious freedom and will inevitably add to the long-.

Reactions to this blatant assault on Tibetans’ religious freedom have been mounting in recent months, most notably in the US, where the House of Representatives passed the Tibetan Policy and Support Act at the beginning of the year. If signed into law, the TPSA will make it official US policy that only Tibetan Buddhists can decide on the Dalai Lama’s succession and will sanction Chinese officials who attempt to name their own Dalai Lama in the future.

The governments of the Netherlands, Belgium, and Germany have also officially stated that it is up to the Tibetan, said Vincent Metten, Director of the International Campaign for Tibet’s EU Policy.

Below is the full text of the parliamentary question and answer by Josep Borrell.

Subject: Chinese legislation impacting the issue of succession of the Dalai Lama and Tibetan Buddhist leaders

The EU expects that China will respect the Dalai Lama’s succession ‘in accordance with Tibetan Buddhism norms’. The Chinese Government has adopted several laws aimed at reshaping these norms in order to legitimise its interference in the appointment of Tibetan Buddhist leaders, including the ‘State Religious Affairs Bureau Order No5’ and the revised Regulations on Religious Affairs. The 14th Dalai Lama has stated that if a decision to continue the institution of the Dalai Lama is made, the responsibility will primarily rest with the Gaden Phodrang Trust, which will be informed by his written instructions.

1. Does the VP/HR consider that the two above mentioned laws respect international human rights standards of freedom of religion or belief?

2. Does the VP/HR agree that the succession of the Dalai Lama should be decided by the Tibetan Buddhist religious community upon his instructions, without any government interference?

3. Given that the EU guidelines on the promotion and protection of freedom of religion or belief recognise that freedom of religion includes ‘the freedom to select and train leaders’, what steps does the VP/HR intend to take in response to the Chinese Government’s interference in the succession of the Dalai Lama?

High Representative/Vice President (HRVP) Borrell has recently raised concerns for the situation in Tibet, during his Strategic Dialogue with Chinese Foreign Minister Wang Yi, on 9 June 2020. Restrictions on freedom of religion or belief and on the rights of minorities in Tibet have been among topical concerns for the EU for a number of years, as expressed also publicly including in multilateral fora.

The selection of religious leaders should happen without any government interference and in respect of religious norms. The implementation of any legal provision should take these principles into account.

The Chinese revised regulations on Religious Affairs pose serious questions in this respect and it will be therefore important to monitor their implementation.

In the framework of the EU-China Human Rights Dialogue, the European External Action Service has repeatedly expressed the position that China needed to respect the succession process of the Dalai Lama.

This was recalled also during the last meeting held in Brussels on 1 April 2019. The HRVP will continue to follow closely this issue and remains committed to reiterate this position if events so require.