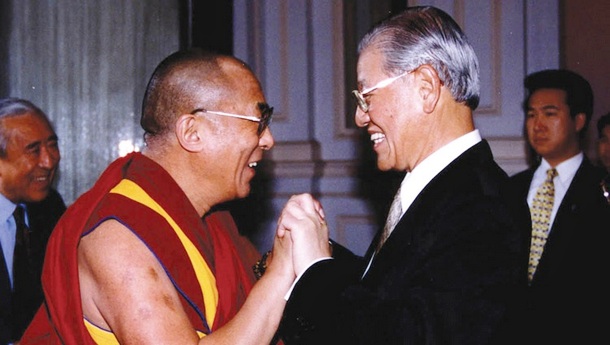 Dharamshala, India — Tibetan spiritual and political leaders, including His Holiness the 14th Dalai Lama, President of the Tibetan government in-Exile Dr Lobsang Sangay and Speaker of the Tibetan Parliament-in-Exile Pema Jungney offered words of condolence for former Taiwan President Lee Teng-hui who died at age 97, praising him for his support for Tibet.

Lee Teng-hui was Taiwan’s first native-born and directly elected president, serving from 1988 to 2000, emphasizing his role in guiding Taiwan through the transition from authoritarianism to democracy. Lee considered the "father of Taiwan's democracy", has died at the age of 97 from septic shock and multiple organ failure at Taipei Veterans General Hospital at 7:24 p.m. Thursday, after being hospitalised for nearly six months.

On receiving news that former Taiwanese President Lee Teng-hui had passed away, the Tibetan leader wrote to express his condolences to his widow Mrs Tseng Wen-hui and members of her family, according to the office of His Holiness the Dalai Lama.

“As you know,” he wrote, “I had the honour of meeting your husband during my first visit to Taiwan in 1997 when he was the first popularly elected President. Subsequently, we met again in Taiwan and at Peace Forums elsewhere and I regard him as a personal friend.

“His contribution to Taiwan's democratic development was an exceptional achievement. Today, Taiwan is a vibrant and prosperous democracy with a rich cultural heritage. Perhaps the best tribute we can pay him is to remember his courage and determination and emulate his dedication to democracy.”

The Tibetan Nobel Peace laureate concluded by observing that President Lee Teng-hui was an ally of the Tibetan people and did what he could to support them.

Sikyong Dr Lobsang Sangay, the democratically elected political leader of the Tibetan people, today condoled the demise of the former Taiwan President. In his condolence message, Sikyong said, “On behalf of the Central Tibetan Administration and the Tibetan people, I offer our deepest condolences on the passing of former President of Taiwan, Mr Lee Teng-hui. His demise is grieved not only by the people of Taiwan but Tibetans all over the world. As the island’s first democratically elected president, Mr Lee hosted His Holiness the Dalai Lama for the first time to Taiwan in 1997.'

“Mr Lee Teng-hui was the first president of Taiwan to host His Holiness the Dalai Lama in Taiwan. It was also during that meeting that His Holiness met with then-Vice President Lien Chan, and for the first time, introduced the CTA’s Middle Way Approach to people of Taiwan. The historic meeting between Mr Lee and His Holiness forged a new chapter of friendship and solidarity between the two peoples,” Sikyong said.

“A visionary and a Cornell economist, Mr Lee was also known as the ‘Mr Democracy’ for his instrumental role in Taiwan’s democratization. He presided over unprecedented democratic reforms, including the first direct presidential election of 1996, which he won by landslide. With his courage and foresight, Mr Lee steadfastly championed the cause of Taiwan nation and steered Taiwan through the historic transition from martial law to a full-fledged democracy. History will always remember him as the founding father of Asia’s most dynamic and vibrant democracy.“

The President of the Tibetan government in-Exile previously knowns the Government of Tibet concluded, saying, “His legacy will continue to inspire us. Once again I send my most heartfelt condolences to his family.”

Speaker of the Tibetan Parliament-in-Exile, Pema Jungney also offers his deepest condolence to the family and followers of former President of Taiwan who passed away at the age of 97.

“On behalf of all the Tibetan people in and outside of Tibet, the 16th Tibetan Parliament in Exile would like to convey its deepest and heartfelt condolence to the family of President Lee and to the people and the government of Taiwan for the great loss.”

“As the first democratically elected President of Taiwan, Mr. Lee Teng Hui played a pivotal role in Taiwan’s democratisation and demonstrated remarkable leadership during his tenure from 1996-2000. His legacy will continue to inspire all of us. Mr. Lee has dealt with China’s drive to control Taiwan and envisioned Taiwan to be a country of democracy, freedom, human rights, and dignity which clearly shows that he is a respectable man with values. Today, Taiwan stands equally with many other nations,” he concludes.

According to media reports, Taiwanese President Tsai Ing-wen said later on her Facebook page that as the head of state, she expressed her heartfelt condolences and sympathy on behalf of all the people in the nation and has also directed the Presidential Office and relevant government agencies to help with funeral arrangements. The former president, as the pioneer in his time, had twice pursued overseas studies and contributed what he learned to his home country, Tsai added.

Lee took office as Taiwan's president in 1988. He pushed for the nullification of the Temporary Provisions Against the Communist Rebellion in 1991, constitutional amendments, the complete re-election of the Legislature, and direct election of the president. He was therefore dubbed "Mr. Democracy" for ending autocratic and authoritarian rule.