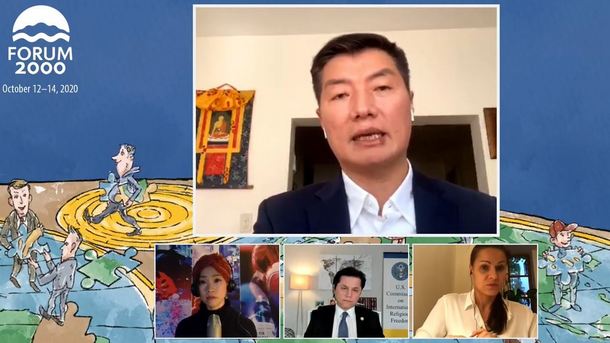 Prague — Criticising China’s lack of transparency and disregard for human rights for having caused such a global level crisis, the leader of the Tibetan government in-Exile has warned the European nations in particular of massive economic and social harm that China is capable of. The Tibetan President Dr Lobsang Sangay has strongly alarmed that the world must realise the real China and not the facade they put up of being a powerful nation willing to play by the rules.

The human rights in China under the leadership of President Xi-Jinping has gone from bad to worse and the World Report for the last couple of years is a testimony to that. Human rights challenge posed by China is serious and the world is today paying a huge price both economically and socially.

“We are at a critical juncture where we have to decide what the US Secretary of State, Mike Pompeo said a few weeks ago i.e either to change China or let China change us. I have voiced the exact concern two years earlier in 2018 at Geneva Forum that ‘either we transform China or China transforms us,” remarked President Dr Lobsang Sangay addressing the masked diplomacy of China intended to undermine the values of human rights.

Dr Sangay was speaking at the Václav Havel Human Rights Symposium on China organised by the Forum 2000. He is joined by panellists Nury A. Turkel, Commissioner, U.S. Commission on International Religious Freedom, USA/China, and Loretta Lau, a Hong Kong-based artist.

Dr Sangay criticised China’s lack of transparency and disregard for human rights for having caused such a global level crisis. He warned the European nations in particular of massive economic and social harm that China is capable of. He alarmed that the world must realise the real China and not the facade they put up of being a powerful nation willing to play by the rules.

Citing the recent event of the Nobel Peace Committee awarding the Nobel Peace Prize to the UN World Food Programme, Dr Sangay refuted the decision and said that the award should have been given to the democracy activists in Hong Kong or the people of Uyghur whose bravery and fight for democracy have inspired the world.

He added that not awarding them was a deliberate attempt to appease China following China’s Foreign Minister, Wang Yi’s Oslo visit in late August who warned the Norwegian government against repeating its ‘decade ago mistake’ when the same prize was awarded to Liu Xiaobo.

“It is clearly evident that the Chinese government is not only violating human rights but they are now impacting the global rule and order. This is unfortunate,” said Dr Sangay.

China is also attempting to restructure and influence the UN. For instance, of the 15 agencies at the UN, major positions are occupied by Chinese diplomats playing a key role at the UN. Such an absurd move will likely have an impact on the world order.

“We must be absolutely on our guard now that the tentacles of the Chinese government have already penetrated profoundly in the international organisations such as the UN and WHO etc”.

Dr Sangay attributed the large presence of Chinese diplomats in the global organisations as an easy passage for China to get away with the human rights violations of Tibetan people, Uyghurs, Hong Kongers, and Mongolians.

Dr Sangay impelled that the world must now see the real image of China given the continuous human rights violations in Tibet and Xinjiang than to get intimidated by its disguise.

“Meanwhile, some of the European leaders and world leaders are in praise of China’s poverty alleviation programme while overlooking the fact that such a program are enforced at the cost of the rights of the Uyghurs and the Tibetans.”

Dr Sangay asserted that such a program in which youth are uprooted from their cultural setting and traditional livelihoods on the pretext of developing ‘new skills’ are often the ones without employment.

Even though the Tibetans have been abused of their rights for the last 60 years, the Chinese government has been repeatedly exempted from punishment and consequences for their actions. The reluctance of the global leaders to go against China because of economic and trade relations, said Dr Sangay, has given the Chinese government a much-needed hope to continue with their aggressive policies and the world will continue to pay a heavy price for it unless we transform China before it is too late.