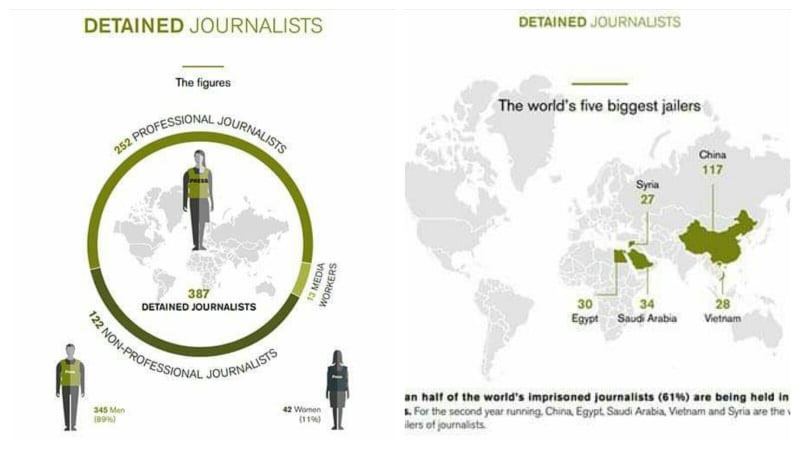 Portray of Journalists held hostages, detained and missing in some of the most restricted places in the world. Photo: RSF

Dharamshala, India — China yet again becomes the most hostile and worst country for journalists in the world in 2020 according to a report by Reporters Without Border (RSF) titled Round-Up 2020.

According to the reports of Round-Up 2020, journalists following under the categories of detained, missing and held hostage mostly recorded in China. It took the number one position of the top five jailers of journalists recording a total of 117 imprisoned journalists. China is known for its lack of freedom, expressions and movement specially for journalists worldwide. Chinese journalists like Cai Wei and Chen Mei are imprisoned and still in Chinese custody in relation to provision of information on 19-Covid pandemic issues.

The 2020 Round-up reportedly recorded a total of 387 journalists detained, 54 held hostages and 4 missing while reporting from some of the most restricted places in the world. While discussing the five most restricted nations for journalists this year alone China has arrested 117 journalists followed by Saudi Arabia 34, Egypt 30, Vietnam 28 and Syria 27. More than 61% of the world’s jailed journalists are held in these five countries.

A number of 450 journalists detained without a proper trial for reporting in connection to the ongoing pandemic. March and April alone have recorded 48 journalists who have been registered under law and 15 journalists within one week to a month under probation in India. More than 274 journalists confined this year alone and more 250 journalists imprisoned in relation to the nature of their works and criticising the governments for its function in handling the pandemic.

With an increase in the detained women journalist by 35% in the past. This year the number of women journalists being jailed increased by 11% as compared to the 8% in last year. China has retained the Number one ranking with a total of 117 imprisoned journalists, of whom nearly a third (45) are non-professional.

According to the report, “The communist regime’s persecution does not solely target Chinese journalists. Cheng Lei, a Chinese-born Australian journalist working for a Chinese state TV broadcaster, has been held incommunicado since 14 August 2020. Gui Minhai, a Chinese-born Swedish citizen who lived in Hong Kong and published books based on investigative reporting, was kidnapped during a visit to Thailand in 2015 and was taken to China, where he was sentenced to ten years in prison in February 2020 for ‘illegally providing intelligence to foreign countries’ as stated in the Round-Up 2020 report of RSF.