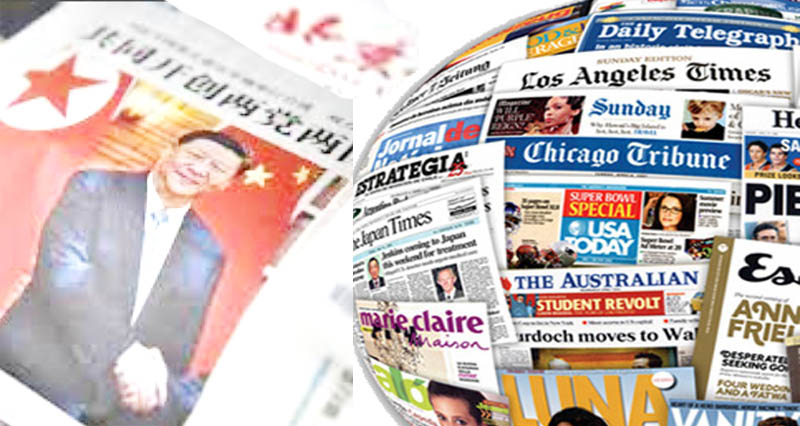 Chinese state-run media faced deepening isolation as a growing number of international media started to stop accepting funds in exchange for running propaganda articles. This is due to the fact that dangers posed by the CCP propaganda articles and Chinese influence over our media and democracy.

Last week, news emerged that the Australian media group Nine Entertainment, whose publications include the Sydney Morning Herald, the Australian Financial Review, and The Age, also quietly dropped their partnership with China Daily. The newspapers, previously under the ownership of Fairfax Media, had been running China Daily articles since 2016 and also appear to have severed ties over the summer.

These successes have given added momentum to a campaign that has already seen the Economist and the UK Daily Telegraph cancel deals with Chinese state media companies to run their content, following decades of tireless campaign work by activists to draw attention to the dangers posed by Chinese influence over our media.

Outlets such as China Daily and Beijing Review, which are under the control of the Chinese Communist Party (CCP), have entered into partnerships with media outlets around the world, paying them millions of dollars worth of funds in exchange for running propaganda articles. The content usually appears as supplements called China Watch, which are designed to project the CCP’s trade, development, and foreign policies to foreign audiences, as well as whitewashing human rights abuses in Tibet, Uyghur regions, and Hong Kong. In recent years, China Watch supplements appearing in American and British newspapers have hailed the CCP’s response to the coronavirus outbreak, presented China’s repressive crackdown against the Uyghur people as a “law-based campaign of deradicalisation” and claimed that Tibetans, rather than living under massive state repression, have enjoyed decades of development and democratic reform.

The campaign continues to target a number of other media outlets including German newspaper Handelsblatt and the Los Angeles Times, which according to China Daily’s FARA report, received $340,000 for advertising campaigns during the May-October 2020 reporting period. The most recent China Watch supplement to appear in the Los Angeles Times, dated 29 November, featured a “Tibet Special”, which included a particularly concerning article stating that Tibetans are “embracing new changes in life” in what is, in reality, a mass labour programme involving over half a million Tibetans, many of whom are rural Tibetans who have been forced from their land and in some cases have undergone ideological “re-education”.

The editor of the Los Angeles Times has been contacted twice with no response, prompting a new action calling in the newspaper to follow the example of other newspapers and reject China Daily.

“The news that further newspapers have taken the decision to scrap these shameful paid propaganda supplements is something that can be celebrated by Hongkongers, Tibetans, Uyghurs, and other communities that not only have to struggle for their freedom but also struggle with the CCP’s lies," Jones said.

We will enjoy this victory and then seize the momentum to press on and challenge those media outlets that still think it is acceptable to print the Chinese government’s dangerous lies in exchange for money. These propaganda pieces are disappearing from more and more newspapers - our movement is winning,” he added.

“This is a major victory and a moment to celebrate. The Chinese government has stifled media freedoms in Tibet for decades and, by accepting money from the Chinese government to hold propaganda The Wall Street Journal has been complicit in the crackdown on the freedom of Tibetans, Uyghurs, Chinese, and all human rights defenders who risk their lives on the frontlines to expose the realities of life under Chinese rule," Gloria Montgomery, Campaigns Coordinator at International Tibet Network said.

"We will build on these recent victories to ensure that other media outlets, including the LA Times, stop running this pro-Beijing content, betraying not only the victims of China’s rampant human rights violations but also threatening the very nature of our long-cherished press freedoms at home,” Montgomery added.

“Newspapers like The Wall Street Journal benefit society by giving their readers the facts honestly and accurately. Sharing paid propaganda from the Chinese government is completely at odds with that mission," said Bhuchung K. Tsering, Vice President of International Campaign for Tibet.

"In this age of disinformation, all of us must pay closer attention to the lies infecting our democratic societies from Beijing, including lies about China’s ruthless occupation of Tibet, which has brutalized the Tibetan people for more than six decades. We urge other news outlets currently carrying Chinese propaganda as paid news to stop doing so," Tsering added.

“This is a huge victory for media freedoms in Australia. The partnership between China Daily and Australian media outlets, such as the Sydney Morning Herald, has long harmed the Australian public’s confidence in press freedoms in our country," said Dr Zoë Bedford, Executive Officer of Australia Tibet Council.

"This decision will go some way in restoring that confidence and will send Tibetans suffering under China’s brutal occupation a clear message that we will continue to fight for their human rights and resist the Chinese government’s influence on our soil,” Bedford further said.