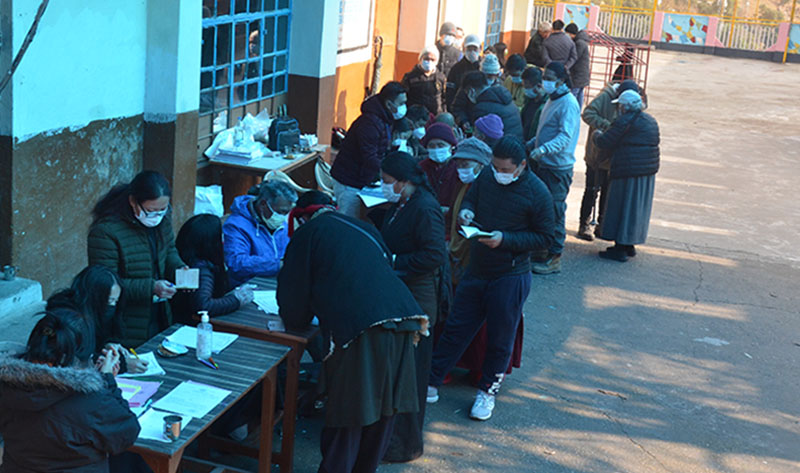 Dharamshala, India — The preliminary election for 2021, Sikyong of the Central Tibetan Administration (CTA) and the members of 17th Tibetan Parliament-in-Exile (TPiE) was held in over 30 countries around the world, on January 3, 2021.

Tens of thousands Tibetans in Exile exercise their democratic rights by cast their votes to elect their future President and the members of TPiE at different allotted places respectively. More than 80,000 Tibetans in 30 to 40 countries have registered their green books to vote for 2021 preliminary elections, which will decide which parliamentary and presidential candidates will run in the final polls on April 11, 2021.

Monks, nuns and families stood in long queues waiting to vote at various locations, including Lhagyalri, Tibetan Institute of Performing Arts (TIPA), Yongling School in McLeod Ganj and Gangchen Kyishong where the headquarter the CTA based. The pool areas opened at 8.0 am and end at 5pm on Sunday.

“Democracy that the Tibetans in exile communities have is historically important and could proudly walk shoulder to shoulder alongside with other democratic nations of the world,” stated Dr Lobsang Sangay, the current political head of Tibet. “The preliminary vote for 2021 Sikyong and parliamentarians are being cast as His Holiness the 14th Dalai Lama’s conferment of democracy to Tibetans and our elders’ handwork have come into fruition. This democracy we have is historically significant,” said the political leader of Tibet on preliminary vote while casting his vote on January 3, 2021. 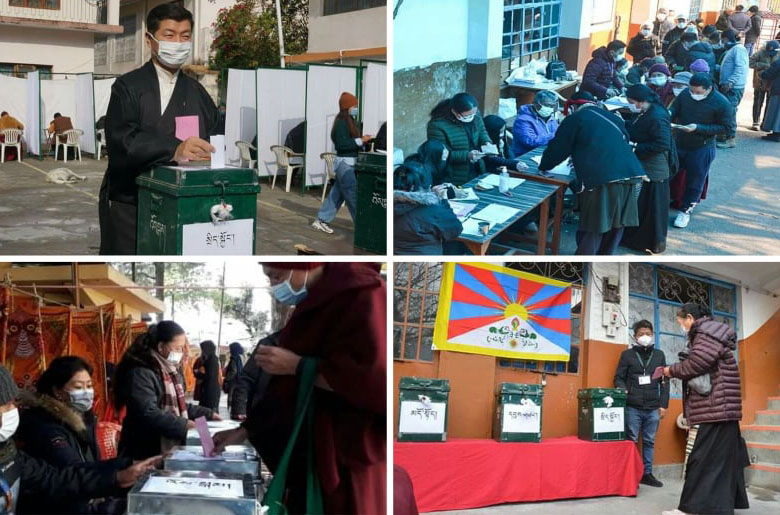 "There are not many Tibetans in exile communities but Tibetans are able to enjoy democratic rights under the grace of His Holiness the 14th Dalai Lama", he explained. "Tibetans are scattered in more than 30 countries but as Tibetans with the green books in their hands, they took democratic rights provided by CTA and cast votes for their future leaders proudly" he added.

“The Tibetan democracy in exile is also the aspiration of the Tibetans inside Tibet,” reminded Sikyong. Adding that many Chinese in China aspire to have democratic form of governance. It is important for the Republic of China to take examples from how Tibetans in exile communities and Taiwan people exercise their democratic values.

“Many Tibetan brothers and sisters are still suffering under China’s ruthless and repressive policies. Many of them are still in prisons apart from the self-immolators. They will never be forgotten by the Tibetans outside Tibet,” said the president of CTA. Affirming that as per the principles of Middle Way Approach, Tibetans will continue to fight for a genuine autonomous Tibet for all Tibetans.

Dr Sangay also sends his best wishes and admiration for all candidates participating for the 2021 Sikyong and members of TPiE. Noting that whoever emerged victorious as the elected leaders, it is important to take responsibility of CTA and work as per the wishes of His Holiness the Dalai Lama of Tibet. He asked the fellow Tibetans to stand and support the elected political leaders in unity while strictly following the regulations and guidelines of Covid-19 Desk Force.

The 2021 general election is the third direct election of the Tibetan leadership since the complete devolution of political authority by His Holiness the Dalai Lama in 2011.

More than 80,000 Tibetans have registered their green books to vote for 2021 Tibetan political leaders. January 3, 2020 is the date for the preliminary voting while the result will be announced on February 8, 2021. The election commission will announce the procedure of final election on March 21, 2021.

The final election will be held on April 11, 2021 for CTA President and members of 17th TPiE. The election commission will announce the name of new elected Sikyong and members of Tibetan parliament on May 14, 2021.