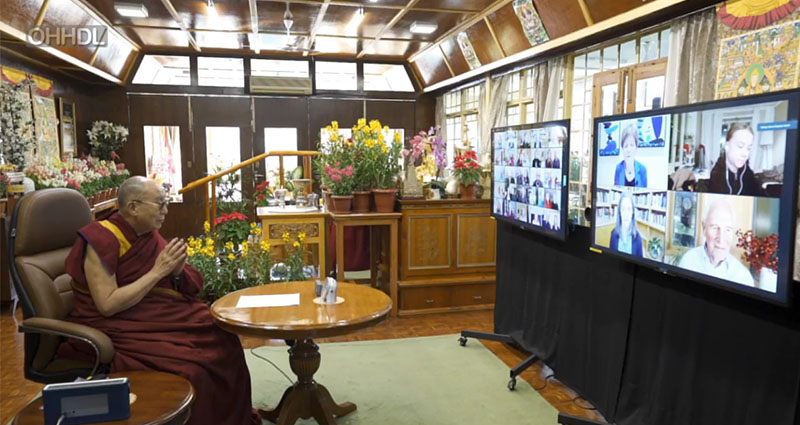 His Holiness the 14th Dalai Lama at a virtual conference with environmental activist Greta Thunberg, and two leading scientists, William Moomaw and Susan Natali on January 10, 2021.

Dharamshala, India—His Holiness the 14th Dalai Lama called for global climate action while attending a virtual conference organized by the Mind and Life Institute on January 10, 2021. He discussed climate changes and environmental issues with environmental activist Greta Thunberg and acclaimed climate researchers from across the globe.

His Holiness the 14th Dalai Lama, who highlighted the pressing need for global climate action in his recent book Our Only Home: A Climate Appeal to the World, applauded activist Thunberg and the younger generation for their genuine sense of concern for humanity’s future during the virtual conference on Crisis of Climate Feedback Loops organized by Mind and Life Institute. “When I heard of this young girl from Sweden, I really felt that there is really hope from our younger generation who are really thinking of the environment. “It is really encouraging from younger members of humanity, showing genuine sense of concern for our future. It is a very hopeful sign,” the Tibetan spiritual leader said while addressing a question about the letter he wrote to Ms Thunberg earlier this year.

The young environmental activist thanked His Holiness for being a loud advocate for environmental protection and, throughout the conversation, emphasized the need for clarity in public messages about the perils of climate change and global warming as she criticized politicians and the media for their own ignorance about critical processes like tipping points and feedback loops.

His Holiness also made an appeal for humans to move away from a self-centered worldview in his opening remarks by observing the universality of the impact of climate change and how self-preservation now meant caring for all of the human race in the context of climate change.

“In ancient times, we say east, west, north or south and within that different region and different color and different language; these are minor. Now we have to think of humanity, oneness of seven billion human beings,” mentioned the Nobel Peace Prize Laureate reminding everyone about the need to overcome archaic differences in order to tackle the issues of climate change.

The Mind and Life Institute, cofounded by His Holiness three decades ago, organized the conference to not only facilitate a conversation between Ms Thunberg and His Holiness but also to launch a series of short educational films called Climate Emergency: Feedback Loops. Through these, they aim to bring viable solutions for the betterment of all living beings.

The conversation was moderated by Dr Diana Chapman Walsh, former board member at the Institute, and served to educate the general public about the often overlooked phenomenon of feedback loops and how the cyclical process is speeding up global warming.

The discussion also included two brief talks from Dr Susan Natali and Dr William R. Moomaw, both of whom have also been featured in the short films produced by the institute, about how feedback loops are leading to phenomena such as quickened melting of ice in the Arctic and increased wildfires across the globe.

While Dr Natali talked of how the lack of reflective ice is leading to faster melting of permafrost in the Arctic and the Tibetan plateau, Dr Moomaw explained the linkages between deforestation and the increasing carbon content in the atmosphere.

The virtual conference ended with a call to action by all the panelists as they agreed that restoring nature to stop feedback loops from reaching a tipping point by implementing a plethora of solutions like reforesting, changing grazing patterns, protecting wetlands, regulating farming patterns. Also, a greater need of educating the general masses on the importance of the environment and its preservation.