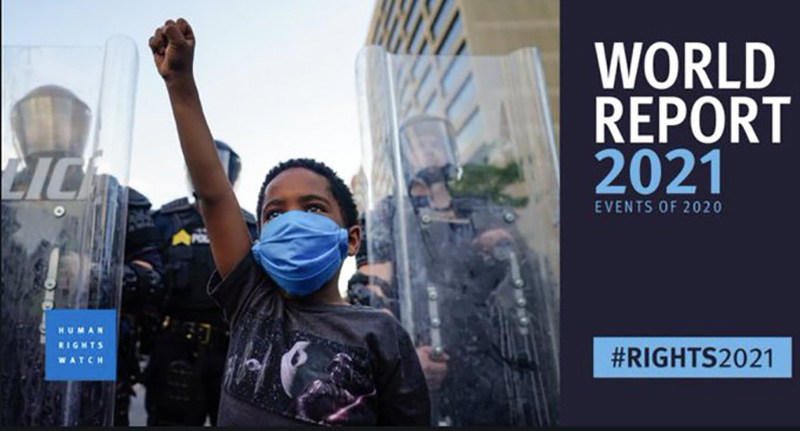 New York, USA – “China had an appalling year for human rights in 2020,” said Human Rights Watch (HRW). Chinese Government’s ‘authoritarianism’ came into limelight during the year 2020, especially after the Coronavirus outbreak in Wuhan. On 13 th January 2021.

Human Rights Watch published their 31 st edition of the World report; highlighting the instances of crackdown on dissent in Hong-Kong, repression of Uyghurs in Xinjiang, Tibetans in Tibet and attempts at silencing Chinese journalists reporting on the Coronavirus outbreak.

HRW Executive Director Kenneth Roth believes that China is in ‘midst of its darkest period for human rights’. He told Reuters Television in Geneva that "China remained the biggest threat to global human rights and that Chinese President Xi Jinping had “embarked on the most intense repression” in the country since the Tiananmen Square crackdown in 1989".

“Putting a dent in the Chinese government's sense of impunity for serious human rights violations is a real priority, we think, for governments and for institutions like the UN," said Sophie Richardson, China director at HRW.

According to the Human Rights report, Chinese authorities in Tibet continue to impose inhuman violations of freedom on Tibetans, restriction of religious freedom, movement and assembly by authorities in Tibetan areas. It also notes how the authorities fail to redress popular concerns about mining and land grabs by local Chinese officials, which often involve unlawful use of force by security forces.

“Authorities’ 13th Five-Year Plan for Tibet (2015-2020), which set ambitious state goals for rural transformation, includes the relocation of several hundred thousand more people. Official claims of ‘poverty alleviation’ prompted fears of further marginalization and dispossession of Tibet’s rural majority,” the report mentioned. The Tibetans fear that what may seem like a social and economic development for the region might have a political agenda hidden behind it - ‘complete Sinicization of the Tibetan Plateau through ethnic cleansing.’

“In May, regulations for the promotion of Nationality Unity Model Areas came into force, representing a new milestone for the coercive assimilationist policies of the current leadership.” It points out that these policies encourage economic migration from other parts of China, eliminate Tibetan medium-instruction in primary schools, increasing surveillance in neighbourhoods, workplaces and homes that eventually prevents public protests.

“At the 7th Forum on Tibet Work in August 2020, Chinese President Xi personally called for increasing political education in schools in Tibet to ensure the loyalty of the next generation, signalling central support for these policies,” the report revealed.

The report speaks about the initial cover-up and suppression of facts related to the outbreak, by the Chinese authorities, following the punishment of people reporting about it. “Authorities initially covered up news about the virus, then adopted harsh quarantine measures in Wuhan and other parts of China. The government has rejected international calls for an independent, unfettered investigations into Chinese authorities’ handling of the outbreak, and surveilled and harassed families of those who died of the virus,” read the HRW report.

“Beijing’s repression—insisting on political loyalty to the Chinese Communist Party—deepened across the country,” the report said. Subsequent to the large-scale protests in Hong Kong in 2019, the Chinese Government imposed a severe ‘National Security Law’ – creating a barrier on the people’s freedom.

In Xinjiang, ethnic minorities continue to be persecuted on the basis of their identity. Uyghur (Turkic Muslims) are either detained or subjected to political indoctrination, mass surveillance and forced labour.

"Protests broke out in Inner Mongolia when the education authorities decided to replace Mongolian with Mandarin Chinese in schools. The report also stated that complete blockade of communication and silencing of journalists, activists and whistle-blowers has made it tough to obtain accurate information.

In conclusion, the 761-page report found that number of governments expressed public concern about China’s human rights violations in 2020, particularly in Hong Kong and Xinjiang, though relatively few took serious action. An unprecedented group of 50 UN human rights experts issued a joint statement, calling on states to act collectively and decisively to ensure China respects human rights and abides by its international obligations.