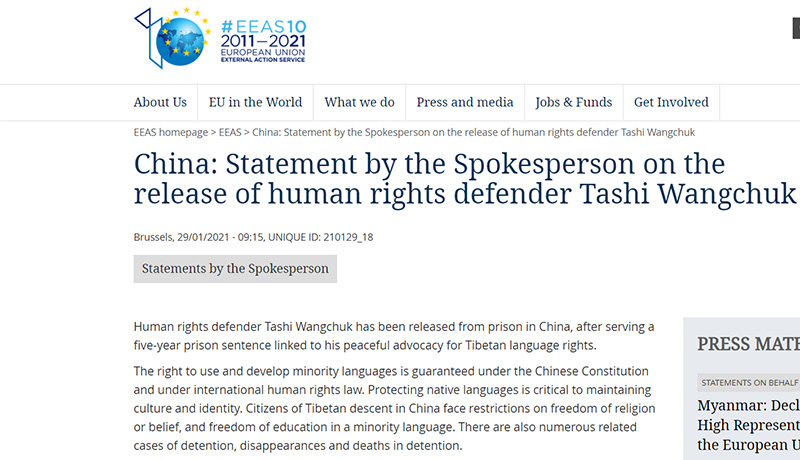 “The EU calls for the immediate and unconditional release of all those currently imprisoned in connection with the exercise of their rights and fundamental freedoms. Those in detention have a right to a fair trial and due process, and to decent treatment, free from torture and ill-treatment while in prison. The European Union will continue to engage with China on human rights issues,” mentioned the official statement released by the EU.

Nabila Massrali, the Spokesperson for Foreign Affairs and Security Policy of the European Union, called upon the Chinese authorities to ensure that Mr Tashi Wangchuk is released unconditionally and able to enjoy all the basic fundamental human rights guaranteed to him by China’s own constitution as well as various international laws and conventions. “The EU also urges the authorities to conduct a thorough investigation into allegations of mistreatment, torture and abuses on Mr Wangchuk while in detention,” added the Spokesperson.

Tashi Wangchuk was arrested in early 2016 for comments he made to a New York Times documentary about the atmosphere in China regarding the protection of minority cultures. Two months after the release of the documentary, he was detained for “inciting separatism” because of his comments in the documentary. The prosecutors cited the same comments in his trial in early 2018, and he was sentenced to 5 years of imprisonment including the two years he had already spent in detention.

“No one wants to live in an environment that’s full of pressure and fear,” he said in the 2015 documentary. He added that the authorities were effectively inducing a ‘systematic slaughter’ of minority and Tibetan culture. According to a report by the San Francisco based Dui Hua Group, between 1998 and 2016, 11,810 people were tried by Chinese courts on charges of separatism or inciting separatism. Only 15 were acquitted. There is a serious need to hold China accountable for the gross injustices the government commits against the minorities, and the time for that is now.

Language is an essential element of any culture, and protecting the language is necessary as it binds the people to the culture. Without language, culture cannot thrive. The Chinese Constitution, as well as the international human rights law, guarantee the right to use and develop minority languages. However, that is far from the ground reality in China, as people face severe restrictions on their fundamental freedoms of religion and belief, with many even facing years of incarceration for trying to protect their cultural and religious identity. Cases of detention, disappearances and even death in detention are, sadly, commonplace in occupied regions under China.