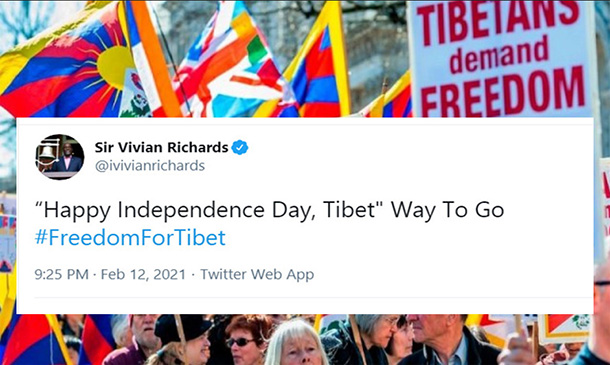 Dharamshala, India – Sir Vivian Richards, the legendary West Indies cricketer, including others, lent their support to the Tibet’s freedom movement on February 13, 2021. His tweet went viral and gained over 73000 likes and 19000 retweets in just 10 hours and the hashtag #FreedomForTibet trended on twitter.

Tibetans cross the world observe 13 February as Tibetan Independence Day, the anniversary of the five-point proclamation issued by the 13th Dalai Lama in 1913. After China’s occupation of Tibet in 1950s, this day assumed added significance, with exiled Tibetans marking the day every year.

Many Tibetans including His Holiness Dalai Lama flee to India after the Chinese government occupied the government of Tibet and Tibetan social structures. Since then China has actively tried to destroy Tibetan culture, language, religion and its people. Despite Beijing’s best effort, the Tibetan struggle for freedom is still alive. On an international stage, many activists, journalists and scholars have been working towards the freedom of Tibet to ensure that Chinese propaganda does not hide the truth from the world that China forcefully annexed Tibet and continues to oppress Tibetans.

Many eminent personalities from around the globe including celebrities and star athletes have advocated for the freedom of Tibet. Most recently, legendary batsman Sir Vivian Richards in his tweet said “Happy Independence Day, Tibet” and used the hashtag Freedom for Tibet. He was greatly appreciated and thanked by netizens for acknowledging the plight of Tibetans.

Other prominent users who used the hashtag #FreedomForTibet included Satyadev Pachauri, Kanpur BJP MP, who said the world is coming together against “expansionist” China. The tweets by the BJP leaders on Tibetan freedom come amid strains in India-China dispute.

Among world-renowned actors, Richard Gere, Golden Globe award-winning actor has been one of the most active supporters of the Tibetan cause. He endorses various charities such as Tibet House US, International Campaign for Tibet, Free Tibet Campaign and the Dalai Lama Foundation.

Other celebrity supporters of the Tibetan cause are American actress Amy Adams and actors Bradley Cooper, Hugh Jackman, and Jeremy Renner. Ben Harper-American singer-songwriter, The Beastie Boys, Sting-English songwriter, Yoko Ono- Japanese multimedia artist and legends like Martin Scorsese and George Lucas, the brain behind Star Wars franchise, have also supported and endorsed the freedom of Tibet in the past.

India and Tibet share a deep cultural and spiritual connection and have years of history. However, despite the connection, rarely has any Indian celebrity, star athlete, or musician voiced their support for the Freedom of Tibet and the Tibetans. The few Indian celebrities that have championed Tibet’s cause include Ranbir Kapoor-Actor, Imtiaz Ali- Director and Baichung Bhutia- Footballer. Bhutia even refused to participate in 2008 Beijing Olympics to stand by the Tibetan people.

Celebrities like those mentioned above among others have helped spread awareness about the Tibet Cause contributing to keeping the Tibetan struggle for freedom alive. More people, including Indian celebrities should stand in support of Tibet as the China’s expansionary policies can hurt the rest of the countries as well.