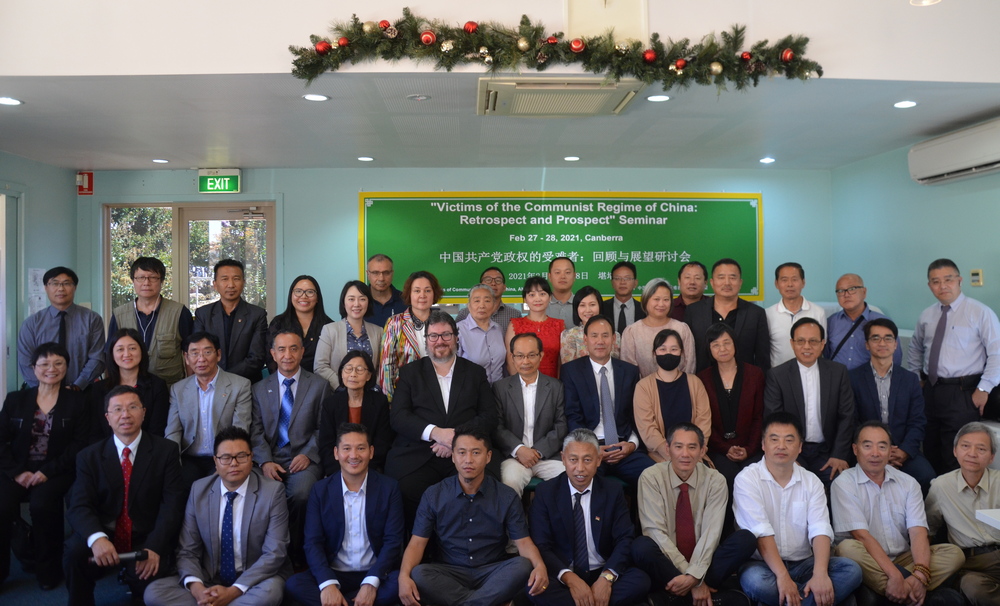 Canberra — Representatives of Australian victims of communism gathered in Canberra on Saturday for a two-day seminar to review the crimes committed by the Chinese Communist Party (CCP) since its establishment, to plan the future campaigns, and agreed to form the Australian and New Zealand Alliance of Victims of Chinese Communist Regime.

The "Victims of Communist Regime of China: Retrospect and Prospect" Seminar was held last Saturday and Sunday (Feb. 27-28) at the Sundown Villas in Canberra, Australia.

About 70 participants from Chinese democracy activists and representatives of Tibetan, Uyghur, Mongolian, Hong Kong, Taiwanese and Falun Gong associations from various states in Australia attended the seminar and invited Australian dignitaries, China experts, and representatives of Vietnamese communist victims' groups to speak at the event.

In addition, Senator Eric Abetz of the Australian Federal Liberal Party and the head of the New Zealand Democracy Platform, Chen Weijian, spoke via video messages.

The main purpose of the meeting is to let the Australian and New Zealand governments and people understand the nature of the Chinese Communist Party, to recognize the threat of the CCP to the free world, to make all communities persecuted by the CCP join hands to resist the global expansion of the regime, to curb its crimes against humanity, to promote the enactment of the US equivalent of the "Global Magnitsky Act" by the Australian Parliament and to encourage other governments to impose similar sanctions against the Chinese Communist officials.

In his opening remarks via video message, Senator Eric stressed that Australia and other countries must not remain silent about the Human Rights abuses committed by the Chinese Communist Party. He also encouraged all peace and freedom lovers to continue their campaign against communism. "This is a timely conference to consider the victims of communism. There are millions of them. We need to be on the side, we need to speak for the price. And that is why our trust in this conference will be one of many voices, ensuring that the evils of communism are forward exposed and that liberty will prevail." he said.

Feng Chongyi, a renowned scholar on China and professor at the University of Technology Sydney, as the chief advisor of the seminar, Lhagpa Tsokho, Representative of the Central Tibetan Administration in Australia, as a Special Guest, as well as leaders and representatives of various groups, spoke successively, recalling their personal and other people's experiences of suffering under the tyranny of the Chinese Communist Party.

Speaking about the newly founded organisation's vision and objectives, Prof Chongyi Feng said "Alliance for Victims of the Chinese Communist Regime will be an advocacy NGO for strengthening the solidarity and alliance of Chinese, Tibetans, Uyghurs Mongolians, Hong Kongers, Taiwanese and other communities who have victimised by the CCP to redress the injustice and assisting the international community, Australians and New Zealand in particular, to have deeper understanding the true nature of the CCP totalitarian regime and the threats by this regime to the values, peace, and security of the free world."

Prof Feng made a presentation on the conference objectives, including 'a timely opportunity to share insiders profound knowledge and rare insiders based on the deep life experience of the Chinese communist rule, a stimulating forum for China experts to address the issues about crimes committed by the CCP regime and a mechanism to explore effective strategies for the global pushback against the CCP tyranny.'

Participants shared their views on the current situation and the goals of the future freedom and democracy movement, with an aim to provide assistance for the public and the governments of Australia and New Zealand to have a deeper understanding of the true evil nature of the CCP totalitarian regime and the threats posed by this regime to the peace and security of the free world.

"Today, we are very fortunate to live in the beautiful lands of Australia and New Zealand and enjoy human rights safeguarded by the system of constitutional democracy, but our compatriots living under the CCP tyranny continue to endure unbearable abuses and humiliation," the organiser said in a statement.

"Millions upon millions of innocent people lost their lives or suffered political and religious persecution under the brutal CCP rule. The regime designated 20 million people as “dictatorship targets” with class labels of landlords, rich peasants, counter-revolutionaries, and bad elements, subjecting them and their families to endless inhumane abuses for decades", the press statement reads.

"We all share a common purpose to meet here today for the next two days. We are meeting at a time when the brutality of the Chinese communist regime has increased manyfold. We have all suffered and continue to suffer, directly or indirectly, under the authoritarian regime of Communist China," Representative Tsokho further added.

'If the IOC chose Beijing to host the Winter Olympics in 2022 just as it did in 2008, will make the people of Taiwan even more frightened of the possibility of a military invasion. So, I strongly support the campaign to move the Olympics to another city. So that Beijing cannot enjoy the big boost in global authority and respect that it will gain," Prof Clive Hamilton said while addressing the meeting.

Prof Hamilton continued by saying: "the IOC says it is committed to building a better world through sport. The IOC strategic roadmap for the future includes make cities and human settlements inclusive, safe, resilient, and sustainable and promote peaceful and inclusive societies for sustainable development. Can the IOC tell us how Beijing will be made more inclusive, safe, and peaceful as a result of hosting the Olympics?"

"Can the IOC tell us whether the dissidents, lawyers, citizen journalists, and political prisoners now incarcerated in China to change prison and how they will feel safer and more peaceful? The CCP dictatorship is much more powerful today than it was in 2008, and the flames of nationalism burn hotter, and threatening war beginning with Taiwan."

"Yet by going to the Winter Olympics in Beijing, they're teaching things grip on power, will be strengthened and the CCP will be emboldened even more to spread its malign influence around the world. The threat to the global peace of Chinese nationalism will be even greater. So, for the sake of peace and freedom, and respect for the victims of the CCP, the Winter Olympics should not be held in Beijing," he further added.

Speaking as a guest speaker, Australian lawmaker George Christensen strongly denounced the heads of state and government who have adopted a strategy of "quiet diplomacy" in dealing with human rights violations by the CCP  as helping the Communist regime to cover up its crimes against its people. He praised the participants for their conviction and courage to speak out, and encouraged them to continue to speak out loudly on topics that world leaders are afraid to mention to the regime, to show the world the hidden crimes against humanity, and to make them feel the brutality and oppression of communism, and in doing so to gain the attention of governments around the world, including Australia.

"They want to deny the world, the full picture of the hideous atrocities that they're perpetrating against their own people. Because of the CCP, perception is everything. If they are publicly shamed, embarrassed, and chastised on an international scale, it undermines the regime in the eyes of the people. It seeks to control the eyes of the world around it. Therefore that is why this conference is so important. That is why your efforts to form a formal 'Alliance for Victims of the Chinese Communist Regime' are just so important. I'm so proud of each and every one of you gathered here. Doing this takes so much character, so much courage, and so much conviction," he added while addressing the gathering in the Capital.

Kelsang Gyaltsen Bawa, Chinese Liaison Officer, Office of Tibet, Canberra, who has recently been appointed as the new Representative for Office of Tibet, Taipei, said that the conference was successfully concluded today after extensive efforts and preparations. He also hopes that member communities will continue this cooperation on the critical issues raised during the meeting.

"Tibet with its long history was an independent country before the military invasion and illegal occupation by Communist China in 1949. On 11 November 1950, the Tibetan Government protested to the U.N. against Communist China's aggression and subsequently appealed to the UN in 1959, 1961, and 1965 respectively," said Kalsang Yonten Tipnak, President of All Australian Tibetan Community.

"Today, Communist China has divided Tibet into 13 administrative areas —a so-called Tibet Autonomous Region', 10 'Autonomous' Prefectures, and two' Autonomous' Counties. All the Tibetan autonomous prefectures and counties have been incorporated into and are administered under the Chinese provinces of Qinghai, Sichuan, Yunnan, and Gansu," Yonten added.

Please click the link to view the Seminar photo gallery.