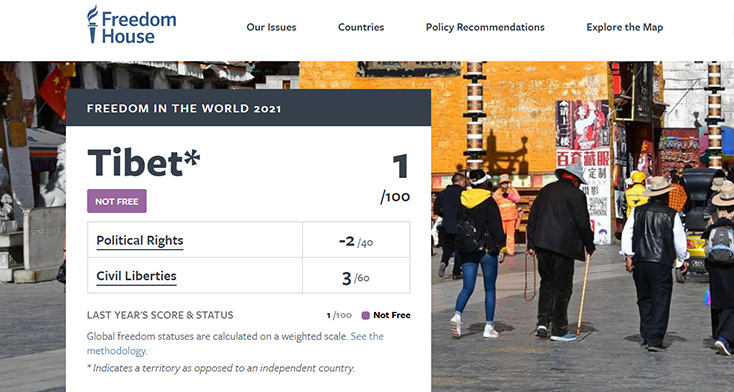 Freedom House lists Tibet as the number one least free country in the world in 2021. Photo: Freedom House

Washington, D.C. – Tibet has been listed among the least free countries in the world for the fifth year in a row with only Syria considered to be less free, according to a new report published by Freedom House, an independent watchdog organization dedicated to the expansion of freedom around the world.

The Freedom in the World report which is released every year assesses levels of civil liberties and political rights across the world. Countries are given a rating out of one hundred with those scoring zero considered as least free. They are then categorised as ‘Free’, ‘Partly Free’, or ‘Not Free’.

Tibet had been given the “worst” rating for years, with an aggregate score of one, putting it top among the least-free countries since 2015. The ranking for 2021 represents a fundamental shift as Tibet is now tied with Syria as the least free country in the world in terms of freedom. Tibet scored only one out of 100 in the global freedom rankings, which has been the case for the last six years, according to the 2021 Freedom in the World report.

Tibet score of 1/100, which was lower than all other countries in the world except Syria, which received a score of 0/100. North Korea (3/100) and Saudi Arabia (7/100) were both in the bottom ten, but they were also considered more free and fair than Tibet.

The report says "Tibet is ruled by the Chinese Communist Party (CCP) government based in Beijing, with local decision-making power concentrated in the hands of Chinese party officials. Residents of both Chinese and Tibetan ethnicity are denied fundamental rights, but the authorities are especially rigorous in suppressing any signs of dissent among Tibetans, including manifestations of uniquely Tibetan religious belief and cultural identity. State policies encourage migration from other parts of China, reducing the ethnic Tibetan share of the population."

President of the Central Tibetan Administration Dr Lobsang Sangay strongly praised Freedom House for its 2021 report and reacted by saying unequivocally that “Tibet received a score of one in the last six years in terms of freedom. Six years in a row shows the gravity of the situation in Tibet. While Syria’s score has improved from zero to one, Tibet’s human rights state continued to be in a grim situation as the Chinese government persists in committing grave violations.”

The report noted that "the numerical ratings and status listed above do not reflect conditions in Hong Kong or Tibet, which are examined in separate reports. Freedom in the World country reports assess the level of political rights and civil liberties in a given geographical area, regardless of whether they are affected by the state, non-state actors, or foreign powers. Disputed territories are sometimes assessed separately if they meet certain criteria, including boundaries that are sufficiently stable to allow year-on-year comparisons".

"The malign influence of the regime in China, the world’s most populous dictatorship, was especially profound in 2020. Beijing ramped up its global disinformation and censorship campaign to counter the fallout from its cover-up of the initial coronavirus outbreak, which severely hampered a rapid global response in the pandemic’s early days," it stated.

"Its efforts also featured increased meddling in the domestic political discourse of foreign democracies, transnational extensions of rights abuses common in mainland China, and the demolition of Hong Kong’s liberties and legal autonomy. Meanwhile, the Chinese regime has gained clout in multilateral institutions such as the UN Human Rights Council, which the United States abandoned in 2018, as Beijing pushed a vision of so-called non-interference that allows abuses of democratic principles and human rights standards to go unpunished while the formation of autocratic alliances is promoted," the report further said.

The organisation’s annual report, gives countries and some territories a rating out of one hundred, based on a number of categories, such as whether they have a functioning government, whether they hold free and fair elections and whether people can express their views freely and without fear of punishment.

"In a variety of environments, flickers of hope were extinguished, contributing to a new global status quo in which acts of repression went unpunished and democracy’s advocates were increasingly isolated," the report said.

The CCP, "faced with the danger that its authoritarian system would be blamed for covering up and thus exacerbating the COVID-19 pandemic, worked hard to convert the risk into an opportunity to exert influence. It provided medical supplies to countries that were hit hard by the virus, but it often portrayed sales as donations and orchestrated propaganda events with economically dependent recipient governments."

"Beijing sometimes sought to shift blame to the very countries it claimed to be helping, as when Chinese state media suggested that the coronavirus had actually originated in Italy. Throughout the year, the CCP touted its own authoritarian methods for controlling the contagion, comparing them favorably with democracies like the United States while studiously ignoring the countries that succeeded without resorting to major abuses, most notably Taiwan," the watchdog said, adding: "This type of spin has the potential to convince many people that China’s censorship and repression are a recipe for effective governance rather than blunt tools for entrenching political power."

"Beyond the pandemic, Beijing’s export of antidemocratic tactics, financial coercion, and physical intimidation have led to an erosion of democratic institutions and human rights protections in numerous countries. The campaign has been supplemented by the regime’s moves to promote its agenda at the United Nations, in diplomatic channels, and through worldwide propaganda that aims to systematically alter global norms," it further added.

It said that "other authoritarian states have joined China in these efforts, even as key democracies abandoned allies and their own values in foreign policy matters. As a result, the mechanisms that democracies have long used to hold governments accountable for violations of human rights standards and international law are being weakened and subverted, and even the world’s most egregious violations, such as the large-scale forced sterilization of Uighur women, are not met with a well-coordinated response or punishment."

"In this climate of impunity, the CCP has run roughshod over Hong Kong’s democratic institutions and international legal agreements. The territory has suffered a massive decline in freedom since 2013, with an especially steep drop since mass pro-democracy demonstrations were suppressed in 2019 and Beijing tightened its grip in 2020," freedom watchdog said.