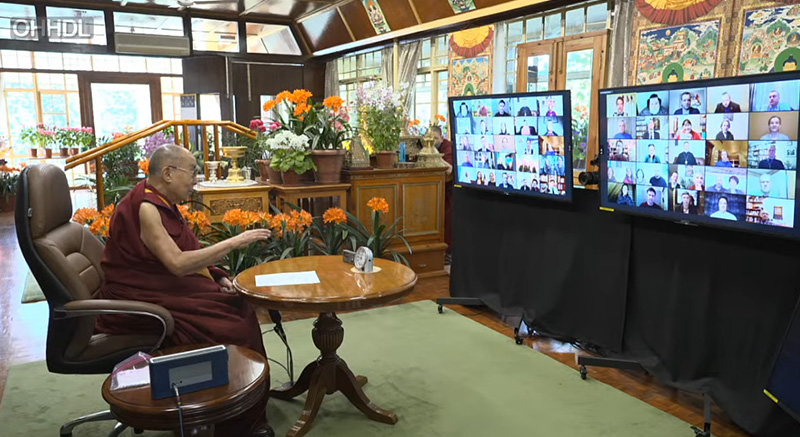 His Holiness the Dalai Lama while speaking on Morals and Ethics, from his residence in Dharamsala, HP, India on April 2, 2021

Dharamshala, India — “We should know which emotions destroy our peace of mind, that is anger, selfishness, and fear. Basic for peace of mind is compassion and altruism. Thinking more for well being of others, you will get more inner peace and strength", said His Holiness the Dalai Lama while speaking on Morals and Ethics to individuals and Parliament members from the Baltic States online from his residence in Dharamshala, HP, India on April 2, 2021.

This online teaching organised by a coalition of individuals and organisations from the Baltic States. Janis Martins Skuja, the founder of Latvia for Tibet, greeted His Holiness the Dalai Lama and introduced the speakers of the meeting.

“According to some different religious traditions, ethic is very much related with religious faith, but according to Indian tradition, secular, not necessarily related with religious belief. Now here we are talking about humanity, we the seven billion human beings, we all are same, we have to live together on this planet. In the past, we involved too much violence and war, lots of money and time spent on making the weapon, which is unfortunate. We human beings basically are social animals, now some scientists say, social animals dependent on the group by birth, they have a sense of community and group, we human beings also same, that is basic nature. We have a sense of community and friendship from childhood, sometimes our sense of community is becoming less and then small group, fight and kill each other by differentiating we and they, that thinking is very uncivilized thinking,” said His Holiness the Dalai Lama while addressing the audience.

“We are social animals, particularly in Today’s world, entire seven billion human beings, their future depends on each other, no longer strong concept of we and they, we have to live together, helping each other. Ethics is talking about the sense of concern of well being of all our human brothers and sisters, that is the basis of ethics, we are not talking about our next life. We as human beings need a sense of brotherhood and sisterhood, we should release we have to live together on this planet happily, friendly and compassionately’’, Tibetan spiritual leader continued.

Andrisu Navickas, a member of parliament from Lithuania, asked what is the biggest lesson and gift of the pandemic?

His Holiness the Dalai Lama answered by saying: this pandemic making a number of people suffer, I am one of the human beings when my brothers and sisters are suffering because of this pandemic, I feel much concern and number of doctors and nurses really dedicated their work to over the pandemic, I really appreciate and admire them. As a Buddhist monk, in my daily, I pray for patients, as a Buddhist monk, I recite the mantra of the goddess Tara(Green Tara Mantra: Om Tare Tuttare Ture Soha), many Buddhist brothers and sisters, you can recite it, this is very helpful for this pandemic.

After that, one member asked His Holiness the Dalai Lama, how to inspire more people in society for lifelong learning and self-development?

“We as a Human being, we have a special brain, so education is very important, our emotions are the same as animals, all want happiness. Education is the key factor and in education, we should talk more about basic values, in the past, talked about our nation and their nation, that thinking is outdated. Now we must think we as human beings and need to live together, through education, we can develop a sense of oneness of seven being a human being. Modern education-oriented from material value, over three thousand years, India has traditions on non-violent, compassion, these two things should include in modern education subjects. Now more and more scientists thinking about mental health and a peaceful mind, physical health is very much related to mental health, peace of mind automatically carries peace life. So, in order to transfer our mind for a peaceful mind, education is very important,” the Dalai Lama answered.

Janis Martins Skuja, the founder of Latvia for Tibet asked His Holiness the Dalai Lama, what is the relation between physical and mental wellness and how to attain balance of all?

“ There is something that affects our brain, that we call mind, a peaceful mind is very important, we should know which emotions destroy our peace of mind, that is anger, selfish and fear. Basic peace of mind is compassion and altruism. Thinking more for well being of others, you will get more inner peace and strength”, the Nobel laureate answered.