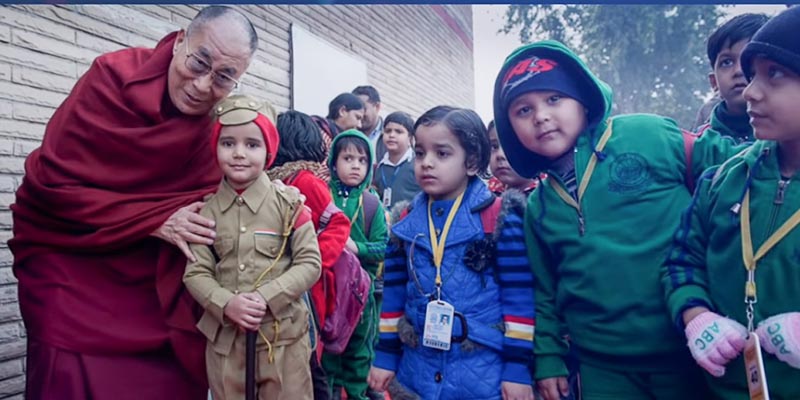 His Holiness the Dalai Lama with a group of Children. Photo: screenshot from video of Finding Peace of Mind

Dharamshala, India — “This marvellous human brain if not well balanced with warm-heartedness, but combined with anger and jealousy, then, instead of bringing happiness and peace, we really become the creator of problems,” stated His Holiness the Dalai Lama of Tibet.

“War I think only exists among humanity, it’s quite a pity. Now scientists also say constant anger, hatred is actually eating our immune system. Anger is very much related to a self-centred attitude. People who have an altruistic attitude are much happier “ noted His Holiness while sharing his views with the group of young individuals.

“Then fear, anxiety creates anger. I feel education should include our inner peace, not through prayer but through understanding which emotions create violence, anger, jealousy, anxiety, and fear. So, these ultimately related to being self-centred,” the Nobel laureate stated.

“Just praying to God is not sufficient. We must have the knowledge, when anger comes into the picture, we must have the intelligence to reduce the intensity of anger. Karuna, if we increase compassion, then anger will automatically reduce. Today’s reality is that the entire humanity is one community, so instead of fighting we should develop universal love,” said, the Tibetan spiritual leader.

His Holiness the Dalai Lama believes the aim of education is to create a peaceful society, he supports various educational endeavours around the world. “Along with physical hygiene, we need to teach children to cultivate emotional hygiene so they can learn how to tackle their destructive emotions and achieve peace of mind,” His Holiness the 14th Dalai lama concluded.