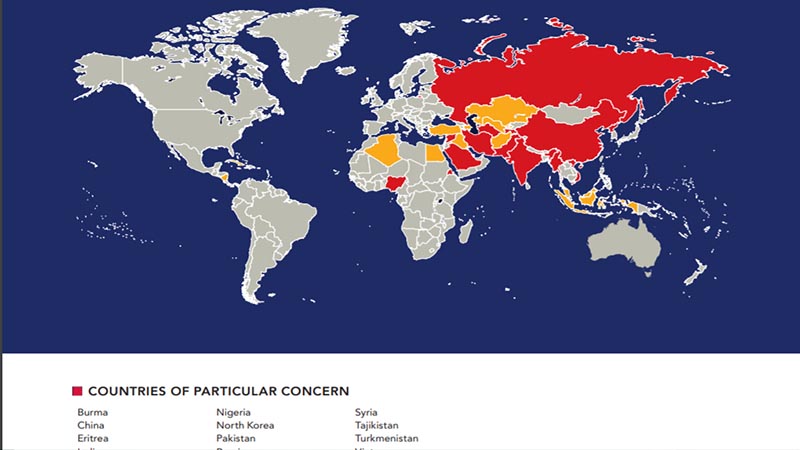 Washington, DC — The United States Commission on International Religious Freedom released its annual report on April 21, 2021. “In 2020, religious freedom conditions in China deteriorated. The government intensified its “sinicization of religion” policy, particularly targeting religions perceived to have foreign connections, such as Christianity, Islam, and Tibetan Buddhism,” the commission stated.

The US religious freedom commission has listed China as one of the 'countries of particular concern and said “The authorities also continued their unprecedented use of advanced surveillance technologies to monitor and track religious minorities, and the Measures on Managing Religious Groups became effective in February, further constricting the space in which religious groups can operate” .

“The Chinese government continued its pervasive control and suppression of Tibetan Buddhism. In August, at the Seventh Tibet Work Forum, Chinese Communist Party (CCP) General Secretary Xi Jinping emphasized the importance of sinicizing Tibetan Buddhism to make it compatible with Chinese socialism and mobilizing Tibetans to “fight against separatism.”

“Subsequently, local authorities organized seminars at Tibetan Buddhist monasteries to indoctrinate monks and nuns on these policies. They placed tight restrictions on monasteries and temples—including the Yachen Gar Buddhist center in Sichuan Province—barring worshippers from entering these sites. Authorities broadly banned Tibetans, including students and government workers, from participating in traditional religious gatherings, and they detained and punished Tibetans for listening to the Dalai Lama’s teachings or possessing his portrait,” the report mentioned.

RECOMMENDATIONS TO THE U.S. GOVERNMENT

1.Redesignate China as a “country of particular concern,” or CPC, for engaging in systematic, ongoing, and egregious violations of religious freedom, as defined by the International Religious Freedom Act (IRFA);

3. Urge like-minded countries to independently investigate and formally determine whether the abuses in Xinjiang meet the definitions of genocide and/ or crimes against humanity under international law, and work together to take measures to hold China accountable;

4. Publicly express concerns about Beijing hosting the 2022 Winter Olympic Games and state that U.S. government officials will not attend the games if the Chinese government’s crackdown on religious freedom continues; and