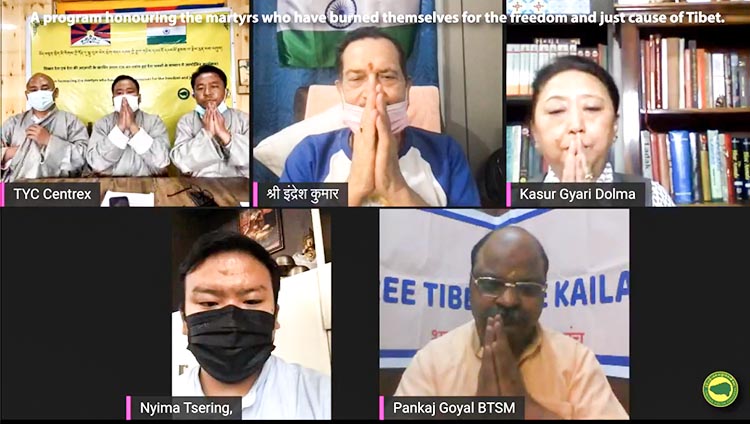 Dharamshala, India — On Martyrs Day, Tibetans and Indians pay homage to the 157 Tibetan martyrs who self-immolated to protest against China's repression in Tibet.

On April 29, 2021, Martyrs Day, Tibetan Youth Congress(TYC) along with Bharat Tibet Sahyog Mach and Voice for the Voiceless held a virtual program on "Tribute to Tibetan Martyrs" to honor and pay homage to Tibetan heroes and martyrs who self-immolated to protest against China's repression in Tibet.

On April 29, the date of the demise of the self-immolator Pawo Thupten Ngodup, the first self-immolator by a Tibetan in the Tibetan freedom struggle. The NGOs launched a "Tribute to Tibetan Martyrs" project to honor and pay homage to the 157 known individual Tibetans inside Tibet who have undertaken the ultimate sacrifice of self-immolation in a befitting and somber manner to protest against the Chinese repressive, oppressive and suppressive systematic rule in Tibet.

“ This project aims to honor and pay the deepest homage to each Tibetan who has undertaken the supreme sacrifice of self-immolation for the cause of a country, Tibet. To remember and raise awareness about the aspirations and profile of these martyrs in India and the world. To bring the problems of Tibet and the circumstances leading to the act of self-immolation to the attention of the international community. To be a catalyst for urgent discussion and action by international powers through programs organized under this project, ” said Gonpo Dhundup, the president of TYC.

“ We will be creating a 108 joint working committee in India, comprising of local eminent and like-minded volunteers in various villages, settlements, districts, local levels in the name of randomly selected 108 Martyrs. Where each chapter/ local committee will hold programs on the date of self-immolation of the martyr assigned to them, ” he added.

“ Similarly, such chapters/ committees shall be created in other countries, each dedicated to other martyrs who have made the same supreme sacrifice of self-immolation. The chapters will organize different activities to encourage reflections on the deep sense of helplessness felt by the martyrs under the harsh and tyrannical rule of the CCP over Tibet; to highlight the prevailing conditions in Tibet globally, ” the TYC president concluded.

Tibetan Youth Congress is the largest Tibetan NGO based in Dharamshala, working for the restoration of freedom and complete Independence of Tibet. Bharat Tibbat Sahyog Manch, an organization with more than 250 chapters in the Indian region has remained one of the strongest supporters for the Tibetan freedom movement since its inception on 5th May 1999. Voice for the Voiceless is a Tibetan People's Movement based in Delhi.