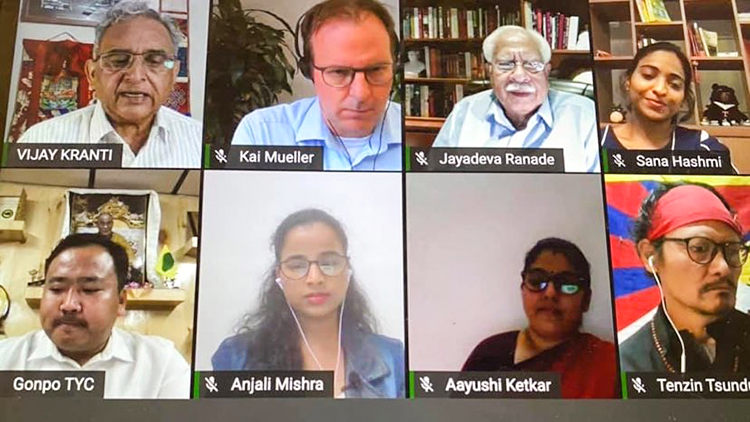 New Delhi, India — 'China is rapidly creating a situation where Tibet will be there, but it will be without the Tibetan people,' China-Tibet experts said while discussing China's 70 years of colonial rule in Tibet at an international webinar on 23 May 2021.

It’s a challenge to the wisdom and conscience of the civilized world that China is showing the arrogance of ‘celebrating’ 70 years of its colonialism in Tibet. As a mark of this ‘celebration’ Beijing has issued a ‘White Paper’ on Tibet which is not only a bunch of white lies but is also an attempt to whitewash all its colonial crimes like genocide, cultural annihilation, loot of natural resources, and blatant denial of human rights to the Tibetan people.

There is a serious danger of the Tibetan people disappearing altogether as distinct people because the Chinese Communist Party in Tibet is aiming at reprogramming Tibetan people’s minds and hearts through the implementation of its colonial policies in Tibet. China is fast creating a situation where Tibet will be there, but it will be without the Tibetan people. These were some of the common concerns, expressed by a group of international ranking experts on China and Tibet in a webinar titled “70 Years of Chinese Colonial Rule in Tibet”.

On 23rd May 1951 China claims to have signed what it calls as the “17-Point Agreement” with the Tibetan government to merge Tibet into China. The panelists discussed various aspects of the history and current situation of Tibet under the China’s colonial rule.

Mr Kai Mueller, in his keynote address, expressed concern that a serious term like ‘colonialism’ has been replaced in the international discourse by terms like authoritarianism, totalitarianism or surveillancism which do not go beyond measuring or questioning state power. “This has given China full chance to distract world’s focus from the real issues arising out of colonialism in Tibet,” he said.

“China’s rule over Tibet since 1951 has all the characteristics of colonialism in the real sense of the word. This is evident not only from the manner in which the Chinese authority was established and maintained in Tibet, it is also clear from the way the Chinese authorities decide on and implement economic and other development policies and exploit natural resources. But most revealing is the attitude of Chinese authorities and of the Tibetan people whose perceptions of each other are typical of the colonial power and the colonized people” said Mueller.

“The world, therefore, needs to understand the DNA of the Communist regime of China and wake up to the real Chinese danger before it is too late,” he warned.

“The policies of Sinification of Tibet are aimed at reforming the thoughts and minds of Tibetans so that Tibetans no longer remain as Tibetans – not speaking their language, nor practicing their beliefs and not living their lives. The world should understand that the Chinese Communist Party (CCP) aims at nothing less than reprogramming Tibetan people’s minds and hearts. The world community needs to understand the DNA of CCP’s rule in Tibet and recognize this cultural genocide,” said Mueller.

He warned that there is a serious danger of the Tibetan people disappearing altogether as distinct people. “That means a Tibet without the Tibetans”, he said.

In his presentation Mr Jayadeva Ranade, a well know expert on China and a former Additional Secretary with the Cabinet Secretariat of Government of India, analyzed the Chinese ‘White Paper’ which was issued on the eve of the 70th anniversary of China’s occupation of Tibet. He pointed that Beijing authorities are still toying with historic facts and going to ridiculous limits of claiming sovereignty over Tibet during past centuries which never happened in the history.

Referring to China’s claims about the development of Tibet he said that there is no doubt that Tibet has been developed over past decades by China. “But the Chinese masters of Tibet hide this fact that all this development in Tibet is aimed at increasing China’s military control over Tibet and exploiting the mineral wealth of Tibet,” he said.

Mr Ranade said that China’s ongoing attempts to control the Tibetan religious institutions, seducing the monks and nuns with money packets, offering them official positions, and appointing communist cadres in the monasteries only expose the fact that there is serious resistance among the religious community against Chinese rule and Beijing has failed to win their hearts.

Dr Ms. Sana Hasmhi, an Indian scholar on China, currently stationed in Taiwan said that Beijing’s claims about what it calls ‘democratic reforms’ look pale against the robust democratic system the Tibetan refugee community has developed over the years under the leadership of Dalai Lama. Rubbishing China’s claims about bringing development in Tibet she said that all this development is aimed at settling millions of Han Chinese in Tibet while the local Tibetans feel strong discrimination in matters of jobs and salaries.

About China’s latest “White Paper” she said it is nothing but Chinese Propaganda. She lampooned the Chinese government for recently releasing manipulated films about the celebration of Eid by Xinjiang Uyghur Muslims and said that the Beijing leaders don’t even demonstrate such artificial sympathy for religion in Tibet. They even go to the extent of banning celebration of Tibetan New-Year and make Tibetan people feel like prisoners in their own country. Expressing relief on the USA and European Union becoming more supportive of Tibetan people she warned the world community to realize that China’s activities in Tibet hold serious dangers for other countries too.

Mr Tenzin Tsundu, an internationally acclaimed Tibetan writer, poet, and champion of complete independence of Tibet from China’s colonial rule, regretted that there has been no meaningful support for Tibetan people from the world community. “But despite this international indifference the Tibetan people have not given up and have successfully kept their spirit of freedom alive”, he said.

Talking about China’s claims in the latest White-Paper on Tibet that it has been a ‘part of China’ since centuries, Tsundue said it was ridiculous for the rulers of China to make such claims which itself came into existence only in 1912 after having lived as slave to foreign rules of the Manchurians and Mongols.

Referring to the recent US law on Tibet viz. “Tibet Policy and Support Act-2020,” Tsundu said that this US support for the people of Tibet was less due to the Americans’ love for Tibet and more because now they feel threatened by the Chinese government.

Mr Tsundue said that China has reached a stage today when it is threatening every country around the world. “It is time for the world to learn from the Tibetan people who have withstood China’s bullying and oppression for seven decades and still have not given up. It is the Chinese government who is feeling afraid of the Tibetan people,” he said.

Mr. Gonpo Dhundup, President of Tibetan Youth Congress (TYC), the largest socio-political organization of the Tibetan Diaspora and champion of total independence for whole of Tibet, advised the world governments, especially the governments of South Asian countries to join hands and fight the Chinese threat together. “By occupying Tibet and reaching borders of South Asian countries China has become a threat to the national security of these countries,” he said.

He said that there have been many mass uprisings of Tibetan people against the Chinese colonial rule and the participants of all these uprisings were those young Tibetans who are 2nd or 3rd generation after Tibet lost its freedom. Self-immolation by 157 Tibetans against China shows that the resistance against China is very strong in the hearts of the Tibetan people.

Vijay Kranti, a senior journalist, Tibetologist, and Chairman CHASE moderated the discussion. Commenting on the latest ‘White-Paper’ of the Chinese government which boasts of ‘Peaceful Liberation of Tibet’ he said that this white-paper is full of white lies and is actually an act of white wash over the inhuman acts and excesses, committed by the communist colonial master of Tibet over their subjects.

“The choice of subjects and claims made on each subject in this White-Paper only exposes the guilty conscience of China’s rulers of Tibet. This paper is Beijing’s attempt to interpret and present all its colonial sins against the people of Tibet an ‘act of favour’ to the people of Tibet over past seven decades,” he said.

Professor Aayushi Ketkar, a scholar of international relations and security matters, in her vote of thanks said that today is the most opportune moment to raise the issue of Tibet because the expansionist and colonial face of China is finally getting exposed and the world is facing a common onslaught of Covid-19 from China. “Tibet is not just an issue of a country being colonized. It is a global issue of environmental destruction, climate change, denial of human rights, human genocide, cultural genocide and threat to world peace and rule of law,” she said.