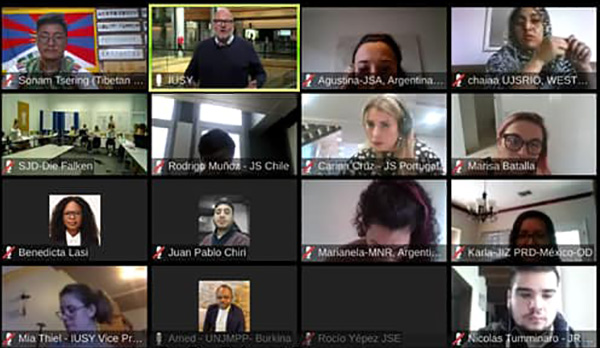 The resolution demands that China be held accountable, as well as free media, the release of political prisoners, environmental concerns, and a positive response to the demand for self-immolation and other current critical situations in Tibet, including the Chinese Communist regime's continued oppressive and aggressive policies in Tibet.

The International Union of Socialist Youth convened a virtual world congress on June 18 and 19, 2021, with over 160 organisations attending and presenting resolutions. Tibetan Youth Congress(TYC) General Secretary Sonam Tsering and TYC English Researcher Tenzin Norzom presented Tibet’s Resolution and highlighted the current urgent situation in Tibet. Each member is given one minute to discuss the resolution.

“We discussed the current critical situations in Tibet, including the Chinese communist regime's aggressive policies in Tibet and the deteriorating environment, and demanded that the Chinese government respond positively to the 157 self-immolation call, as well as allowing an independent international youth group into Tibet to investigate the ground reality,” said Sonam Tsering, TYC’s general secretary to TPI.

With China's hostility toward Tibet and the rest of the world growing by the day, the IUSY unanimously passed the "Resolution on Tibet," proposed by the Tibet Youth Congress (TYC), with 50 votes in favour.

TYC’s resolution on the current critical situation in Tibet as following:

1. Urge the international community to make China accountable for the spread of the global pandemic and causing chaos and misery.

2. Demand the Chinese government to positively respond to the demand of the self-immolation who have called for the return of His Holiness Dalai Lama to Tibet and freedom in Tibet.

3. Demand the Chinese government to free all political prisoners, including the 11th Panchen lama unconditionally.

4. Demand China to allow the world media and an independent international youth group into Tibet to find out the ground reality.

5. Demand to stop nuclear testing, excessive mining, and damming of rivers on the Tibetan plateau, which impacts millions of people in Asia.