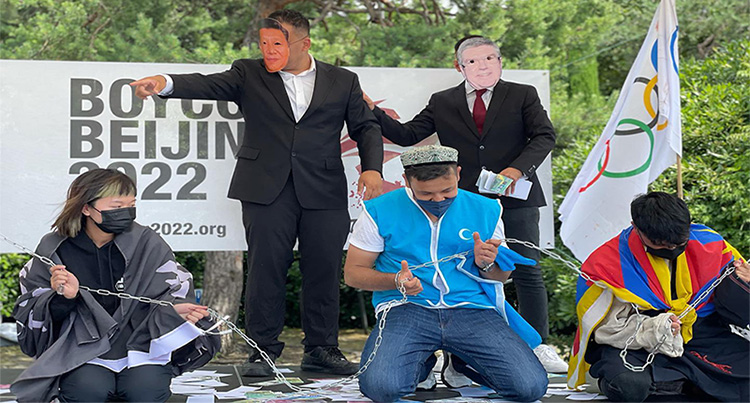 From 4 to 20 February 2022, the 2022 Winter Olympics, also known as Beijing Olympics 2022, will be held in China, where one of the world's worst violations of human rights, freedom, and democracy has been taking place for decades.

To mark the occasion, activists from Taiwan, Tibet, East Turkestan, China, Hong Kong, and Southern Mongolia and their allies launched a global day of action on 23 June 2021 demanding "No Beijing 2022" and calling on the IOC to cancel the 2022 Winter Olympics in China and move them to another location to secure athletes' rights and freedoms. Thousands of people from at least 50 locations around the world took part in the global demonstrations.

The demands of the peaceful demonstrators are as follows:

With these heinous crimes against humanity, China defies the core values of friendship, respect, peace, and equality in the Olympics and does not deserve the right to host such a prestigious event.

Thus a mass campaign and protest namely #NoBeijing2022 is being held around the globe as well as through social media, including Facebook lives and toolkits. The demand is to get the International Olympic Community (IOC) to move the Winter Olympics 2022 to another location, but IOC has failed to comply with the demand despite having clear evidence of Human Rights violation and political bullying by CCP. Thus, the protestors now call for the sponsors and Governments to say #NoBeijing2022.