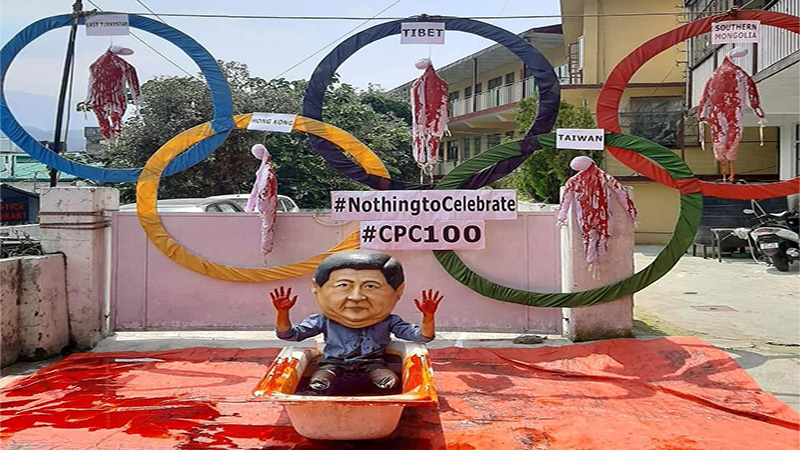 Dharamshala, India –The Chinese Communist Party celebrates its 100th anniversary on July 1, and massive protests are countering the celebration. Activists and supporters of a free Tibet believe that there is “nothing to celebrate”. This is the result of the growing repression of human rights that has occurred in China under President Xi Jinping.

The protest took place in McLeodganj, Dharamshala, India, while there were also protests in Toronto, Canada. Protesters in India opposed the celebration and expressed their frustration through huge hoardings and placards marked with the words "A Century of Oppression and Torture". They provided onlookers with visuals of the Chinese President's hands covered in red paint; a reference to the torture, bloodshed and lives suffered under his brutal regime.

They further came up with the Olympic slogan, referring to the 2022 Winter Olympics planned to be held in Beijing. This decision caused international disappointment as they agreed to participate in a major sporting event in a country that has committed serious human rights violations behind closed doors. Protesters argue that this will validate the actions being taken by China and that the event will give the country the opportunity to hide its assaults through a veil of glamour.

In Toronto, Canada, over 500 members of the Tibetan, Uyghur, Hong Kong, Vietnamese, and pro-democracy Chinese communists rallied in broad daylight to protest 100 Years of the Chinese Communist Party, and referred to it as ‘100 years of oppression’. The event was organized by 20 civil organizations from 6 communities in Canada.

"Behind all the high-tech developments in China, is the dark side of human repression. And we also see repression; absolute control over all students who are either made to disappear or declared insane. The Chinese Communist Party also poses a major threat to global democracies through its infiltration, manipulation, and hostage diplomacy," said Gloria, the first speaker at the rally.

“It is time for Canada and also the world to finally recognize the true nature of the authoritarian regime of the Chinese Communist Party. Today, we stand in solidarity to show our support to the oppressed people in China as well as around the world. We are also here to urge our Canadian government to show leadership by taking a strong stand towards the CCP,” she added.

“We gather here today to speak up against the oppressions committed by the CCP against its people, and more importantly, to immortalize the spirits of the victims of these oppressions. As a student-based group, we recognize the importance of accessible education and academic freedom, both of which have been deprived by the CCP to its citizens,” stated the representative for the Hong Kong Canadian Community.

“As further revelations of the atrocities of residential schools are being uncovered throughout Canada, it is impossible for us to ignore the similarities of these systematic schools and the ethnic genocide being committed against minority groups all throughout China as we speak. This is a war that is not far from us. We stand here today and we mourn the victims of Canada’s cultural genocide, and we must fight for the victims who are suffering in China as well,” she stated.

“This is a day for us to share our voices with the oppressed and for us to reflect as a community; how and why we should always try to do better. I am grateful for my home, I am proud to be a Hong Konger and a Canadian, but I am not proud of our governments. And it is because of my love for my homes that enables me to stand here today and ask for your help in making these places better than they were yesterday. As constituents of the Canadian government, I urge us all to further educate ourselves and to understand transnational relationships that Canada shares with China, and to reach out to our local government representatives to enforce sanctions against the Chinese government, such as the boycotting of the Beijing 2022 Olympics,” she announced.

“We have an ongoing campaign to boycott the Beijing Olympics, and an authoritarian regime like China does not deserve a second chance to host the Olympics. We will continue to pressure our government, the Canada Olympic Committee, and corporate sponsors like Snickers and Airbnb, to completely boycott the Beijing Olympics and not be complicit in sports washing CCPs heinous crimes against humanity,” she added.

The protest was accompanied with wide support on social media. Hashtags of ‘NoBeijing2022’, ‘100bloodyYears’, ‘FreeTibet’, and ‘FreeEastTurkistan’ have been circulated in hopes of gathering more support and spreading awareness,