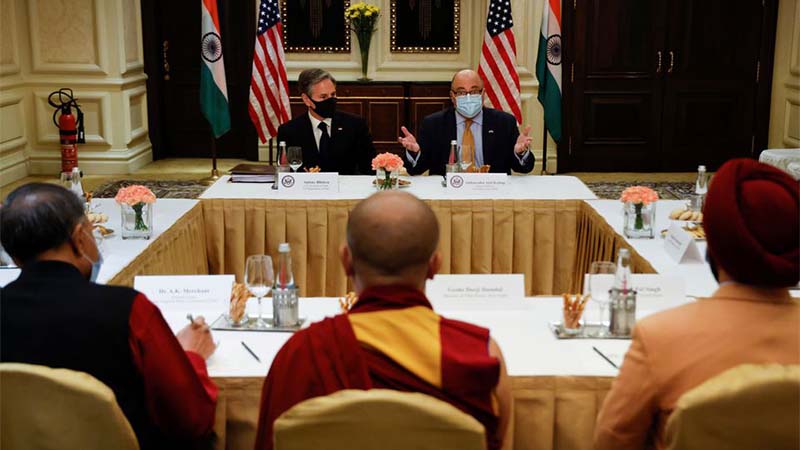 New Delhi, India — U.S. Secretary of State Anthony Blinken met with representatives of His Holiness the Dalai Lama, the spiritual leader of Tibet, during a two-day visit to India, in New Delhi on Wednesday, July 28, 2021, a State Department spokesman confirmed.

The meeting is expected to anger China, which considers Tibet to be “an integral part of China”. The meeting is taking place against the backdrop of tense relations between Washington and Beijing.

“I was pleased to meet civil society leaders today. The US and India share a commitment to democratic values; this is a part of the bedrock of our relationship and reflective of India’s pluralistic society and history of harmony. Civil society helps advance these values,” Blinken tweeted following the meeting.

“There is a greater imperative than ever on cooperation, coordination, and collaboration among countries, especially among countries that share basic perspectives, values and interests, and that is certainly the case with America and India,” Blinken stated during the meeting.

The Tibetan uprising of 1959 led to violent clashes between the Tibetan people and the Chinese army. His Holiness the Dalai Lama fled to exile in India after China annexed Tibet. He then established a government in exile in India.

The United States has been actively raising the issue of human rights violations in Tibet on various platforms. The Central Tibetan Administration(CTA) and other Tibetan advocacy groups have received a boost in international support in recent months amid rising criticism of China's human rights record, particularly from the United States.