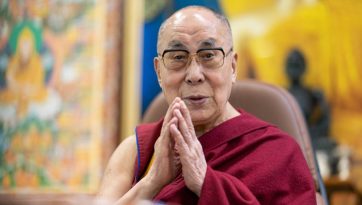 Dharamshala, India — More than hundred Nobel laureates have accused China of deliberately preventing His Holiness the Dalai Lama, the spiritual leader of Tibet, and Taiwanese chemist Yuan from speaking at the 2021 Nobel Prize Summit in April,2021.

The Nobel Laureates released a joint statement on Wednesday, July 28, 2021, to express their views on attempts to censor well-respected international leaders at the Nobel Prize Summit. “We Nobel Laureates are greatly concerned about a series of incidents that occurred prior to and during the Nobel Prize Summit, Our Planet, Our Future, held from April 26-28, 2021. The Summit brought together international thought leaders of all ages around the world to address some of the greatest challenges that humanity faces. The meeting was jointly sponsored by the Nobel Foundation and the US National Academy of Sciences,” the statement read, the Nobel Laureates highlighted their serious concern about the future of the world if such events continue to happen.

In addition, the statement detailed that the Chinese intervention occurred not only before the summit, but also during the virtual meeting. “In late March and again in early April, the Chinese Embassy in Washington telephoned a senior National Academy official and insisted that two of the scheduled speakers, the Dalai Lama and Dr. Yuan T. Lee, should be disinvited and not allowed to speak at the Nobel Summit. The embassy was told at both times that no such disinvitation would take place. On Sunday afternoon, April 25th, immediately before the Nobel Summit, the National Academy received an email from the Chinese Embassy demanding that the Dalai Lama and Dr. Yuan T. Lee is not be permitted to speak. Again, the request was denied,” said the Nobel laureate.

“During the first virtual session of the meeting on April 26th, the video transmission of the session was disrupted by a presumed cyber-attack. Again, on April 27th another cyber-attack disrupted the entire platform,” the statement read further, explaining what happened while the summit was in progress.

The Nobel Laureates further stressed the fact that regardless of whether the cyber-attack had a connection with the actions of the Chinese embassy or not, repeated attempts to bully well-respected personalities and prevent them from speaking anywhere outside China are unreasonable. “Regardless of whether these attacks were linked to the demands from the Chinese embassy, we are outraged by the Chinese government’s attempt to censor and bully the scientific community by attempting to prevent two of our fellow Laureates (or indeed anyone) from speaking at a meeting outside of China,” they said while expressing their outrage.

“We strongly believe that the free and open expression of ideas and the freedom of assembly are basic human rights, and international forums such as the Nobel Summit are essential means of finding solutions, maintaining international trust, and securing a more just and prosperous future. In so doing, these efforts will confer great benefits onto humankind,” said the Nobel Laureates, emphasizing the recognition of free and open speech as a basic human right that should be respected. The statement was signed by over hundred Nobel laureates who have received the Nobel Prize in different fields like chemistry, economics, literature, medicine, peace, and physics.

While concluding the statement, the Nobel laureates talked about the consequences of such attempted censorship. “The future of our planet will require collaboration between all nations and all scientists across the globe. Many of us have valued scientific colleagues and long-standing friends in China, with whom we interact productively. Unfortunately, actions such as those described above only serve to hinder such essential cooperation, and if continued, will affect our willingness to participate in events in China, particularly those fully or partially sponsored or supported by the Chinese government,” they said, expressing their concerns about the future cooperation with China.