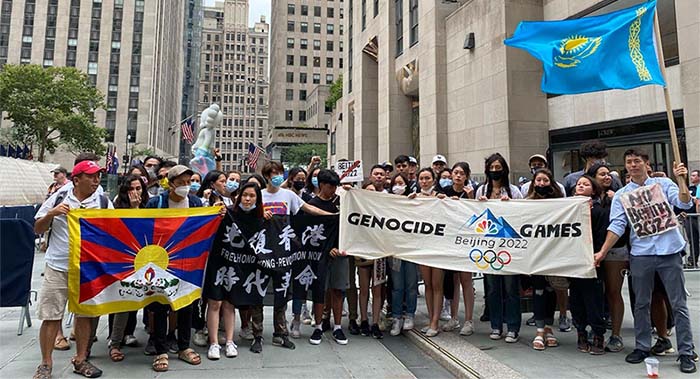 Activists from Tibet, Hong Kong and Uyghur protest against the sponsorship of the Beijing Winter Olympics in New York. Photo: File

New York, US — Activists from Tibet, Hong Kong, and Uyghur gathered at the National Broadcasting Company (NBC) merchandise store in New York City on August 8, 2021, to protest against NBC’s sponsorship of the 2022 Beijing Winter Olympics.

A video depicting Joey Siu, a policy advisor for Hong Kong Watch, was uploaded from Students for a Free Tibet's Facebook account. It calls out NBC, urging them to drop their sponsorship of the 2022 Winter Olympics in Beijing.

"Today, young activists from the Tibetan, Hong Kong and Uyghur communities gathered in front the headquarters of NBC in New York City to ask them to drop their sponsorship of the 2022 Beijing Winter Olympics," said Siu.

"We have seen that the Chinese Communist Party has been suppressing democracy in Hong Kong, occupying Tibetan lands, committing communal genocide in Turkestan, and separating thousands of Uighur families from their parents or children," said Joey Siu, while explaining the atrocities committed by the CCP which jeopardize humanity.

“There is no reason that Beijing should be allowed to host these very important international games and there is no reason for NBC to actively sponsor or promote these genocides. So we activists are here, standing here to ask NBC to stop their sponsorship,” the Policy Advisor said as a concluding note.

Many activists, leaders and organizations across the globe like Swiss Tibetan organizations, US Senator Jeff Merkley, numerous other members of Tibetan, Hong Kong, Uyghur communities have voiced their disappointment and urged the International Olympic Committee to relocate the Olympic winter games scheduled in February 2022 if the country does not change its conduct and continues to commit crimes and genocides against humanity.

“The OECD has a set of guidelines specifically designed for multinational enterprises like the IOC. According to the guidelines, the IOC should respect internationally recognized human rights and follow the code of human rights due to diligence guidelines when it comes to activities such as the 2022 Winter Olympics in Beijing”, says a report published by Tibet Post International. Countries like China have committed acts that violate the human rights code, so they should not be allowed to host international games.

Students for Free Tibet organization is planning other activities to highlight the problems CCP has created for people from the communities oppressed by CCP. For example, ‘United Against the CCP Rally’ is going to happen at Washington Square Park. “This event will feature testimonials of activists from various communities to highlight the dangers of the CCP regime,” said in their Facebook post.