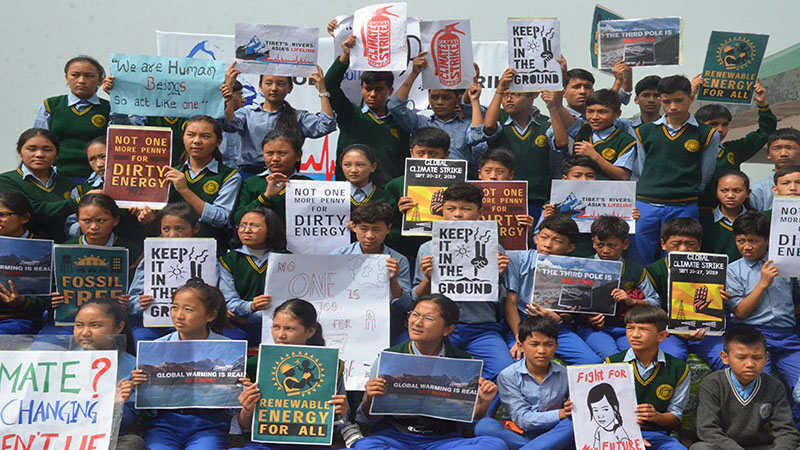 “Tibetans and supporters across the world are joining the Global Climate Strikes today, to raise awareness of the Climate Crisis in Tibet. Like the Arctic and Pacific island nations, Tibet - known as the Third Pole - is on the frontline of global climate change, warming on average three times as fast as the rest of the world. The impacts, including rising temperatures, melting of permafrost, changing precipitation patterns, and 8 billion tonnes of ice being lost each year from Tibet's glaciers, directly affect not only Tibetans, Tibet's wildlife and ecosystems, but the water security of 1.5 billion people downstream,” their joint statement said.

“The earth is burning and Tibet is meting. We are striking on 24 September in solidarity with the young people who have inspired this new movement, and to support the call for urgent and drastic action. We join hands with the people of the Amazon, Pacific Islands, and affected communities around the world in the quest for climate justice,” it added.

"Tibetans in Tibet are courageous and resourceful, but under China's rule, their voices have been brutally suppressed. It is imperative that the exile Tibet movement and our supporters put the Tibet Climate Crisis on the map. China's occupation prevents Tibetans in Tibet from being part of the global climate change conversation, but it is vital that they are part of the solution. China is riding roughshod over this unique land by building hundreds of mega-dams and wide-scale destructive mining projects. whilst removing the traditional custodians of the Plateau - Tibet's nomadic people. A fifth of the world's population relies on the rivers that rise on the Plateau,” they concluded.

On September 24, 2021, a global climate strike initiated by youth protesters will strike more than 1,400 locations with the message that "change is coming - from the streets."