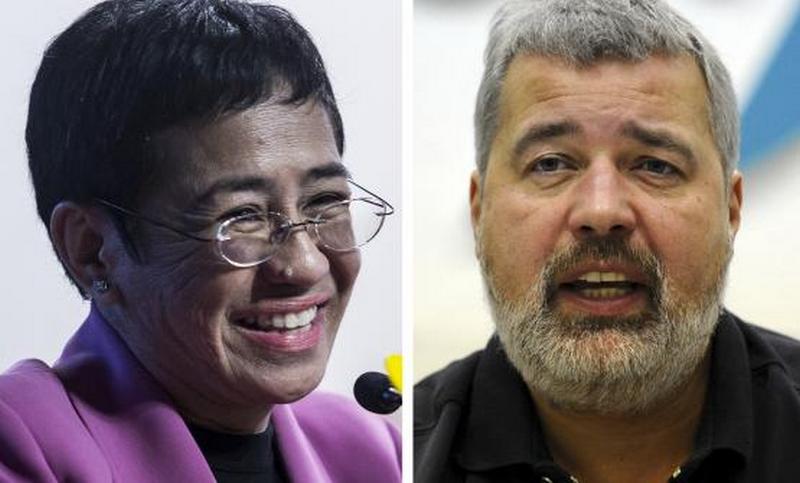 Paris — Journalists Maria Ressa of the Philippines and Dmitry Muratov of Russia were awarded the 2021 Nobel Peace Prize on Friday for their struggles for freedom of expression in their countries, where journalists are constantly subjected to attack, harassment and even murder.

In a statement issued on 8 October 2021, Reporters Without Borders, the Paris-based global press freedom watchdog said: "They represent all those who work with courage and determination for news and information that is reliable, and freely and independently reported, in world in which democracy and press freedom are increasingly undermined by the spread of fake news and hate speech".

The media watchdog said it "is delighted that the 2021 Nobel Peace Prize has been awarded to two prominent and courageous journalists. This is a tribute to all those who work tirelessly for freely and independently reported news and information".

This year’s Nobel Peace Prize is being shared by Philippine journalist Maria Ressa, the founder of the Manila-based investigative news website Rappler, and Russian journalist Dmitri Muratov, the editor of the Moscow-based independent newspaper Novaya Gazeta.

“We extend our warmest congratulations to the two winners, who embody the fight for journalistic independence,” RSF secretary-general Christophe Deloire said. “This prize is an extraordinary tribute to journalism and a mobilisation appeal, because this decade will be absolutely decisive for journalism. It is a powerful message at a time when democracies are being undermined by the spread of fake news and hate speech.”

RSF and the #HoldTheLine coalition jointly launched an unprecedented solidarity campaign for Ressa in July 2020, creating a dedicated website on which a fund-raising appeal and hundreds of videos recorded by influential figures will continue to play non-stop until the Philippine authorities drop all the charges they have brought against Ressa and Rappler.

In the Forum on Information and Democracy, the entity created to help implement the Partnership’s policies, Ressa co-chaired the working group on combatting “infodemics”, which published 250 recommendations in November 2020.

The Nobel Committee praised the two as "representatives of all journalists who stand up for this ideal". "Free, independent and fact-based journalism serves to protect against abuse of power, lies and war propaganda," the committee said in a statement, adding: "Without freedom of expression and freedom of the press, it will be difficult to successfully promote fraternity between nations, disarmament and a better world order to succeed in our time".

Two brave journalists, Maria Ressa and Dmitry Muratov, were awarded the Nobel Peace Prize for their fight for freedom of expression in the Philippines and Russia. They are known for their investigations which have angered the leaders of their countries and have been the subject of major threats. However, they have both defended press freedom.

Ressa, 58, co-founded "Rappler" in 2012. The site now has 4.5 million followers on Facebook, and has become known for its intelligent analysis and hard-hitting investigations. It is one of the few Philippine media organisations to openly criticise President Rodrigo Duterte and his policies.

The Rappler has published numerous articles on the populist president's deadly war on drugs, while taking a critical look at issues of misogyny, human rights abuses and corruption. She has personally reported on the spread of government propaganda on social media.

Ressa has faced numerous court cases that she says are politically motivated. The government has maintained its legitimacy. In a statement, Rappler said it was "honoured and astounded" that its chief executive had been given the prize. "It could not have come at a better time - a time when journalists and the truth are being attacked and undermined," it added.

Dmitry Muratov, 59, co-founded Novaya Gazeta in 1993 and has since worked as its editor. Novaya Gazeta is one of the few remaining newspapers in Russia to be highly critical of the Russian government, particularly President Vladimir Putin.

Published three times a week, it regularly runs investigations into alleged corruption and other malpractice in ruling circles, and highlights the plight of people it considers victims of official abuse. The newspaper has been subjected to threats and harassment, including over its reporting of human rights abuses in Chechnya.

Muratov said he would use part of his share of the 10 million Swedish kronor (over $1.14 million) prize money to help independent media as well as a Moscow hospice and children with spinal muscular problems. He said he wouldn’t keep any of the money himself.