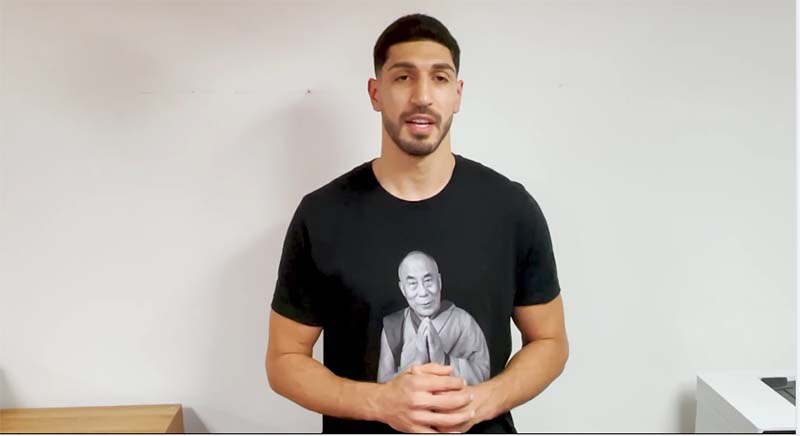 On October 20, 2021, the NBA basketball player Enes Kanter tweeted a video of him wearing a black T-shirt with an image of His Holiness the Dalai Lama, the spiritual leader of Tibet and sending a message to Chinese President Xi Jinping and the Chinese government with the caption "Dear brutal dictator Xi Jinping and the Chinese government, Tibet belongs to the Tibetan people!."

“For more than 70 years, Tibetan monks, nuns, intellectuals, writers, poets, community leaders, and actors have been detained, sent to political reeducation classes, tortured, and even executed simply for the freedoms you and I take for granted.

“There are more than 5,000 prisoners in Tibet in the last 25 years, and did you know that anyone can be arrested in Tibet for having a photo of the Dalai Lama, or even for flying the Tibetan flag? I say, shame on the Chinese government.

"Chinese dictatorship is erasing Tibetan identity and culture, and the cultural genocide is so stiff that, more than 150 Tibetans have burned themselves alive, in the hope that this horrific act of sacrifice will raise awareness and attention towards the ongoing situation in Tibet.

“After learning all of these, I can not stay silent, I stand with my Tibetan brothers and sisters, and I support their cause for freedom. The communist ideology of China has been only around 100 years, but Buddhist civilization, ideology, and philosophy have been around for thousands of years. Only Tibetan people should decide the future of Tibet, Tibet belongs to Tibetan people.