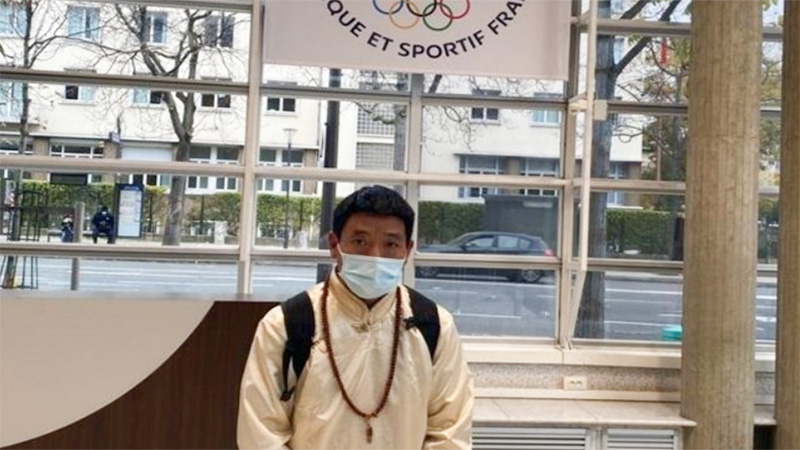 Paris, France — Tibetan filmmaker Dhondup Wangchen in Europe to raise awareness about China's ongoing Human Rights violations in Tibet and said “I made a film called Leaving Fear Behind, interviewing Tibetans on the ground to air their views and grievances and for this 25-minute film, China tortured me and gave me a six-year prison sentence. China does not deserve the honour of hosting the 2022 Winter Olympics and the IOC should withdraw all athletes.”

Tibetan activist and filmmaker Dhondup Wangchen has launched his European speaking tour on November 19, 2021, in Paris, France. At the offices of the National Olympic Committee of France, Dhondup Wangchen handed over a letter stating his main demand - that the 2022 Winter Olympics not be held in Beijing.

“I am touring European countries to shine the spotlight on China’s continued human rights abuses, particularly in Tibet. In the run-up to the 2008 Beijing Games, China promised that its human rights record would improve. Back then, I believed in the International Olympic Committee and trusted them to live up to their promises,” said Dhondup Wangchen.

“I made together with the help of some friends the documentary film Leaving Fear Behind, interviewing Tibetans on the ground to air their views and grievances, and for this 25-minute film, China tortured me and gave me a six-year prison sentence. China does not deserve the honour of hosting the 2022 Winter Olympics and the IOC should withdraw all athletes,” he said.

“You see the world coming together, I see a suffering nation(Tibet), forgotten. Athletes are preparing for the biggest competition of their life, yet my brothers and sisters are struggling for fundamental rights. As the 2022 Games approach, I want to share with you my personal Olympic oath. I promise to strive for the fundamental rights of all people. I do this for the honour of my own people and all oppressed persons. In respect for the fundamental principles of Olympic Tradition, and to strive to make the world a better place,” said the Tibetan filmmaker in his Olympic oath video.

“In 2008, China broke every promise it made to upload Olympic ideals. As a result, blood was shed. Let history not repeat itself. At great risk, I escaped from Tibet in 2017. China tried to silence me then, but they can not now,” he added.

Over the next three months, Dhondup Wangchen will visit 15 countries and meet with National Olympic Committees, government officials, media and Tibet supporters to share his experiences and to gather support for his campaign. He will screen his new short film My Olympic Oath in which he pledges to strive for the fundamental rights of all people in line with Olympic principles of fairness. On tour, he will encourage others to pledge support for his campaign by taking their own Olympic oath.

“Dhondup Wangchen is a courageous man who has risked his life many times over for his country and people. His powerful new short film is a testament to his determination and strength to speak out. It is time for the IOC to finally listen to voices of people who have directly been impacted by China hosting the Olympics,” said Tsejin Khando Bhotia, spokesperson for Filming for Tibet.

“The life of Dhondup Wangchen tells the powerful story of a Tibetan man who won’t be silenced. Surviving six years of torture and imprisonment, Dhondup Wangchen is a real inspiration as he continues to relentlessly speak out for justice and freedom. In 2021, the Olympics Committee must not ignore their responsibility any longer and need to stop supporting China’s sports wash of atrocious human rights abuses.” said Laila Tara Schumann, Campaigns Coordinator at International Tibet Network.

Dhondup Wangchen’s European speaking tour from November 17 to 23 has been organised jointly by Filming for Tibet and International Tibet Network. He is hosted in France by Students for a Free Tibet (SFT) France. Then he will go to Belgium, the UK, Denmark, Norway, the Czech Republic, Lithuania, Switzerland till February 10, 2022.