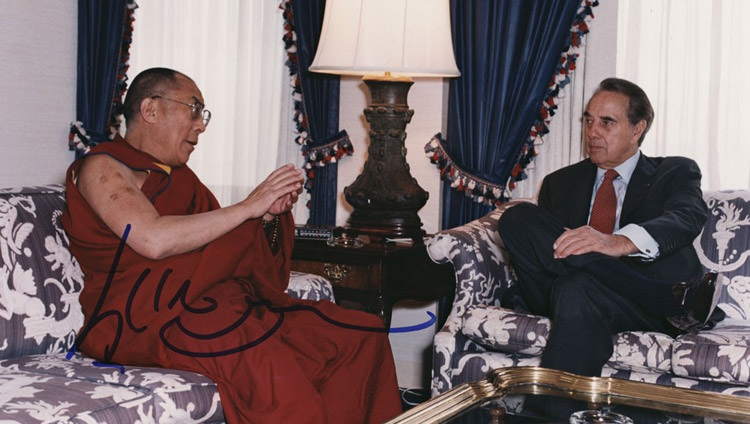 His Holiness the Dalai Lama with Senator Bob Dole in 1997. Photo: official of His Holiness

Dharamshala, India — His Holiness the 14th Dalai Lama of Tibet expressed his condolences on the demise of former Senate leader and presidential nominee of US, Senator Bob Dole, who passed away on December 5, 2021.

Following the passing away of former Senator and presidential nominee of US, Robert Joseph Dole, His Holiness the Dalai Lama has written to his widow, Senator Elizabeth Dole, to express his deepest condolences.

“Senator Bob Dole was one of the Senators I had the privilege to become well-acquainted within Washington, D.C.,” he wrote. “Every time I met him, I was aware of the genuine care and compassion he felt for people less able to help themselves or those who, like Tibetans, are struggling to preserve their freedom and culture. He was a friend of the Tibetan people.

“Senator Dole led a rich and meaningful life, having dedicated himself to public service for several decades. He represented the best of American values, for which I have the greatest respect, focused as they are on liberty, equality, and justice. He also showed his colleagues through personal example that they could disagree on principles, but still respect each other as human beings.”

His Holiness concluded by offering his prayers.

A well-known third-person self-referrer, Dole took a classic American journey from the poverty of the Great Depression of the 1930s to the battlefields of World War II and then to the corridors of power with a stoic Midwestern dignity.

Born on July 22, 1923, one of four children of a grain lift manager and a traveling saleswoman in Russell, Kansas. As a lieutenant in the U.S. Army during World War II, Dole led an assault on a German machine-gun nest in Italy. A shell shattered his right shoulder, paralysed his right arm, shattered vertebrae, riddled him with shrapnel and cost him a kidney.

With the permanent loss of his right arm, he later became an advocate for the disabled. Decorated for his heroism, Dole spent 39 months in hospitals before returning to civilian life. He attended law school, not knowing how to write but getting by with the help of his first wife, Phyllis, who transcribed the lectures he recorded. Dole had a daughter, Robin, from his first marriage.

Represented Kansas in Congress for 35 years: He represented Kansas in Congress for 35 years: from 1961 to 1969 in the House of Representatives and from 1969 to 1996 in the Senate, and was Senate Majority Leader in the 1980s. He was instrumental in the passage of the Americans with Disabilities Act of 1990, which prohibits discrimination on the basis of disability in employment, public accommodations and transportation.

As a candidate for vice president in 1976, Dole ran on a ticket headed by incumbent Gerald Ford, but lost to Democrat Jimmy Carter and his running mate Walter Mondale. Dole ran for president three times and was the Republican Party's nominee in 1996.

In 1996, he defeated his rivals, including conservative commentator Pat Buchanan, to win the Republican presidential nomination, but at the age of 73, he lost to Bill Clinton, then 50, the charismatic embodiment of the post-war baby boom who had already overcome charges of adultery and escape from the military.

By 1997, Clinton had awarded Dole the Presidential Medal of Freedom, the nation's highest civilian honour. In 2018, he was awarded the Congressional Gold Medal, the highest honor Congress can bestow. He became active in the 2016 Republican presidential campaign by endorsing Jeb Bush and joining his campaign.