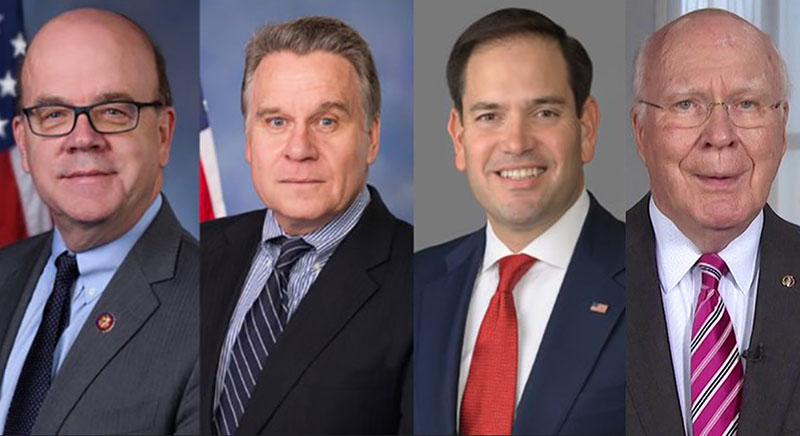 Washington, D.C, US — “Four of the last five Presidents have hosted the Tibetan spiritual leader and Nobel Peace Prize laureate in the White House. President Biden can demonstrate the importance of His Holiness’ message on the moral necessity of addressing climate change by inviting His Holiness to meet in the Oval Office to discuss their shared interests in the environment and the peaceful resolution of conflict,” said a bipartisan group of 27 U.S. House lawmakers in a letter to President Biden.

United States Congressmen Jim McGovern (D-MA) and Chris Smith (R-NJ) led a bipartisan group of 27 House lawmakers in sending a letter to the Biden Administration asking that Tibet be made a priority. McGovern and Smith have been leading voices in Congress in support of human rights in Tibet. They co-authored the Tibet Policy and Support Act, which became law in 2020, and McGovern authored the Tibet Reciprocity Act, which became law in 2018.

“Advocacy for the rights and dignity of the Tibetan people, by Administrations of both parties, has long been an expression of a principled foreign policy grounded in universal values and support for democratic freedoms,” wrote the lawmakers in their letter.

“Tibet matters to us, not only as an issue that is important to our constituents and the Tibetan-American community, but also as a tangible manifestation of a values-based foreign policy that prioritizes human rights and the quest for human dignity,” they wrote.

“A companion letter, which was signed by a group of bipartisan members in the United States Senate, was led by Senators Marco Rubio (R-FL) and Patrick Leahy (D-VT),” said the press statement.

In their letter to Under Secretary of State for Civilian Security, Democracy and Human Rights, who is expected to be appointed Special Coordinator for Tibetan Issues, the lawmakers provided 11 specific areas where the Biden administration and Congress can collaborate to advance U.S. policy on Tibet consistent with U.S. law, including the 2002 Tibetan Policy Act and the 2020 Tibetan Policy and Support Act (TPSA).

In the letter to the Under Secretary of State for Civil Security, the lawmakers listed 11 areas in which Congress and the Biden administration could work together on Tibet, including:

Engage with His Holiness the Dalai Lama. Four of the last five Presidents have hosted the Tibetan spiritual leader and Nobel Peace Prize laureate in the White House. President Biden can demonstrate the importance of His Holiness’ message on the moral necessity of addressing climate change by inviting His Holiness to meet in the Oval Office to discuss their shared interests in the environment and the peaceful resolution of conflict. If His Holiness is unable to travel, then the President should send a high level representative to meet with him in India.

Deepen engagement with the Central Tibetan Administration (CTA). Over the last several years, through specific appropriations by Congress, the U.S. government has increased its support for projects to improve the welfare and education of Tibetans in CTA-administered communities in India and Nepal. In April 2021, Tibetans in exile chose a new leader through democratic elections. We encourage you to engage Sikyong Penpa Tsering on ways to improve the livelihoods of Tibetans within the CTA, to protect Tibetan culture and language, and to resolve the Tibet conflict consistent with Tibetan aspirations for dignity and freedom.

Religious freedom and the Dalai Lama’s reincarnation. The Tibetan Policy and Support Act affirmed U.S. policy that decisions involving the next Dalai Lama belong solely to him and the Tibetan people. We welcome the Biden Administration’s support of this principle. We urge you and other Administration officials to publicly re-iterate this policy and work with like-minded governments to craft a multilateral strategy to affirm this principle as the international norm, not only as a matter of religious freedom but as a strategic counter to Chinese government’s claims of ownership to the land of Tibet and its assertion of control over the Dalai Lama lineage.

Access to Tibet. We encourage you to ensure full implementation of the Reciprocal Access to Tibet Act. We look forward to receiving reports required by sections 4(a) and 5(c) that are due this summer, and seek assurances that the Department is doing all it can to ensure access to Tibetan areas in keeping with the principle of reciprocity. Likewise, we note the importance of restoring opportunities for engagement with the Tibetan people inside Tibet and for monitoring of developments on the Tibetan plateau. Many of us wrote to the Department last year to express our concern that the closure of the U.S. consulate in Chengdu in July 2020 would impede the U.S.’s ability to monitor conditions in Tibetan areas. We reiterate those concerns. Further, we affirm our interest in the establishment of a U.S. consulate in Lhasa as expressed in section 618 of the TPSA, and encourage you to work with the relevant officials in the Department to accomplish this goal.

Help invigorate a political initiative to put Tibetans back at the table. The last round of the Sino-Tibetan dialogue was held in January 2010. The Chinese side has shown no interest in further talks, insisting that the Dalai Lama first meet unreasonable conditions. Persistent calls from the U.S. and other governments for a resumption of dialogue have failed to produce results. We encourage the U.S. government to engage earnestly with both sides, like-minded partners, and experts to explore novel strategies that could produce forward movement, grounded in the idea that there can be a mutually agreeable solution to the Tibet issue.

Language on Tibet’s status. We appreciate that the Tibet section of the 2020 Country Reports on Human Rights Practices does not refer to Tibetan areas as “part of the People’s Republic of China.” The Chinese government has demanded, as a precondition to dialogue, that the Dalai Lama state that Tibet has been a part of China “since ancient times,” which the Dalai Lama has refused to do on the grounds that it is false. The Chinese government has asked several governments to state that “Tibet is part of China,” with success, and cited these statements to portray the Dalai Lama as isolated. These actions by the Chinese government are obstacles to dialogue. Consistent with the Department’s calls for dialogue without preconditions, we would welcome the exclusion of this phrase from future reports and statements, both as a means to promote renewed negotiations between the Chinese government and the Dalai Lana or his representatives, and as an opportunity to ground U.S. policy on respect for historic accuracy and the Tibetan peoples’ rights under the International Covenant on Civil and Political Rights.

Tibetan refugees in Nepal. Thousands of Tibetan refuges reside in Nepal without legal status and without a path to acquire such status. They are vulnerable and lack means to assert rights to equal treatment before the law, education, land ownership, freedom of movement, and employment. There has been a frustrating inertia on this issue for decades. We encourage you to work expeditiously with like-minded governments on solutions to provide status for those in Nepal and a process for those who wish to resettle elsewhere.

Support Tibetan language and culture. Authorities in Tibetan areas of the People’s Republic of China continue to privilege Mandarin and decrease the role of Tibetan in educational settings, in tandem with policy directives from Chinese leaders for the “Sinicization” of Tibetan Buddhism. We urge the U.S. government to continue to fund programs, by both the Department and USAID, to help Tibetans preserve their language and cultural identity, including exchange and scholarship programs. We also ask you to ensure that Tibetan language training is provided to foreign service offices, per the Tibetan Policy Act.

Tibetan cultural heritage at risk. The World Heritage sites in Lhasa, Tibet, categorized as the Historic Ensemble of the Potala Palace, including the Jokhang Temple and Norbulingka, are at risk due to adjacent economic development projects and a 2018 fire at the Johkang Temple. The 2021 World Heritage Watch report recommends that UNESCO’s World Heritage Committee designate the site as a World Heritage in Danger.” We urge you to coordinate efforts within the Department to work with UNESCO to support the preservation of Tibet’s distinct cultural heritage.

Tibetan political prisoners. Tibetans have long been subject to particularly harsh treatment in the Chinese criminal justice system, and contribute disproportionately to the numbers of political prisoners in China. The Congressional-Executive Commission on China’s Political Prisoner Database contains thousands of records of Tibetans detained since the 1980s for political or religious reasons, and currently counts 687 such Tibetans who are known or believed to currently be in detention. We urge you to advocate on behalf of Tibetans detained or imprisoned in the People’s Republic of China due to exercise of their internationally recognized human rights, seeking their release or improved treatment while held in custody.

Multilateral coordination. We encourage you to prioritize coordination with like-minded states on policy and initiatives on Tibet, including to promote negotiations on a political resolution as provided for by the TPSA. Such coordination is critical to affirming the right of the Dalai Lama to choose his successor, and important to efforts to monitor and improve the environment on the Tibetan Plateau, including glacial retreat, temperature rise, carbon sequestration, river flow, grasslands and desertification, and the monsoon cycle, given the global and regional impact of changes in these factors.