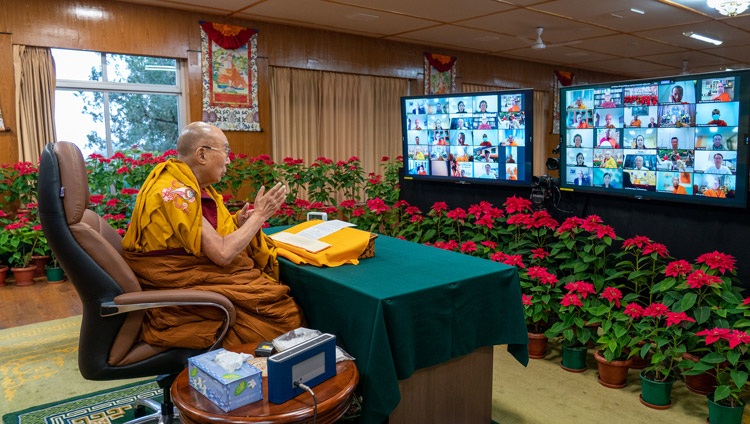 Dharamshala, India —“ Spiritual practitioners need to be able to identify with practitioners who belong to other traditions, recognize what they have in common - ethics, avoid harm, and cultivate a warm heart and compassion. Along with patience and forgiveness, these are universal values,” said His Holiness the Dalai Lama on December 17, 2021.

His Holiness the Dalai Lama conducted a two-day commentary on Maha-Satipatthana Sutta for Buddhists from Sri Lanka, Thailand, Malaysia, and Indonesia on December 17-18, 2021. This was followed by an online question and answer session from his residence in Dharamshala, HP, India.

His Holiness the Dalai Lama said, “spiritual practitioners need to be able to identify with practitioners who belong to other traditions, recognize what they have in common - ethics, avoiding harm, cultivating a warm heart and compassion. Along with patience and forgiveness, these are universal values.”

"I greatly appreciate the Indian heritage, which has enabled multiple spiritual traditions - such as Buddhism, several sects of Hinduism, Islam, Christianity, Judaism, and Sikhism - to flourish together. Another important part of the Indian tradition is ahimsa, or nonviolence, which emerges from the cultivation of karuna, or compassion,” he added.

"We should understand that there are those whose interest in Buddhist teachings lies less in religious practice and more in psychological and philosophical insights. Therefore, we must work together to both preserve the traditional role of Buddhism and to present it as a science of mind in a secular context,” the spiritual leader of Tibet said.

“The Buddha explains what the four mindfulnesses are. He describes the physical posture to adopt in a quiet place to settle the mind. Then he introduces mindful breathing, bringing awareness to inhaling and exhaling, whether in short or long breaths. By maintaining such mindfulness and meta-awareness of it there is focus on the breath. This leads to deeper mindfulness,” His Holiness explained.

“Next the body is taken as the object of mindfulness and awareness. There is mention of the four postures: lying down, standing, walking, and sitting. Mindfulness and meta-awareness have to be applied constantly, otherwise, when the mind runs free, many problems arise,” he continues.

“Looking at the nature of different aspects of the body reminds us that existence is conditioned by suffering. And if we ask, what is suffering? what is its origin? It is in the mind,” he added.

“The meditation moves from mind to objects of the mind. Recognising that many of the things we believe are constructs of the mind brings us close to understanding selflessness or emptiness. Since there is nothing solid about reality, nothing that has an independent existence, the whole basis for attachment is undermined,” His Holiness the Dalai Lama described.