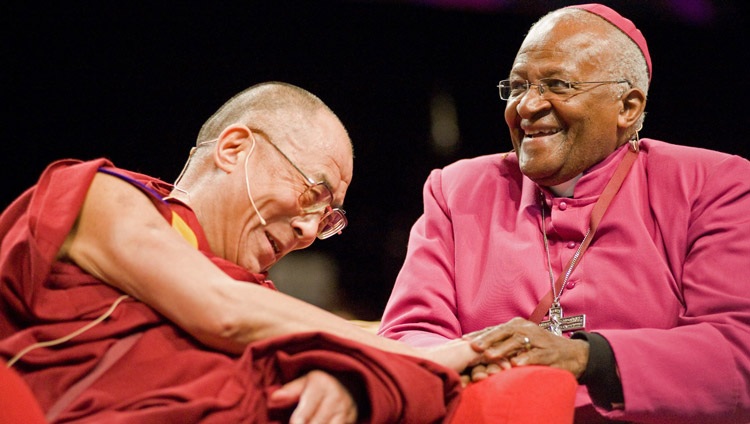 His Holiness the Dalai Lama and Archbishop Desmond Tutu in Seattle, Washington, USA on April 15, 2008. Photo: Tomas/Seeds of Compassion

Dharamshala — His Holiness the 14th Dalai Lama has written a letter of condolence to Archbishop Desmond Tutu's daughter, Rev Mpho Tutu, praising Tutu for being "a true humanitarian and a committed advocate of human rights".

Condolences are pouring in from around the world for Archbishop Tutu, South Africa's Nobel Peace Prize laureate who passed away Sunday at the age of 90.

The letter of condolence published on the official website with the portrait of His Holiness the Dalai Lama and Archbishop Desmond Tutu during the Seeds of Compassion interfaith dialogue in Seattle, Washington, USA, 15 April 2008.

“Please accept my heartfelt condolences,” he wrote, “and convey the same to your mother and other members of your family. I pray for him," said His Holiness the Dalai Lama.

“As you know, over the years, your father and I enjoyed an enduring friendship. I remember the many occasions we spent time together, including the week here at Dharamsala in 2015 when we were able to share our thoughts on how to increase peace and joy in the world. The friendship and the spiritual bond between us was something we cherished,' the Tibetan Nobel Peace Lureate added.

“Archbishop Desmond Tutu was entirely dedicated to serving his brothers and sisters for the greater common good. He was a true humanitarian and a committed advocate of human rights. His work for the Truth and Reconciliation Commission was an inspiration for others around the world," the spiritual leader of Tibet continued.

“With his passing away, we have lost a great man, who lived a truly meaningful life. He was devoted to the service of others, especially those who are least fortunate. I am convinced the best tribute we can pay him and keep his spirit alive is to do as he did and constantly look to see how we too can be of help to others,” His Holiness concluded.

Tutu was one of the most prominent black South Africans throughout the 1980s to speak out against abuses in the country, such as the violence of apartheid and the state of emergency that gave the police and military overwhelming power. He was awarded the Nobel Peace Prize in 1984 for his work.

Tutu often worked with Nelson Mandela, another Nobel laureate and anti-apartheid activist, who, after spending 27 years in prison under white rule, became South Africa's first president in 1994. As president, Mandela appointed Tutu to chair the Truth and Reconciliation Commission, which exposed the abuses of the apartheid system.

He was a strong voice for the Tibetan people, often expressing support for the cause of Tibetan freedom and solidarity with Tibetans suffering under Chinese occupation. He became a very close spiritual friend of His Holiness the Dalai Lama.

Accepting the "Tibet's Light of Truth" award in 2006, from His Holiness the Dalai Lama "on behalf of the heroes and heroines who often go unmentioned", Archbishop Tutu drew comparisons between the struggle to end apartheid and the Tibetan struggle.

Tutu strongly called on the Chinese government Beijing to “do the right thing” for the Dalai Lama and Tibet and expressed his hope that China´s emerging global political status would see it be a “superpower for the promotion of freedom in the world, especially in Tibet.”

“Bad people do not have the last word. They may have guns and power, but they have already lost…Justice, goodness, compassion and love will prevail. Freedom is unstoppable,” Tutu added.