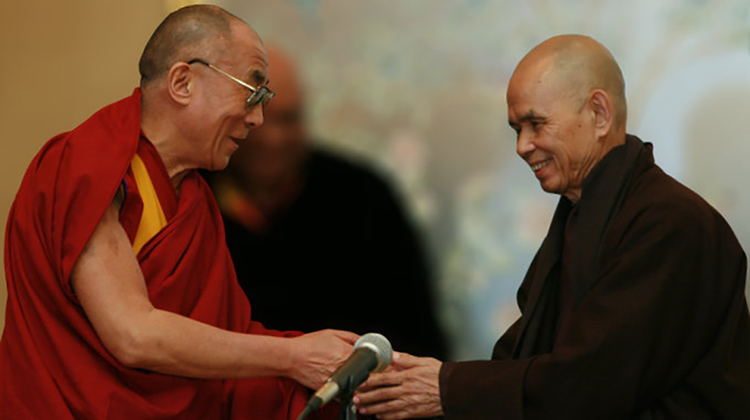 Dharamshala, India — His Holiness the Dalai Lama was deeply saddened to learn that his friend and spiritual brother, Venerable Thich Nhat Hanh had passed away. His Holiness expressed his condolences to his followers in Vietnam and around the world.

There were a number of world spiritual leaders, Buddhist leaders, teachers and organisations who took to various platforms, including social media, to pay tribute to Thich Nhat Hanh after his death on January 22.

In his letter of condolence, His Holiness the Dalai Lama wrote, “I am saddened to learn that my friend and spiritual brother Venerable Thich Nhat Hanh has died. I offer my condolences to his followers in Vietnam and around the world”.

His Holiness wrote, “in his peaceful opposition to the Vietnam war, his support for Martin Luther King and most of all his dedication to sharing with others not only how mindfulness and compassion contribute to inner peace, but also how individuals cultivating peace of mind contributes to genuine world peace, the Venerable lived a truly meaningful life.”

"I have no doubt the best way we can pay tribute to him is to continue his work to promote peace in the world," the Tibetan Spiritual leader concluded.

In his home country of Vietnam, Nhat Hanh passed away at Tu Hieu Temple in the city of Hue. Known as "the father of mindfulness," Nhat Hanh had a global impact as a lecturer, author, activist, and founder of the Engaged Buddhism movement.

Born Nguyen Xuan Bao in central Vietnam on 11 October 1926, Thay was an influential Zen teacher, poet, and the author of more than 100 books translated into over 40 languages, including the bestselling The Miracle of Mindfulness, Peace is Every Step, and How to Love.

As an unwavering advocate for peace, he was influential in the anti-war movement, encouraging non-violent protests during the American war in Vietnam. Before leaving Vietnam, Thay spearheaded a movement by Buddhists in the south calling for a negotiated end to the bloody conflict.

Thay went on to found the Order of Inter-being and the Unified Buddhist Church, and in 1982 formed the Plum Village Buddhist Center near Bordeaux in southwestern France with Sister Chan Khong. Establishing a profoundly deep legacy of teachings, writings, and public works spanning decades, Thay became a central figure in the transmission of Buddhism to the West and in marrying an authentic Zen tradition and lineage with a progressive approach to issues such as social activism, peace advocacy, science versus faith, and religion versus spirituality.

Often known as “the father of mindfulness” who sowed the seeds of the modern mindfulness movement, Thay taught many of today’s leading mindfulness teachers, and developed healing methodologies that have been incorporated into mainstream clinical psychology to treat depression, anxiety, and stress.

Thay was hospitalized in France in November 2014, following a severe brain hemorrhage. In April 2015, after months of rehabilitation, he returned to his Plum Village monastic community, where attendants from the monastery and visiting medical professionals continued to aid his recovery. In July of the same year, Thay was flown to San Francisco to undergo a more intensive rehabilitation program, and in September 2015, Thay spoke his first words since his stroke. The following January, he was allowed to return to Plum Village, where he remained under the care of the members of his community.

In December 2016, two months after his 90th birthday, Thay communicated a clear and determined wish to travel from France to Thailand in order to be closer to his homeland. In August 2017, Thay made his first visit to Vietnam in more than a decade, spending several days in Da Nang before visiting his hometown in nearby Hue and paying respects at his ancestral shrine and his lineage’s root temple, Tu Hieu, of which he remained the abbot. Thay spent the remainder of his life at Tu Hieu Temple in the loving care of his closest followers until his passing on 22 January