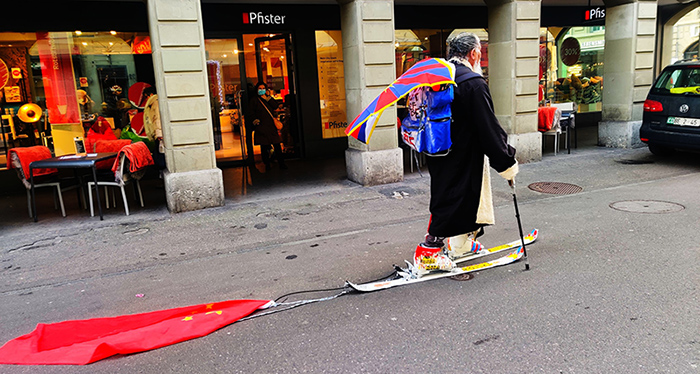 Bern — A Swiss-Tibetan musician and activist, Loten Namling, walks in ski boots from Bern to the IOC in Lausanne, Switzerland, to raise awareness among Swiss athletes about the Chinese government's inhumane treatment of Tibetans, Uighurs, Southern Mongolians and Hong Kongers, and to urge them to boycott the Olympic Games in Beijing.

On 26 January 2022, Loten Namling, a Swiss-Tibetan musician, walks in ski boots from Bern to the IOC in Lausanne, Switzerland, and said, “For Tibetans, East Turkestans, South Mongolians and Hong Kongers, the Beijing 2022 Winter Olympics is a " Genocide Olympics" and I hope that the Swiss government will announce a diplomatic boycott of the Beijing 2022 Olympic Games.”

“The ski boots, representing Winter Olympics is my way of appealing to the sports men and women of Switzerland to kindly think of the suffering that the mountainous people of Tibet and others are experiencing under the oppressive Chinese regime and to do the right thing in boycotting the Beijing Winter Olympics,” Loten said.

“I know for many Olympians this would be a once in a lifetime opportunity but by siding with the oppressed people of the world you will be on the right side of history and will be showing the human side of the people of Switzerland,” he added.

“Your action will also save innocent lives, bring smiles and dignity to fellow human beings and once again put the global spotlight on the brutal and inhumane Chinese regime, which we all know did nothing much to stop the spread of Coronavirus that originated from Wuhan and caused the death of millions and untold suffering to the whole world. Now is the time to stop China and I humbly urge the athletes in Switzerland to take the lead in boycotting the “2022 Beijing Winter Olympics,” the activist said.

“So whilst appreciating all the efforts being made on various fronts, I too would like to add my voice as a Swiss-Tibetan and make an appeal especially to the athletes in Switzerland not to take part in the controversial “2022 Beijing Winter Olympics”, he said while he urging Swiss government to boycott the Beijing Olympics.

“I am now attempting a never before done arduous walk from Bern to the IOC headquarters in Lausanne wearing a heavy and modified ski boot. The plan is to start my walk from Bern on January 26, 2022, and reach Lausanne on February 3, 2022. It would have been easier to ski but I have taken up the uncomfortable challenge to walk on the road on ski boots designed similar to the “Free Tibet” sneakers worn by Turkish-American basketball player for the Boston Celtics opening game last November in the United States that paid tribute to those Tibetans who have self-immolated for the cause of Tibet. The NBA star who changed his legal name to Enes Kanter Freedom after he gained US citizenship is an outspoken critic of the Chinese regime for its treatment of Uyghurs, Tibetans, and Hong Kongers. He has branded the Chinese President as “brutal dictator Xi Jinping”, the activist explained.

“The countdown to the 2022 Beijing Winter Olympics scheduled to take place from 4 to 20 February 2022 has begun with calls for boycott because of the totalitarian Chinese Communist regime’s violation of human rights and rule of law,” a statement of Loten stated.

“Several influential countries such as the United States, Australia, United Kingdom, and Canada have announced a diplomatic boycott of the competition to protest Beijing’s ongoing abuses. Other countries are following and hope the Swiss government too will abide by the boycott call,” it added.

“But for people of Tibet, Eastern Turkestan [Xinjiang], South Mongolia and Hong Kong, who consider Beijing 2022 Winter Olympics as “Genocide Olympics” the realisation of a complete boycott of the games would be the best result. They strongly feel that the Chinese Communist Party [CCP] will use the “2022 Beijing Games” to “sportswash” its dismissal record on human rights abuses, including genocide,” it said.