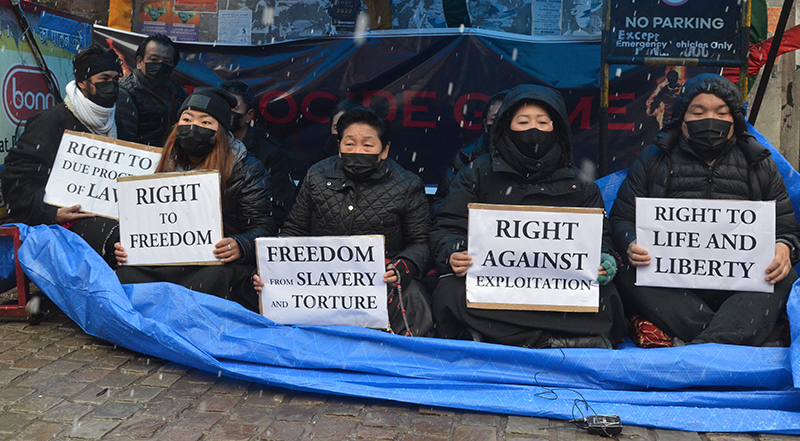 10 Tibetans from the five NGOs joined the hunger strike to protest against Chinese oppressive policies in Tibet on 4 February 2022. Photo: TPI

Tibetans and Tibet supporters around the world, including in India, the United States, Canada, France, Belgium, Switzerland, Australasia, and New Zealand, have protested against the Beijing 2022 Winter Olympic Games as the Chinese government has trampled on human rights, religious freedom and language rights of Tibetans, committed genocide against the Uighurs by placing them in labour camps, and violated the fundamental freedoms of other minorities under Chinese occupation.

On February 4, 2022, five major Tibetan non-governmental organisations (NGOs), including the Central Tibetan Youth Congress, the Tibetan Women's Association, the Tibetan National Democratic Party, the Gu Chu Sum Movement Association of Tibet, and Students for a Free Tibet-India, held a press conference and hunger strike for one day to protest against the oppressive policies against Tibetans and to reiterate that China cannot host the 2022 Winter Olympic Games in Beijing.

“China has been implementing policies that are aimed at wiping out Tibetan identity since Tibet was occupied by China. Tibetans are continuously denied human rights, religious freedom, and language rights. China hosting the 2022 Winter Olympics in Beijing at such a critical situation inside Tibet is a clear failure of the international community to stand up against China. Tibetans and other oppressed people under Chinese regime have been living under oppressive Chinese policies. Moreover, Chinese people themselves are denied freedom and equal rights. Thus, 1.4 billion Chinese people are living under the draconian rule of the Chinese Communist Party,” said a statement of the five NGOs during the press conference on February 4, 2022.

“The expansionist policies of the Chinese Communist Party have stretched beyond China to pose threat to all parts of the world. The threat of the Chinese Communist party is apparent from the developments of border aggressions at the India - Tibet border, conflicts at the South China Sea, and war threats to Taiwan. With new trade deals, leading democratic countries of the world are fostering one of the world's worst threats to democracy. As a consequence, China has been advancing its influence and power to all parts of the world. It is high time for the leaders of the free world to stop their "quiet diplomacy" against China and move forward to protect democracy. China is a threat to democracy. If China continues to go on with its atrocities, the world is in danger of moving apart from democracy,” the five Tibetan NGOs warned.

“It has been more than 70 years since Tibet was colonised by China. Tibetans have never stopped struggling for their rights and freedom. Today, five major Tibetan NGOs are joining to organize a hunger strike to protest against the oppressive policies on Tibetans and reiterate that China does not qualify for the right to host the 2022 Winter Olympics in Beijing,” they said. “We are joining in solidarity with people all over the world who are also victims of Chinese colonisation like the Tibetans. Since the 2008 Beijing Olympics, 167 Tibetans have self-immolated to protest against the repressive Chinese occupation. The situation inside Tibet has been severely deteriorating,” the Tibetan NGOs explained.

“China has violated international laws, and ironically also failed to enforce the laws prescribed under the Chinese Communist Party's ethnic autonomy system. Tibetans inside Tibet are living under severe restrictions and repression. There are increased reports of arrests of dissents and enforced disappearance inside Tibet. The recent demolition of a giant Buddha statue in Draggo, Kham, and ten - year sentence of prominent Tibetan writer Go Sherab Gyatso is clear evidence. As such, we call on China to release, Tibetan political prisoners including Panchen Rinpoche immediately without any conditions,” the statement concluded.