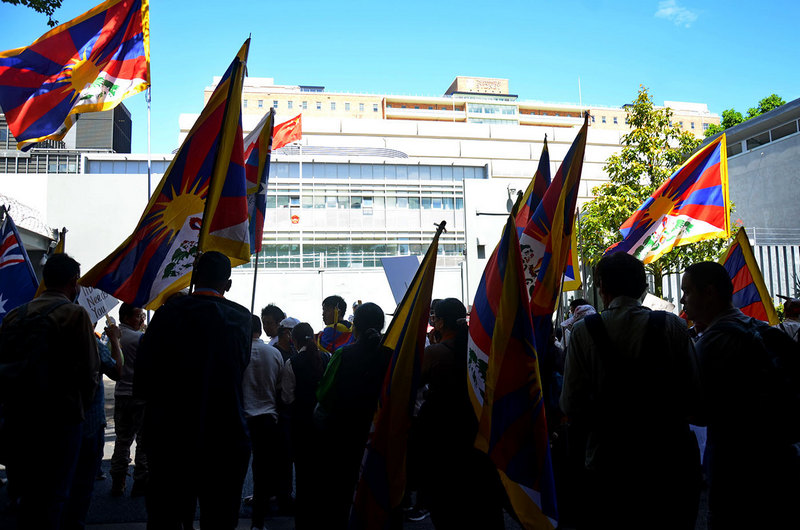 Sydney — 10 March 1959 National Uprising Day of Tibet was observed in Sydney on Thursday 10 March 2022. Following singing of both the national anthems of Tibet and Australia and a series of speeches delivered by event organising leaders, leading Chinese democracy activists,  Australian politicians and other community leaders.

Then the crowd of protesters marched through the CBD and along Broadway before arriving at Camperdown in front of the barbed wire fortress of the Chinese Consulate General in Sydney. By displaying the portrait of Tsewang Norbu throughout the event, the demonstrators remembered and paid tribute to the famous young singer who recently immolated himself in Lhasa, the capital of Tibet, for the just cause of Tibet.

The rally was jointly organised by the Sydney Tibetan Voluntary Group (STVG) and the Regional Tibetan Youth Congress Sydney (RTYCS). Several activists from Hong Kong, East Turkestan, Vietnam, Chinese pro-democracy groups along with Tibet supporters joined the rally. The crowd chanted prayers and shouted slogans that included "Save Tibet, free Tibet, we want freedom, China out of Tibet, wake up UNO, Australia supports us, world supports us, Tibet is burning and the world is watching, stop genocide in Tibet, free China, and No Chinese Communist Party".

While enjoying and praising today's good weather, Rev Bill Crews, a good friend of His Holiness the Dalai Lama, from Exodus Fundation  pointed to the water that had pooled in front of the assembled crowd, reflecting everyone and chanted "Long live the Dalai Lama" and "Long live the people of Tibet". He said, "I suppose when Putin invades Ukraine, he learned lessons from China when they invaded Tibet, when they took away your freedom and identity, but all they took away was the reflection in the water. That is all they took from you, because they didn't take away your culture and identity. They couldn't take any of it away from you, no matter how hard they tried. They can't, and they won't, but these will spread all over the world.

New South Wales MP and Greens member Jenny Leong criticised China's autocratic actions against the Tibetan people, drawing comparisons between the current situation in Tibet and that of aborigines long time ago. "If there is one thing the Tibetan people understand, it is the huge injustice that occurs when you are displaced from your own homeland. When other people invade you and take away your right to self-determination," Leong said.

She has clearly pointed out her party's strong historical stance on issues of Tibet. "You will hear later from my colleague Jamie Parker, who always also is a great representative and strong tradition of standing very closely with the people of Tibet, with Tibetans inside Tibet and the Tibetan community across this country and around the world," Leong said.

"I know that our best and our leader of the party, Bob Brown was a good friend of the Dalai Lama. I know that the Greens have stood in our federal and our state parliaments, calling for respect and autonomy for the people of Tibet. I also know that we support a Free Tibet where Tibetans have the rights to self determination. However, today is a special day because it marks the anniversary of an uprising. What we need is the recognition of basic human rights, justice and self-determination for the people inside Tibet," she added.

In his speech, New South Wales MP Jamie Parker, also from the Greens, expressed strong support for Tibet and the spiritual leader of Tibet. "I acknowledge His Holiness the Dalai Lama and pay my respects to his spiritual leadership for many decades to come and supporting a Free Tibet. Most importantly, I want to thank every single one of you," he stood in solidarity with the crowd.

"You are so important. Your presence here today sends a powerful message to the Australian government, to politicians, to policymakers in Australia that Australia is not doing enough and Australia can and must do more," Parker stressed his dissatisfaction with Australia's efforts to raise the issue of Tibet.

"Today, on 10 March, we acknowledge this particularly important day. This is the day that the Tibetan people rose up to struggle against the occupation of their land, and for 63 years the Tibetan people have not been silenced," he further added.

"Because we know that activities like this are basic human rights, like the right to assemble freely, which is a basic human right to buy and trade inside China. Freedom of expression and the opportunity for you to stand up here and express your political or religious views is almost impossible in China and, of course, in occupied Tibet," he said.

The Greens MP said that "the challenge for us as a nation, as Australia and for the international community, is to recognise that human rights must come first, not trade, not diplomacy, not money and power, but human rights, because our country picks and chooses which human rights it will stand up for and in which country. In some countries, such as occupied Tibet, we see the denial of freedom of expression, freedom of assembly, and the violation of land illegally. Australia should take a strong stand on Tibet, as it did on Afghanistan."

To show his support and solidarity with the people of Tibet, Prof Feng Chongyi of the UTS issued his personal statement, read by Ms Li Sun, strongly criticising the CCP for its ongoing atrocities against the people of Tibet with decades of failed policies while maintaining its 'wolf warrior diplomacy'. She called out "Free Tibet, Free Taiwan, Free Hong Kong and Free China" on behalf of Prof Feng.

Speaking at the rally, Australian human rights activist Bob Vinnicombe condemned the CCP for putting the Tibetan people in dire straits and stressed that the world should raise the value of human rights and pay more attention to the vulnerable groups, led by Tibet. "Tibet is one of the oppressed people under the one-party dictatorship of the CCP, which has usurped it by force since 1949, and Tibetans have suffered immeasurable human rights persecution to this day, and I look forward to international attention being turned to Tibet so that Tibetans can be free soon."

Pointing to the similar fate of Tibet and Ukraine, Bob said that 'what is happening in Ukraine today, the atrocities of Putin we seeing on TV every day, happened in Tibet 63 years ago, hidden from the world for decades. Tibetans and Ukrainians suffered invasion, destruction and murder. Tibet was a wonderful and huge country, bigger than Australia, in term of land size.'

'Australian policies have tried globalisation and economic rationalism, allowed the CCP to pile up Australian poverty, farmland, racehorses, dairies and even airports and flight schools. Look at how many Liberal and Labor MPs are present today at this important event, there are none,' he expressed his disappointment.

After a brief introduction to the Uprising Day, Jigme Dorjee, the President of the STVG said that the recent self-immolation of a famous Tibetan youth shows that the current situation is deteriorating and is very grim. "After 63 years of occupation and genocide committed by China, Tibetans inside Tibet still face a hellish situation in their own country. Therefore, it is the responsibility of all of us who live in free countries to bring and raise the real appeal and demand of all Tibetans in Tibet to the international community on their behalf."

"The rally here in Sydney is a public display of unity, to draw attention to the current plight of Tibetans who are trapped, voiceless, inside military-occupied Tibet, and to stand against the ongoing violations of basic human rights in our homeland and in East Turkestan, where the CCP has persecuted, and which continue unchallenged to this day," the joint statement said.

While expressing his gratitude to those present at the event and to those involved in the welfare and security, including members of the local police, Tsundu Oser, the RTYCS President gave a short speech. He called on the international community to wake up and urged world leaders to raise the issue of Tibet with China and support their struggle for the freedom of their people and their homeland.

"Today, 10 March, is the 63rd anniversary of Tibetan National Uprising Day, one of the most important days in the Tibetan calendar. On that day in 1959, thousands of Tibetans from all walks of life rose up against China's invasion and occupation of their country. The protests were followed by brutal crackdowns, which resulted in tens of thousands of lives," Oser said.

"Tibet's recent history has seen it illegally ruled and brutally oppressed by the CCP, but this has not brought the Tibetan people to their knees, on the contrary, they have become more and more courageous, never feared or retreated, and to this day there are Tibetans who are continuing to sacrifice their blood and lives to fight for the freedom cause of Tibet," he told the TPI.

Addressing the rally at Chinese Consulate General, Dr Jin Chin, President of the Federatopm for a Democracy China (FDC), said that "the CCP will not fall in the face of the resistance of the democracy movement and Tibet's freedom struggle, but will collapse with a bang amidst the changing international landscape.

'After that, China will have a political opportunity for the Tibetan people to achieve a high degree of autonomy, even independence. By the post-communist period, China will also be dismembered into pieces, and this will be the historical reality in the future," he added.

In the course of the last 70 decades, 'political repression, social discrimination, economic marginalisation, environmental destruction and cultural assimilation' have continued, particularly as a result of Chinese immigration into Tibet, fuelling intense resentment among the population of occupied Tibet.

To view the event-related image gallery on our social media page, click on the link below "Tibetan National Uprising Day in Sydney".