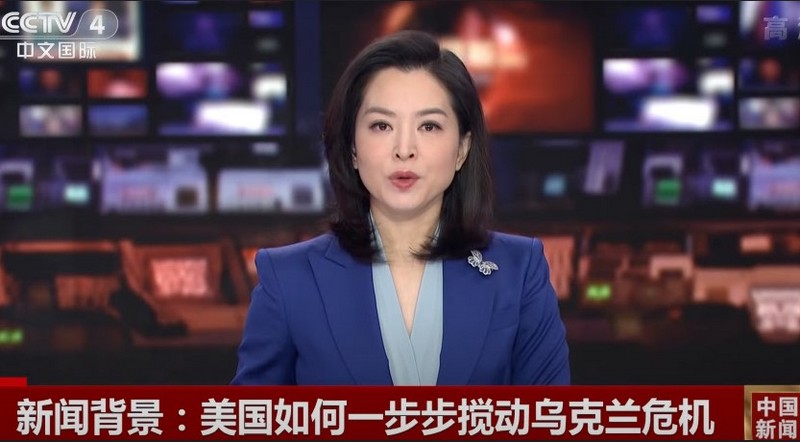 Translation of the news ticker by CCTV-4, broadcasting outside China: "Media background: How the US is stoking the Ukrainian crisis step by step". Photo: CCTV-4

Reporters Without Borders (RSF) has strongly condemned the amplification by the Chinese state media of Russian disinformation about the invasion of Ukraine.

The Paris-based international press freedom watchdog on Thursday (14 April 2022) called on the public to be informed by fact-based reports from only reliable, independent media sources.

Since the beginning of Russia's invasion of Ukraine on 24 February 2022, China has tried to appear neutral, but in doing so its state media have largely adopted the Kremlin's propaganda discourse by reproducing the wordings of the misleading, the watchdog said.

For example, the RSF said that the Chinese authoritarian media used the terms "special military operation" and "Ukrainian crisis" to describe the invasion, and implied that the US and NATO were actually responsible for the war.

"Russian disinformation on Ukraine has already reached intolerable heights and the last thing the world needs is the amplification of these lies by the Chinese propaganda machine," says Cedric Alviani, head of RSF's East Asia Bureau.

Alviani also urges the public to "disregard reports by media outlets controlled by authoritarian regimes" and to inform themselves "through fact-based reports issued by trusted independent media sources only".

In response to misleading reports about "US biological weapons" spread by the two authoritarian states, the RSF states, since 7 March, China's state-run CCTV and the official newspapers The People's Daily and Global Times have propagated the Russian government's claims about the United States funding and developing biological weapons in Ukraine.

Additionally, mirroring what happened in Tibet and East Turkestan in recent decades, the government-controlled media has obscured the ground reality in Ukraine, using terms such as "staged massacre" to describe the Bucharest massacre perpetrated by Russian dictator Putin.

"On at least two occasions between 4th April and 6th April, CCTV and Global Times also amplified unsubstantiated claims that Ukrainians staged the Bucha massacre, despite satellite evidence of the killing by Russian troops of at least 400 civilians,' the watchdog further said.

According to the RSF, Chinese state propaganda machines are also trying to deceive the public by promoting Putin's propaganda and spreading it in the same way to reinforce it. "In early March, the social media accounts of China’s international state broadcaster CGTN repeated Russian President Vladimir Putin’s unsubstantiated accusation that “Ukrainian “‘neo-nazis” opened fire on Chinese students”.

The press freedom advocacy group says that around 2,000 civilians and seven journalists have been killed in the country since the invasion of Ukraine began, and 11 others have been shot and injured. "On 11th March, RSF has opened a Press Freedom Centre in the city of Lviv that provides operational assistance to journalists reporting on the invasion," it added.

The country is the world's largest jailer of journalists, with at least 124 detainees, and ranks 177th out of 180 countries in RSF's world press freedom index.

TPI Managing Editor Yangchen Dolma says that "these developments are rivalling the facts that the Chinese government is two-faced in its stance on Russia's invasion of Ukraine on the international stage and in its response to the same issue, while reproducing and spreading the terms of Russian propaganda in its own propaganda machines, misleading its audience overseas and promoting anti-Western Semitism among its citizens."