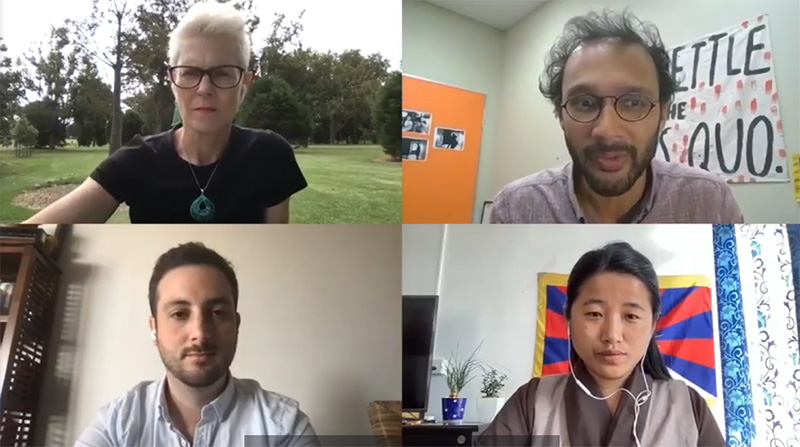 Speakers were Namgyal Dolkar and Tenzing Phuntsok Doring, members of the Tibetan Parliament-in-Exile, and Penny Allman Payne and Stephen Bates, members of the Australian Greens.

Dharamshala — “ The colonisation of Tibet is not history, it is happening right now; we are going through it now and we are hoping that the international community who loves freedom and human rights, will take a look at us and support us to challenge the dictatorial regime,” said Namgyal Dolkar, the Tibetan MP, while speaking on the topic of “Truth beyond propaganda and speak up for Tibet”.

The Tibet Festival Forum, presented by Brisbane Powerhouse in collaboration with Tenzin Choegyal and Perfect Potion, was held from 1 to 15 April 2022. As part of this virtual event, the Tibet Festival Forum organised a talk on "Truth Beyond Propaganda and Speaking for Tibet" on April 14, 2022.

The keynote speakers were Lhagyari Namgyal Dolkar and Tenzing Phuntsok Doring, members of the Tibetan Parliament-in-Exile, and Penny Allman Payne and Stephen Bates, members of the Australian Greens. The forum, which focused on the following themes, how can Australia better support the plight of Tibet?, what should the Australian government do to oppose the Chinese government's oppression of the Tibetan people?, was moderated by Councillor Jonathan Sri of Brisbane City Council. The event, which was attended by people from all walks of life around the world, served as a reminder of the Chinese government's human rights abuses against Tibetans.

The session started by acknowledging the aboriginals in Australia by the Australian members. At the event, Namgyal Dolkar said, “As an elected member of Tibetan people-in-exile and as an activist, this is something that I have been trying to speak about, to let the people know about the authoritarian regime (CCP), the Tibetan people is living under. China’s authoritarian government under Xi Jinping systematically represses fundamental rights and has become so much more intolerant of any sectors of the Tibetan society and individuals who they find threatening to their authority.

She added, “Thus, Tibetans literally pay a very heavy price with their lives for peacefully expressing their views. Any expression of Tibetan identity is labelled as "reactionary" or "splittist" and "criminal activity" and is therefore considered a threat to national security. During the peaceful protests for Tibet, we heard a continuous call for Tibetan freedom, the return of His Holiness the Dalai Lama, Tibet belongs to the Tibetans, freedom of religion. But despite the growing and intensified training, Tibetans inside Tibet are continuing to take bold steps in national identity and defending our basic human rights.” She cited the peaceful protesting methods like writing poems or practicing their religious beliefs as examples.

The host then asked what the effects of the Tibetan flag being displayed in Tibet were in terms of the government's reaction. Namgyal replied, "Imprisonment and torture". She then explained that this was the common fate of any Tibetan who dared to speak out against the Chinese regime. She explained that the differential treatment extended not only to Tibetans who spoke out (or self-immolated) but also to their families, who were deprived of all the benefits the Chinese government would otherwise have given them.

Sri also asked what kind of political structure the Tibetans are adopting, Namgyal was very clear on his position: "The Tibetan government in exile - we are asking for genuine autonomy within the Chinese constitution, but we have to recognise that there are huge populations of Tibetans who are also asking for independence for Tibet. If you look at the people who have self-immolated, setting fire to their lives, they were demanding a free Tibet." She added that it was important to take all these voices into consideration.

In an attempt by the Australian community to better understand the self-immolation protests, Namgyal was asked about the history and motivations of self-immolation. She replied: 'Self-immolation is the greatest sacrifice of one's life for one's nation and people. Just a week ago, on March 27, 2022, we received confirmed reports that an 81-year-old Tibetan man, Taphun, set himself on fire to protest against the Chinese regime. Since 2009, there are 157 confirmed cases of Tibetans who have set themselves on fire, including 131 men and 26 women. Of these 157 people, 137 are under 30 years old."

"We had a very famous Tibetan singer called Tsewang Norbu, who was 25 years old, who was very open in public, who sang about the unity of Tibetans, who sang about our culture and our identity, and who was very successful in singing, but he chose to immolate himself to protest against China. I think there are so many people, sceptical people who choose to call that a suicide, but I always said it was the highest form of non-violent protest in Tibet," she added.

The MP added, “The colonisation of Tibet is not history, it is happening right now; we are going through it now and we are hoping that the international community who loves freedom and human rights, will take a look at us and support us to challenge the dictatorial regime.”

Penny and Stephen elaborated on the Greens' position on the issue of Tibetan autonomy. The Greens confirmed their commitment to social justice and democracy. She said they had four demands of the Chinese and Australian governments: on China, they called for an immediate response to the gross violations of human rights in that country and insisted that human rights activists and journalists be given free access to Tibet and that travel restrictions on Tibetans be lifted. The Australian government is being asked to take targeted sanctions against China and to boycott the Beijing Olympics. Stephen added that justice and the fight for human rights should not be selective and therefore support for Tibetans is absolutely important given China's influence.

After thanking the Australian Greens, Namgyal spoke of the forms of pressure and activism that the international community can put on China. She said, "We need to know that the Chinese Communist Party has a confident face. But they are also very sceptical. They are eager to display their superiority as a Han race. But they are increasingly afraid of being excluded by the world and failing as an economy."

She added that she believed in Australia's commitment to democracy and equality and could therefore help the Tibetans. She cited the opposition to the memorandum of understanding signed on the Belt and Road Initiative and the ban on telecoms giant Huawei as positive steps. She noted that these steps were important because, "China is developing telecommunications and its mass media to create this notion and spread the propaganda of the Chinese government. These telecommunications have allowed the Chinese government to reinforce the rules in the occupied region and China as a whole."

Speaking about the ecological degradation of the Tibetan plateau, Namgyal said, "Make Tibet the focus of any discussion on climate change. I think this is a very important issue right now, because Tibet has the third-largest concentration of ice after the South and North Poles. And its protection from man-made disasters, especially the CCP, is crucial. What is happening now is that even if we talk about global climate change or environmental destruction, I think the mention of Tibet has become political and offensive to the CCP. I think this self-censorship is dangerous. More than what China is doing, it is the way we censor ourselves from mentioning the truth that is the real problem right now in this geopolitical scenario." She expressed hope that the word Tibet would be heard more often and that their struggles would be heard around the world.

Tenzing Phuntsok Doring said, "As many people know, Tibetans inside are voiceless. Freedom of expression has been restricted by the Chinese government since it invaded Tibet in 1959. The violation of human rights that is taking place in Tibet cannot be remedied if we cannot speak out." He spoke of his own and Namgyal's past, where their families suffered and so this struggle is generational and continues as a legacy.

Phuntsok also spoke about how Australia should handle China's sponsorship of education and development. He said, "China is well known for offering something conditionally, all the time. As far as I know, this applies to Australia as well.” He urged the Australian community to be aware of the compromises that such agreements may involve before committing to them.

At the end of the event, the MPs declared that despite psychological colonisation and sinicisation, they will remain proud of their identity and continue to struggle. They concluded by expressing their faith in the international community's ethos of justice and human rights.