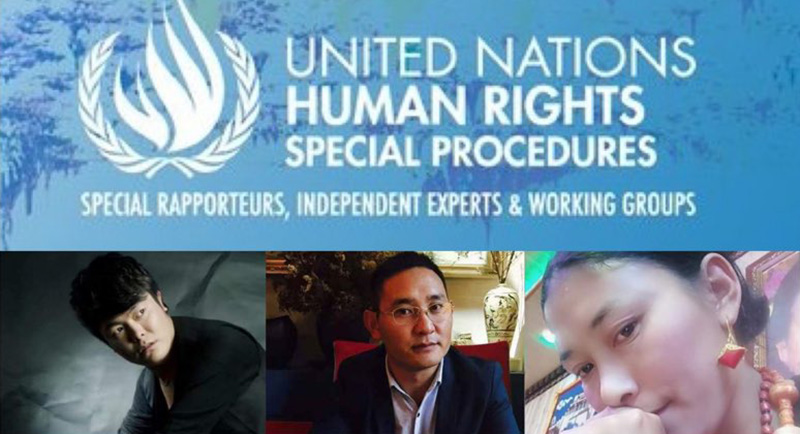 Dharamshala, India — Six UN human rights bodies have raised the cases of three detained Tibetans, singer Lhundrup Drakpa, writer Lobsang Lhundup (Dhi Lhaden), and teacher Rinchen Kyi with the Chinese government, and urged China to provide information concerning the legal grounds for the arrest, detention and conviction of them and how these charges are compatible with international human rights norms and standards.

“We have received regarding the arrest, detention and subsequent enforced disappearance of Tibetan writer Mr Lobsang Lhundup (pen name of Dhi Lhaden), musician Mr Lhundrup Drakpa, and teacher Ms Rinchen Kyi, allegedly in connection with their cultural activities in favour of the Tibetan minority language and culture,” the joint letter mentioned.

The Tibetan singer, Lhundrub Dakpa arrested in May 2019, in the so-called Tibet Autonomous Region (TAR), just two months after the release of his new song "Black Hat" (Tibetan: Shamo Nagpo) for singing Tibetan songs opposing China's repressive policies and oppression in Tibet. For over a year, Dakpa was arbitrarily detained and subjected to torture, including severe beatings and harsh interrogations. In June 2020, a Chinese TAR court sentenced Dakpa to six years in prison for "separatist activities".

He is from Driru County in Nagchu, eastern Tibet. Dakpa, along with another popular Tibetan singer, sang in 2013 and released a video entitled: Rise up auspicious (Tibetan: Tashi Yardo) which mentions prayers for the long life of His Holiness the Dalai Lama.

The Tibetan writer Thubten Lobsang Lhundup (Dhi Lhaden) was arrested by Chinese authorities in June 2019 in Chengdu city, Sichuan Province, and has been detained for the past two years. He was sentenced to four years in prison later 2021, on charges of "disrupting social order". Further information, including the date of the sentence, the name of the court, and the place where he was imprisoned are unknown.

Since 2008, he has been visiting various parts of Tibet to experience and record observations for his book, Tse Sok Le Trun Pe Kecha. Lhaden released his first book in the Tibetan language titled Tse Sok Le Trun Pe Kecha (Words Uttered with Life at Risk) in 2011. He has spent more than three years carefully writing this book about his observations and arguments about the causes and consequences of the massive Tibetan uprising in 2008. The 255-page book is divided into five chapters and also includes commentary on the Jekundo (Yushu) earthquake. The first chapter of the book is devoted to the 2008 Mass Uprising in Tibet, including a timeline of the protests, their causes, scope, repression, analysis by Chinese scholars, police brutality, and Chinese government propaganda against His Holiness the Dalai Lama.

The Tibetan teacher Rinchen Kyi was arrested in August 2021, after she went on hunger strike to protest against the forced closure of the Sengdruk Taktse Middle School in Darlag County, Golog, in the traditional Tibetan province of Amdo Region, in July 2021. Rinchen Kyi was reportedly taken to a hospital in Xining, the capital of Qinghai province, but was not diagnosed with any health problems. When her family heard the news and rushed to the hospital, she had already been transferred to an unknown location. Her condition and whereabouts have remained unknown since then.

“Serious concern is expressed that the alleged arbitrary arrest, detention and enforced disappearance of Mr Lobsang Lhundup, Mr Lhundrup Drakpa and Ms Rinchen Kyi may be linked to the legitimate exercise of their freedom of opinion and expression, which includes artistic expression, and freedom to take part in cultural life, as well as their rights, as a members of an ethnic, religious and linguistic minority, to enjoy their culture, practice their religion and use their language with other members of their community. Further concerns are expressed for their physical well-being,’’ the joint letter stated.

“We also express serious concern about what is reported as a trend of repressive actions, including arrests and prolonged detention, some in incommunicado situations, against a larger number of Tibetans engaged in the promotion of the Tibetan culture, including through education, or who are critical of the Chinese rule in Tibet,” they said.

“Without expressing at this stage an opinion on the facts of this case and on whether the arrest and detention of Mr Lobsang Lhundup, Mr Lhundrup Drakpa and Ms Rinchen Kyi are arbitrary or not, we would like to appeal to your Excellency's Government (Chinese government) to take all necessary measures to guarantee their right not to be deprived arbitrarily of liberty and to fair proceedings before an independent and impartial tribunal, in accordance with articles 9, 10 and 11 of the Universal Declaration of Human Rights,” the human rights bodies urged.

“We are issuing this appeal in order to safeguard the rights of Mr Lhundup, Mr Drakpa and Ms Kyi from irreparable harm and without prejudicing any eventual legal determination,” it said.

The UN Human Rights bodies urged Chinese government to provide information concerning the legal grounds for the arrest, detention and conviction of Mr. Lobsang Lhundup, and how these measures are compatible with international human rights norms and standards.

They also urged China to provide information concerning the legal grounds for the arrest, detention and conviction of Mr. Lhundrup Drakpa, and how these charges are compatible with international human rights norms and standards.

The UN Human Rights bodies further asked the Chinese government to explain the legal grounds for the arrest and detention of Ms Rinchen Kyi, and how the charges of "inciting separatism" are interpreted in this case and compatible with international human rights norms and standards.

They also urged the Chinese government to provide information on the fate, health status and whereabouts of Lhunrup Drakpa and Rinchen Kyi and information about the reasons why their place of detention was not shared with their respective families and representatives.

They further urged China to provide information about the status of the legal process of Ms Rinchen Kyi, including details about her expected trial location and dates and her access to a legal representation of her choice.