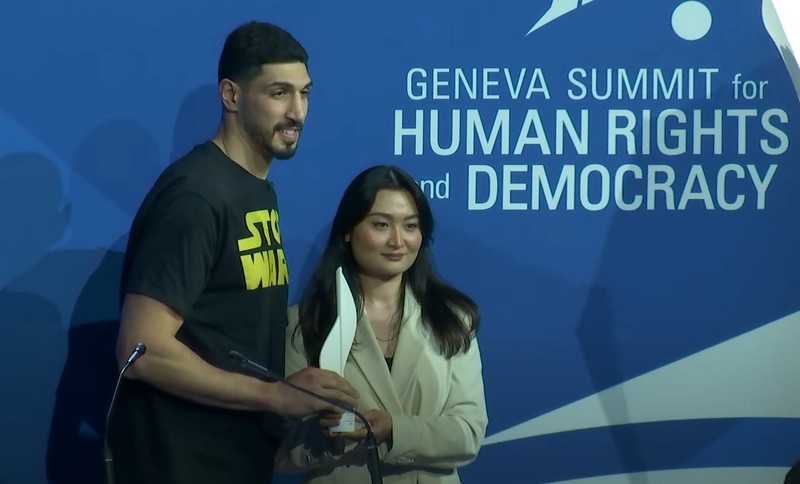 Enes Canter Freedom, an internationally renowned basketball player of Turkish origin, has been awarded the Courage Award of the Geneva Summit 2022 in recognition of his courageous efforts and outstanding contribution to the values and principles of democracy.

A cross-regional coalition of twenty-five human rights organisations has awarded the athlete and NBA activist a prestigious international award for his defence of human rights in Tibet, East Turkestan (Xinjiang) and Hong Kong this year, despite the risk of his career ending for speaking out against Chinese government abuses.

While his courage was unanimously recognised by international human rights organisations, Freedom accepted the award on behalf of human rights defenders worldwide on 6 April, 2022.

Speaking to the media, Kanter Freedom said that the Chinese regime is a brutal dictatorship and he hopes his campaign will serve as a warning and bring global attention to human rights abuses in China. He also called for more athletes to take a stand for justice and speak out for human rights.

For over a decade, Kanter has been speaking out against the dictatorial atrocities in his home country of Turkey, which has led him to focus on the dictatorial atrocities of the Chinese government. After gaining insight into the grave human rights violations in Tibet, Xinjiang and Hong Kong, he joined the ranks of solidarity and became an outspoken human rights activist.

In October 2021, before the start of the first round of the new NBA season, Kanter tweeted a message to Chinese President Xi Jinping calling on him to give freedom to Tibet. wearing a black t-shirt with a picture of His Holiness the Dalai Lama, Kanter said, "Tibet belongs to the Tibetan people."

He stressed that there are more than 5,000 political prisoners in Tibet and that any Tibetan with a picture of His Holiness the Dalai Lama would be arrested. He wore sneakers with the Tibetan national flag and the words "Free Tibet" during the tournament, and then this tournament was suddenly cancelled by the Chinese authorities from being broadcast on Chinese media.

When Kanter became a US citizen in November 2021, he changed his surname to "Freedom" and has since undertaken the role of spokesperson for all oppressed people in China and other dictatorial countries around the world.

This was followed by separate messages of appreciation from the Cabinet of the Central Tibetan Administration (CTA) and the Tibetan Parliament-in-Exile  (TPiE) to Enes Kanter Freedom, emphasising the significance of influential people showing solidarity with Tibet in drawing more attention, sympathy and support to the tragic fate of Tibet.

When Kanter Freedom was awarded the Geneva Summit Courage Award in February this year, he shared his feelings to the media about the award, expressing his respect for His Holiness the Dalai Lama, saying that His Holiness has always inspired him to fight for freedom, human rights and truth, and stressing that if world leaders listened to His Holiness the Dalai Lama's message, there would be no war in the world. On the issue of Tibet, he said: "What is occurring in Tibet is cultural genocide, China needs to recognise Tibet belongs to the Tibetan people. "

Kanter stated that after he raised his voice in support of Tibet, his tournament was stopped by the Chinese government from being broadcast live within China, which clearly revealed "how much they (Chinese authorities) are scared off".

According to the CTA website, Chhimey Rigzen, representative of the CTA office in Geneva, attended the award ceremony and on behalf of the CTA, presented Ines Kanter Freedom with a traditional Tibetan Khata (white scarf) and thanked him for his support of Tibet and who have been forcibly oppressed by the dictatorship.