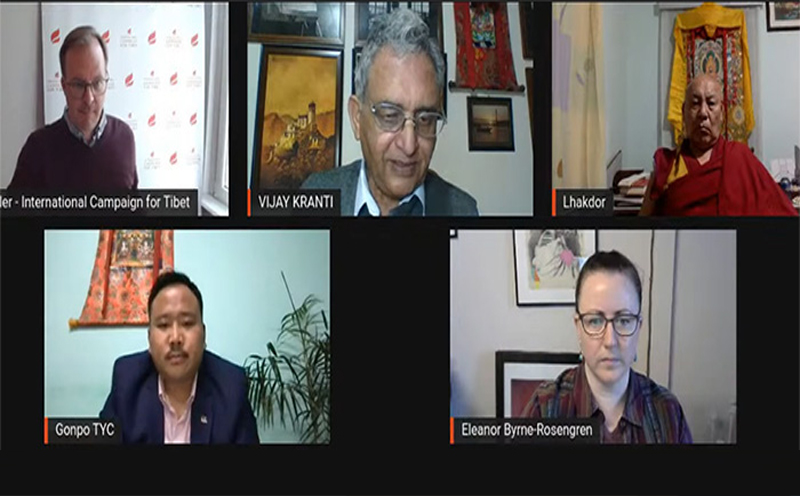 New Delhi — A group of international experts on Tibet and China had a common observation that the Chinese government’s act of arresting the six-year-old Panchen Lama of Tibet and keeping information about him as a well-guarded state secret for past 27 years has exposed the failure of their policies and seven-decade long colonial rule over Tibet. It is therefore not surprising that China’s failure in making Tibetan people to accept their fake Panchen Lama has emerged as the embodiment of the failure of the Chinese Communist Party policies and its rule over Tibet.

These experts from Britain, Germany, India, and Tibet were participating in an international webinar last night. It was organised by the Centre for Himalayan Asia Studies and Engagement (CHASE) and Tibetan Youth Congress (TYC) to mark the 33rd birth anniversary of Gedhun Choekyi Nyima, who was identified as the 11th reincarnation of Panchen Lama in Tibet in 1995. The six-year-old boy was soon arrested by the Chinese government because the search team of the Tibetan monks had taken the approval of the exiled Dalai Lama for this child as the real incarnation. The Chinese rulers of Tibet enthroned another five-year-old boy Gianchin (Tib: Gyaltsen) Norbu as the ‘real’ incarnation of the 10th Panchen Lama. Since then Beijing has refused to divulge any information about the safety or whereabouts of Gedhun despite repeated requests from many world governments, the European Union, and leading human rights groups from across the world.

In the Tibetan system, the Dalai Lama is considered as the supreme ruler and spiritual head of Tibet. But Panchen Lama’s position is second to him in spiritual matters and both function as each other’s teachers following each other’s reincarnation. The 10th Panchen Lama, who was initially under the control of China soon after the Dalai Lama escaped to India, later became highly critical of Chairman Mao and his Communist Party rule in Tibet for their atrocities over the Tibetan people. Following his 14 yearlong incarcerations in Chinese jail and labour camps, he was rehabilitated. But soon after he suddenly died under mysterious circumstances in 1989 after he publicly criticized China’s inhuman treatment of Tibetan people.

Kai Mueller, an international jurist and Executive Director of International Campaign for Tibet in Berlin, said that although China has been trying hard to establish the legitimacy of its rule over Tibet by making high claims like ‘liberation’ and ‘development’ of Tibet, yet the Chinese leadership looks so miserable that they don’t have the courage to even share right information about a child who is living under their captivity for past 27 years.

Kai Mueller pointed out some paradoxes in the behavior of Communist Chinese rulers of Tibet. One is that despite being atheists and holding deep contempt for religion, they are still over-enthusiastic about delving deep into Tibet’s religious practices like searching out a reincarnation and enthroning religious leaders like the Panchen Lama. “In order to put this policy into practice, they have only exposed their helplessness and fear from a small child. But their attempts of imposing a fake ‘Panchen Lama’ over the Tibetan people and making all efforts to win the endorsement of ordinary Tibetan people in favor of their puppet have failed miserably. It is, therefore, no surprise that China’s fake Panchen Lama has emerged as the embodiment of the failure of the Chinese Communist Party and its rule in Tibet”, he said.

Geshe Lhakdor, a Tibetan Buddhist scholar of international repute and Director of Library of Tibetan Works and Archives in Dharamshala, expressed deep concerns over Communist China’s attempts to establish itself as the leader of the Buddhist world by organising a series of what it calls ‘World Buddhist Conferences’ since 2006. “They spend huge money by inviting Buddhist leaders and scholars from across the world but they never invite His Holiness the Dalai Lama. Through such conferences, they have been desperately trying to establish Gianchin Norbu, their puppet Panchen Lama, as the most senior world Buddhist leader. But they have failed completely in this attempt,” he said.

The monk scholar warned the Chinese leaders against their acts of mistreating and killing monks and ordinary Tibetans. “If you treat ordinary people then it is a great sin. But if you even mistreat the Bodhisattvas like the Panchen Lama then the consequences will be too serious for China, Chinese leaders, and the Communist Party of China. In Buddhism, it is called the law of causality. In simple language, it is the law of nature. No one will be able to save those individuals, who are involved in such sins,” he warned. Offering his prayers for the long life of the arrested Panchen Lama, Geshe Lhakdor said, “No matter even if he is alive or not, he, like other Bodhisattvas, will keep working. And the impact will be very serious for China.”

Ms Eleanor Byrne-Rosengren, member of the Steering Committee of International Tibet Network (ITN) in the UK, ridiculed the Chinese government for its claims that they had taken away the six-year-old Gedhun ‘for his personal safety. “If they were genuinely interested in ensuring his safety then 27 years is a too long time for a powerful government like today’s China to keep him hidden from the eyes of the world. Their failure to share information about the Panchen Lama only exposes the fears of the Chinese government,” she said.

Eleanor told the audience that her organisation has been taking the help of some leading artists and scientific techniques related to ‘age progression image creation’. Using this technique ITN has been creating the probable current image of the Panchen Lama over the past years and sharing them with government, parliaments, opinion makers, and human rights activist groups across the world. Hoping that the Panchen Lama is still alive and safe under Chinese captivity she declared that ITN and other organisations involved in promoting awareness about Tibet will continue putting pressure on the Chinese government to release the Panchen Lama.

Vijay Kranti, a veteran Tibetologist and Chairman of CHASE moderated the discussion. Presenting a background to the subject, he said that in the earlier four decades of Tibet’s occupation the Chinese rulers hoped that by destroying Tibetan culture and banning religious practices they would be able to convert ordinary Tibetans into patriotic Chinese. But after realising that even three generations after Dalai Lama left Tibet, the Tibetan people’s faith in him and Buddhism remain a uniting and driving force against the Chinese rule, they are now trying to occupy the Tibetan Buddhism from within. Imposing a Panchen Lama of the CCP’s choice is an example of this frustration of Beijing leadership.

In his vote of thanks, Gonpo Dhundup, President of TYC reiterated the resolve of his organisation and Tibetan people to keep working towards regaining freedom and independence of entire Tibet from the colonial rule of China.