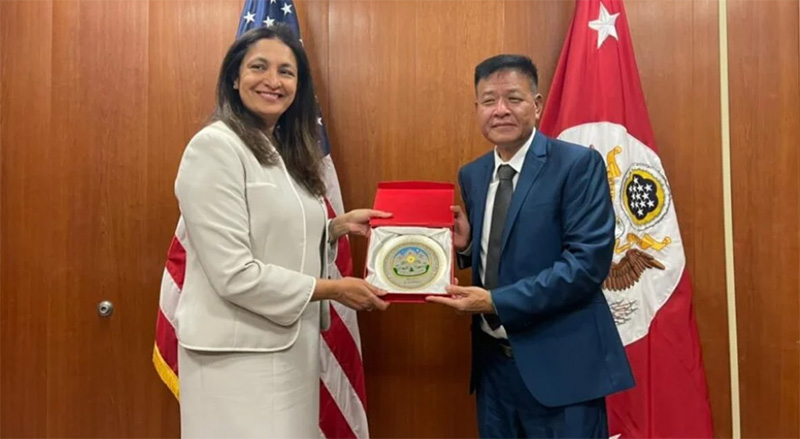 Sikyong (President) of the Central Tibetan Administration with US Under Secretary Uzra Zeya on April 25, 2022. Photo: Tibet Office in Washington DC.

Washington D.C. — Sikyong (President) of the Central Tibetan Administration, on a visit to the United States, raised Tibetan issues and asked for support to resolve the Sino-Tibetan conflict. He said, “The bipartisan US commitment and global leadership in supporting the Tibet cause is a source of great hope for Tibetans in Tibet and outside and will always be remembered.”

Before traveling to the United States, the Tibetan delegation visited the city of Frankfurt, Germany on April 22, 2022, where they met with Tibetans and gave speeches. The visit to Germany included a meeting with the German press and a roundtable discussion. Sikyong left for Washington, D.C. on April 24, 2022.

On Monday, April 25, 2022, Sikyong Penpa Tsering of CTA paid a courtesy call on the US Special Coordinator for Tibet, Uzra Zeya, upon his arrival in the US. The visit, which coincided with the 33rd birth anniversary of the 11th Panchen Lama of Tibet, was accompanied by the representative, Dr Namgyal Choedup, of the Tibet Office in Washington DC, and Abbot Zeekyab Rinpoche of Tashi Lhunpo Monastery.

In regards to the meeting, Sikyong Penpa Tsering tweeted, “It was an honour meeting @UnderSecStateJ, during which we discussed ways to collectivize our efforts to bring concrete results in resolving the Sino-Tibet conflict through dialogue. We remain committed to the Middle Way Approach.” He added, “The bi-partisan US commitment and global leadership in supporting the Tibet cause is a source of great hope for Tibetans in Tibet and outside and will always be remembered.”

“Honored to meet with the CTA @SikyongPTsering today. I reaffirmed U.S. commitment to preserving Tibet’s religious, cultural, and linguistic heritage; advancing human rights for Tibetans in the PRC; and supporting the international Tibetan diaspora,” US Under Secretary Uzra Zeya tweeted, highlighting the commitment of the US to the Tibetan issue.

The delegation asked the special coordinator to contribute to the early resolution of the Sino-Tibetan conflict and the early return of His Holiness the Dalai Lama to Tibet. The meeting also focused on the effective implementation of the bill "HR 1646", which calls for the U.S. ambassador to China to meet with the long-lost Panchen Lama of Tibet and give him awards to have his religious rights recognized.