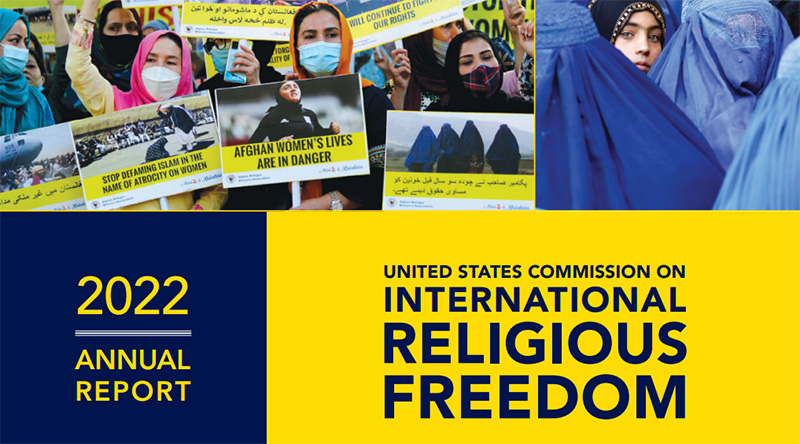 Washington, D.C — US Commission on International Religious Freedom released its 2022 annual report, on April 25, 2022, and said “In 2021, religious freedom conditions in China deteriorated. The government continued to vigorously implement its “sinicization of religion” policy and demand that religious groups and adherents support the Chinese Communist Party’s (CCP) rule and ideology.”

“The Chinese government continued its pervasive control and suppression of Tibetan Buddhism. In May, it issued a white paper on Tibet that included an emphasis on sinicizing religion there,” the report stated. “China pervasively tries to control and suppress various religious groups as it seeks to sinicize perceived foreign religions and crackdown on religious beliefs and actors viewed as incompatible with Communist Party ideology,” the report.

“The CCP, whose members are banned from believing in or practicing any faith, has long repressed religious freedom, and in recent years it has become increasingly hostile toward religion, implementing campaigns to “sinicize” Islam, Tibetan Buddhism, and Christianity to rid them of alleged “foreign” influences. These policies require religious groups to support CCP rule and its political objectives, including by altering their religious teachings to conform to CCP ideology and policy. Both registered and unregistered religious groups and individuals who run afoul of the CCP face harassment, detention, arrest, imprisonment, and other abuses,” the report mentioned.

Through the Religious Prisoners of Conscience (RPOC) Project, USCIRF seeks to raise awareness of individuals imprisoned for their religion or belief, reduce their numbers, and highlight the religious freedom conditions in their country of imprisonment.

Current RPOCs, there are 18 lists of individuals, including Gedhun Choekyi Nyima, the 11th Panchen Lama of Tibet, from eight countries around the world, for whom USCIRF Commissioners are advocating, are only a fraction of the many individuals who have been unjustly imprisoned for their religious beliefs, actions, and/or advocacy.

Recommendations to the U.S. government

• Redesignate China as a “country of particular concern,” or CPC, for engaging in systematic, ongoing, and egregious violations of religious freedom, as defined by the International Religious Freedom Act (IRFA);

• Work with like-minded countries in international fora, including the United Nations (UN) Human Rights Council, to collectively hold the Chinese government accountable for severe religious freedom violations, including by creating a UN Commission of Inquiry to investigate and identify perpetrators of genocide and other atrocity crimes in Xinjiang and document other severe human rights abuses throughout China; and

• Enforce China-related human rights legislation to ensure that U.S. companies do not contribute to religious freedom violations in China. The U.S. Congress should:

• Work with the administration to ensure that China-related human rights legislation, such as the Uyghur Forced Labor Prevention Act and Tibet Policy and Support Act, are fully enforced.