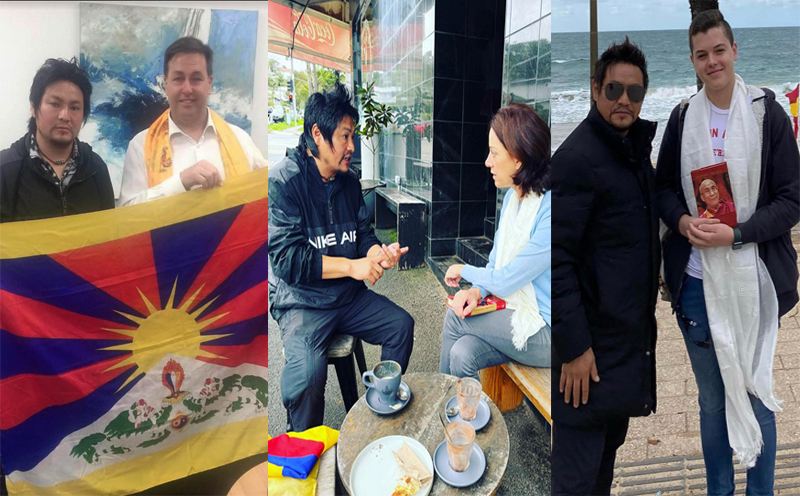 With the Australian election now entering a decisive phase, in order to gain more support for Tibetan issues in the new federal government and parliament, Tibetan activist Tsundu Oser was recently received by some of the federal parliamentary candidates for Mackellar to discuss the situation in Tibet, which is of mutual concern, and they unanimously pledged to continue to speak out for Tibet after their election.

From late April to this week, Tsundu Oser, President of the Regional Tibetan Youth Congress in Sydney and a senior member of the Tibetan Volunteer Committee, met with Liberal MP Jason Falinski, independent candidate Dr Sophie Scamps, and Greens candidate Ethan Hrnjak for Mackellar on the Northern Beaches of Sydney.

Tsundu stated that he met with Jason Falinski at his office in Narrabeen on 21 April. When asked by Jason about the challenges facing Tibet and Tibetans, Tsundu described the current critical situation in Tibet, referring primarily to the illegal invasion of Tibet by the Chinese Communist Party and its rule to date, the massive destruction of many religious sites and ecological environments in Tibet, including monasteries, and the serious violations of Tibetans' religious beliefs, language and culture, and human rights. He stressed that there is no freedom for Tibetans and that 167 Tibetans have so far self-immolated in protest against the Chinese government's oppressive policies in Tibet, which he said was the main purpose of his visit, and asked MP Jason to seek justice for Tibet and help release imprisoned Tibetan political prisoners, led by the second-largest religious leader in Tibet, the Panchen Lama.

Jason MP expressed concern about the violations and persecution of Tibetans in Tibet by the Chinese Communist Party, stressing that Australia is a country that protects the rights and freedoms of individuals. "Jason also posted their conversation on his YouTube channel on May 10.

On 30 April, Tsundu met with Dr Sophie Scamps, an independent candidate for the Australian Federal Parliament for Mackellar, and briefed her on the current situation in Tibet.

While expressing her concern for Tibet, Dr Sophie sought to learn about the issues involved with the Tibetan community in Mackellar. She also shared her feelings about the meeting on her Facebook page.

On May 10, Tsundu met with environmental activist Ethan Hrnjak, who is the Green Party candidate for Mackellar.

Tsundu indicated that despite his young age, Ethan is a very strong political figure and he has always been very concerned about Tibet and expressed his support for it on Facebook and Twitter. During this meeting, Ethan expressed that he would be actively involved in Tibet-related activities in the future.

Sharing the meeting on his Facebook page, Ethan also praised Tsundu for his efforts on behalf of Tibet over the decades and called him a Tibetan freedom fighter.

"We spoke at length about the strong relationship between The Greens and the Tibetan community, which started when Senator Bob Brown met with His Holiness the Dalai Lama after then PM John Howard refused to do so", Ethan stated.

"The Greens will always speak out against the treatment of Tibetans by China and if elected, I will use my platform to do the same", Ethan added.

Tsundu mentioned that during their meetings he had presented each of them with a copy of His Holiness the Dalai Lama's book "Lighting The Path - The Dalai Lama teaches on wisdom and compassion "They were particularly pleased with this.

Tsundu Oser, President of the Regional Tibetan Youth Congress in Sydney concluded that the meeting with the three high-profile candidates was a valuable motivation for gaining more pro-Tibet MPs in the Australian Parliament in the future.