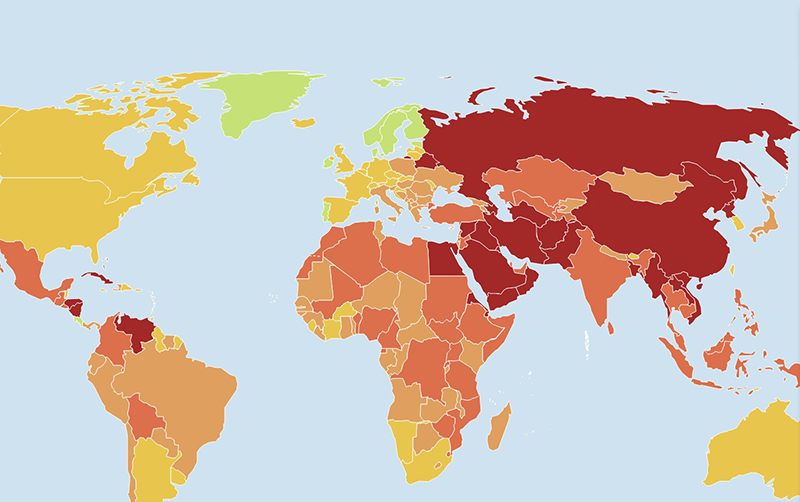 China has been placed among the worst countries and ranked 175th out of a total of 180 nations in Reporters Without Borders (RSF) World Press Freedom Index 2022, and has been warned by the renowned world press freedom watchdog that China belongs among the most repressive autocratic regimes in the world.

"China (175th), one of the world’s most repressive autocratic regimes, uses its legislative arsenal to confine its population and cut it off from the rest of the world, especially the population of Hong Kong (148th), which has plummeted in the Index," RSF declared upon the release of this year's index.

The RSF published its "2022 World Press Freedom Index: a new era of polarisation" on Tuesday 3 May 2022 to coincide with World Press Freedom Day and evaluates the state of journalism in 180 countries and territories around the world.
The annual report states that "the invasion of Ukraine (106th) by Russia (155th) at the end of February reflects this process, as the physical conflict was preceded by a propaganda war".

"The situation is classified as “very bad” in a record number of 28 countries in this year’s Index, while 12 countries, including Belarus (153rd) and Russia (155th), are on the Index’s red list (indicating “very bad” press freedom situations) on the map," the report reads.

The report says that China continues to expand its model of information control not only within its borders, but also beyond them. For example, the semi-autonomous region of Hong Kong, now controlled by Beijing, recorded the steepest drop in the 2022 index.

"Confrontation between “blocs” is growing, as seen between... India (150th) and Pakistan (157th). The lack of press freedom in the Middle East continues to impact the conflict between Israel (86th), Palestine (170th) and the Arab states."

The watchdog stated that polarisation of the media fuels and intensifies internal social divisions in "democratic societies" such as the US (42nd), notwithstanding the election of President Joe Biden. Heightened "social and political tensions" have been fuelled by "social media" and new media discourses, most notably in France (26th).

"The suppression of independent media is contributing to a sharp polarisation in “illiberal democracies” such as Poland (66th), where the authorities have consolidated their control over public broadcasting and their strategy of “re-Polonising” the privately-owned media," it adds.

"Margarita Simonyan, the Editor in Chief of RT (the former Russia Today), revealed what she really thinks in a Russia One TV broadcast when she said, ‘no great nation can exist without control over information," said Christophe Deloire, RSF Secretary-General.

He also added that "the creation of media weaponry in authoritarian countries eliminates their citizens’ right to information but is also linked to the rise in international tension, which can lead to the worst kind of wars. Domestically, the ‘Fox News nation of the media poses a fatal danger for democracies because it undermines the basis of civil harmony and tolerant public debate. Urgent decisions are needed in response to these issues, promoting a New Deal for Journalism, as proposed by the Forum on Information and Democracy, and adopting an appropriate legal framework, with a system to protect democratic online information spaces.”

Working with a committee of seven experts from the academic and media sectors, RSF developed a "new methodology for compiling" the 20th World Press Freedom Index. The RSF says the new methodology defines press freedom as “the effective possibility for journalists, as individuals and as groups, to select, produce and disseminate news and information in the public interest, independently from political, economic, legal and social interference, and without threats to their physical and mental safety.”

The report praises a trio of the Nordic countries of Norway, Denmark and Sweden at the top of the Index and their continuing democratic model where "freedom of speech flourishes", while Moldova (40th) and Bulgaria (91st) stand out this year because of the change of government and the hope for better conditions for journalists, even if oligarchs still own or control the media.