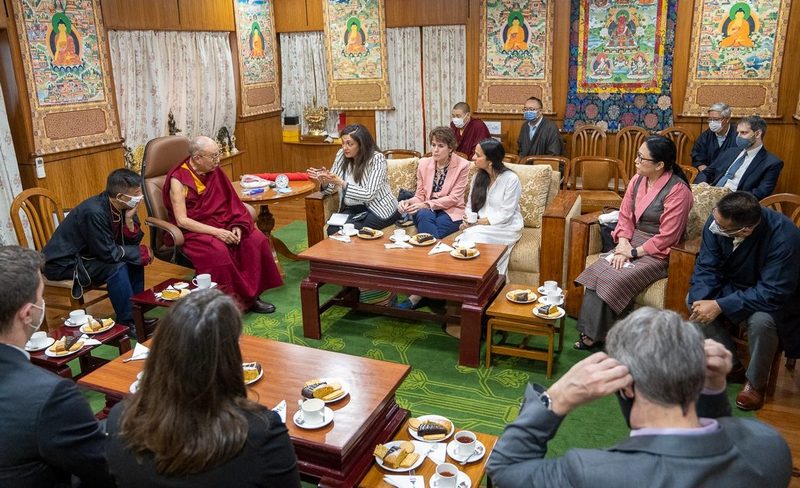 His Holiness the Dalai Lama meeting with Uzra Zeya, US Special Coordinator for Tibetan Issues, at his residence in Dharamsala, HP, India on May 19, 2022. Photo: Tenzin Choejor

The spiritual leader of Tibet described the US special coordinator for Tibet on Thursday that China had failed totally in its decade-long effort to change the minds of the Tibetan people in Tibet during their meeting, which discussed the importance of world peace and the abundant democracy and freedom in the US and India.

While conveying his warm welcome and gratitude to the US State Department delegation led by Uzra Zeya, His Holiness the Dalai Lama with his hearty laughter said: "I am very happy to meet all of you. Basically, as human brothers and sisters, we have two eyes and one nose, so we are all the same."

His Holiness has also spoken about "inner peace" as well as his lifelong "commitment" of universal values, religious harmony and the issues of Tibet.

'One of my commitments is the promotion of religious harmony', and all major religions carry a "message" of "compassion" and "forgiveness." It is "unique," the Tibetan leader said, adding, that the third commitment is to preserve our own "Tibetan culture" in Tibet as well as the Tibetan community in India.

Uzra Zeya, the special coordinator for Tibetan issues of the US government, expressed gratitude to His Holiness the Dalai Lama on behalf of the United States and its people during the meeting.

Zeiya said: "I am President Biden's special coordinator for Tibetan issues and I am honoured to be received by you. I bring greetings from our president and the American people, best wishes for good health."

The spiritual leader of Tibet highly valued the United States of America, saying: "America is a great country" and "democracy, complete freedom". "India is also a democratic country" and "all the different religious traditions live together" here in India and it is "a quite unique" phenomenon.

The Nobel Peace Prize laureate says it is clear that despite decades of efforts by Chinese communists to change the minds of Tibetans, they have completely failed. Meanwhile, the mindset of the Chinese is also changing rapidly. Socialism and Marxism are now gone, a thing of the past.

Zeya, also a US diplomat who served as undersecretary of state for civil security, democracy and human rights in the Biden administration, met senior officials and parliamentarians, including the Tibetan President and Speaker, as well as representatives of non-governmental organisations of the Tibetan community in India during her official visit.