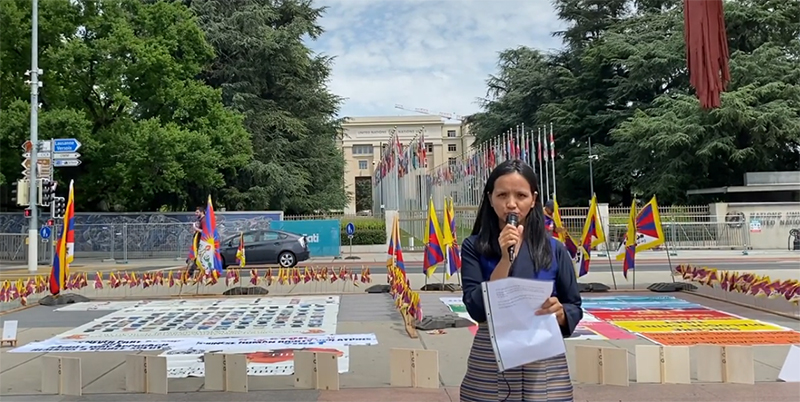 Geneva — Tibetan activists and supporters of Tibet in Switzerland protested against the Chinese government on the day of the forced signing of the 17th point of the agreement between Tibet and China, stating, "Tibet was never part of China, but the Middle Way remains a viable solution."

To mark the day of the forced signing of the 17th point of the agreement between Tibet and China, the Tibetan community in Geneva held a peaceful protest entitled "71 Years of Chinese Oppression and Occupation in Tibet" in front of the UN Office in Geneva on May 23, 2022.

Tibetan activists display the Tibetan national flag and photos of Tibetan self-immolators and the 11th Panchen Lama in front of the United Nations in Geneva, Switzerland, where the peaceful protest took place.

Kalden Tsomo, from Tibet Bureau Geneva, said, “ This is one of our most important historic days, during which our Tibetan delegations were forced to sign an agreement so called 17th point agreement and this was signed under force and threat of bringing more military occupation."

“From 1951 to 1959, the Tibetan government under the leadership of His Holiness the Dalai Lama, during that time, and our Tibetan government in Lhasa did every effort to enter into negotiations to have a peaceful settlement with the Chinese government,” she continues.

“But it was a Chinese government who has violated all points of the agreement that they have forced our Tibetan delegations to sign and because of which in March 1959, thousands of Tibetans were forced to come on the street to protest Chinese military occupation,” Tsomo added.

“So we are here to mark this day and so at the same time, we are taking this day as a reminder for our Tibetan youths to revisit our history to say that, Tibet was never a part of China. But because of the given situation and under the leadership of His Holiness the Dalai Lama, we need to have a peaceful resolution between Tibet and China," she said.

"The conflict between Tibet and China must be settled peacefully as soon as possible. Therefore, the Tibetan government-in-exile has proposed a Middle Way Approach, so that we can enter into a dialogue with China and find a peaceful solution,” she concluded.